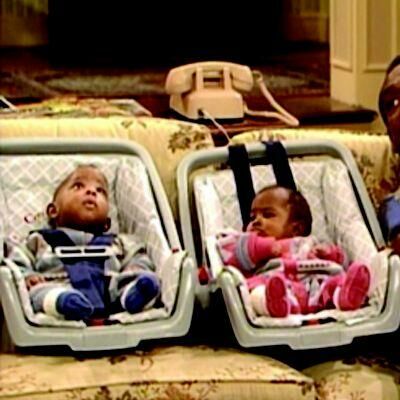 Before there was Modern Family, there was_ The Cosby Show_. Growing up, I looked forward to watching the humorous trials and tribulations of the Huxtable family each week. They were like every family, but not, because whatever issues Sondra, Denise, Theo, Vanessa and Rudy were dealing with were wrapped up neatly in a half-hour episode with a life lesson from their loving parents, Cliff and Clair.

Even now, watching reruns of the show is like my comfort food when I’m having a bad day. I recently realized The Cosby Show is still relevant, even all these years later.

Scene: the oldest daughter, Sondra, and her husband, Elvin, arrive at the Huxtable house with their newborn twins. Both sets of grandparents are there. They immediately grab the twins and start fawning over them. Sondra slumps into a chair, exhausted and ignored. Who cares about the mom? Bring on the babies! Elvin makes some bumbling attempts to include his wife; she huffs and glares at him.

Later, in the kitchen, the women all gather 'round the table and Sondra complains about how all she does is housework and take care of the babies, and how her husband’s life has barely changed. “Welcome to the club,” says Clair knowingly. “The I-didn’t-know-it-was-going-to-be-like-this club!” Three generations of women all nod and smile and start exchanging stories about when they were young mothers.

In the next room, the men are all sitting around trying to educate poor, clueless Elvin. Your wife needs a break, they tell him. Just smile and nod and say “Yes, dear.” Then, in his signature Cosby way, with his eye rolls and crazy sweater, Cliff proceeds to tell a funny story about when his children were small and he took them on a fishing trip to give Clair a break. Clair has a different memory of that time. Hilarity ensues.

Lying there on the couch, exhausted after a long day of parenting, it hit me like a lightning bolt: this is the story of my life. My struggles with motherhood and marriage are nothing new. They are as old as time, or at least as old as “The Cosby Show.” And they are something every mom experiences. Not only that, but at least the way Bill Cosby was portraying it, parenthood was actually pretty funny. New moms do get hysterical. New dads are clueless in the beginning. I looked over at my husband and he was chuckling, too.

And just like that, I forgot about all the stresses and messes that come with being a mom of little ones. At least for a half-hour.

What are your favorite shows to watch? Do you think parenthood is realistically portrayed on TV?