How to Handle Formula Pushers

You’ve made your decision — you’re breastfeeding (and that’s awesome!). But not everyone gets it. Here’s how to deal with the people who try to get you to switch to formula.
Save article
ByElena Donovan Mauer
UpdatedMar 2017 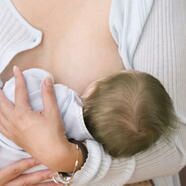 They say: “Here are your free samples of formula!”

You say: “No thanks. We’re traveling light.”

You may already have had those free samples of formula show up on your doorstep, or the nurses at the hospital may pack you a to-go knapsack full of samples. That stuff’s pricey, so it’s tempting to take it, but you really don’t need to. In fact, some hospitals are starting _not _to let formula companies give patients freebies, since that could send the wrong message to new parents. After all, breastfeeding is the healthiest way to feed baby. It will take some dedication to make it through the beginning, which can be tough (it gets easier though!), so power through formula-free as long as baby and you are both still thriving. Say no to the samples, or donate them to charity.

They say: “Aw, come on. Just a little bit of formula won’t hurt.”

Breastfeeding relies on a give-and-take relationship between your baby and your breasts. If baby’s drinking a different amount from what you’re producing, then you risk engorgement, and your milk supply could actually suffer later on.

They say: “It will make your life so much easier if you formula-feed.”

You say: “There’s _nothing _easy about being a new mom.”

It’s not like formula-feeding moms have it so simple. They still have to wash and sterilize bottles and nipples, and spend time and energy (and money!) purchasing formula for their babies. Plus, when they go out, they have to bring along powders and find clean water and ways to warm things or to keep them cold. You? Well all you need is you and maybe a nursing cover. You’ve got the two most perfect to-go containers with you at all times. And that makes things, well, a little easier sometimes.

They say: “You shouldn’t be the only one who gets to feed her.”

You say: “Yes I should — it’s better straight from the tap.”

Sure, a lot of dads and grandmas think they’ll bond with baby if they feed her, but there are other ways to bond with baby (like baby-wearing and bath time!). Plus, even breast milk could lose some of its nutrients if pumped and stored, so really, it’s best if you feed baby directly as much as possible. When feeding time is over, let dad or grandma take over with some other activity.

They say: “I didn’t breastfeed, and my kid turned out great.”

You say: “Of course she did! But this is right for me.”

Most people who push formula aren’t trying to be rude. They’re usually parents who did things a little differently — and it may be hard for them to hear that it might not be the best way to go. So if they try to push formula on you, try not to get too annoyed — and at the same time, don’t get pressured to do something other than what you know is right for you and baby.

How to Handle Breastfeeding Bullies