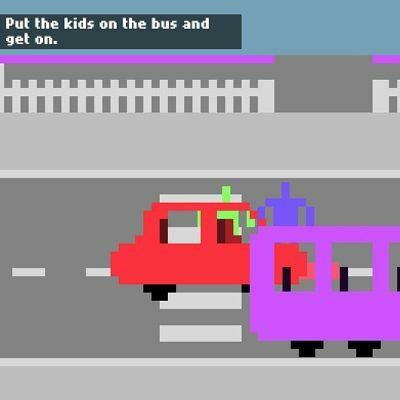 Safety proofing, multitasking, spending every waking hour attending to people other than yourself — so is the life of a parent. Doesn’t sound hard to you? A new video game may change your mind.

Jostle Parent , a simple, pixilated game, allows you to control a parent in charge of three little kids. And these little kids will make your life so difficult, even though they don’t roam much further than the house and yard.

Creator Pippin Barr explains the concept:  “It’s a game in which you are a parent taking care of your kids for the day, but in which the only action you can take is to ‘jostle,’” he writes in a post preceding the game’s development.

Basically, you need to push, shove and usher your children away from the dangerous, everyday objects they’re constantly meandering towards: electrical sockets, poisonous landscaping products, busy roads. The whole process is clumsy and purposefully frustrating, as those who have tried it can attest:

“Your destination in Jostle Parent is nearly always towards a child who is doing something they are not supposed to,” writes Cara Ellison for Kotaku.com. “Which, although I have never been a parent, seems a familiar situation that gives me a grim outlook on the prospect of ever becoming a parent. Who ever knew that kids could be so inconsiderate?”

“There’s more to this parenting simulator than this central push-and-pull struggle,” says Chris Priestman of Kill Screen Daily. “As you go about what should be mundane activities (mowing the lawn, eating breakfast) you begin to see the world exclusively by its many hazards. I guess you could call it ‘parent vision.’ Anyway, I actually screamed when one of the kids strayed near a faulty electrical output, nearly being killed by way of electrocution—I felt my heart physically leap against my chest.”

Like most video games, you have various lives. In this case, they’re represented by each of your three kids. And yes — you will inevitably kill one off.

“For me, trying to get all three little ones across a road and into a bus was the killer. Literally, I guess,” says Priestman. “Yep, at first I was run over by a car as we played with the traffic, and then, in another attempt, one of the kids was struck…I’m lucky as I can exit Jostle Parent and be done with my life as a parent (for now).”

So, moms and dads, there you have it: other people get it. We bet you can beat this game first try.