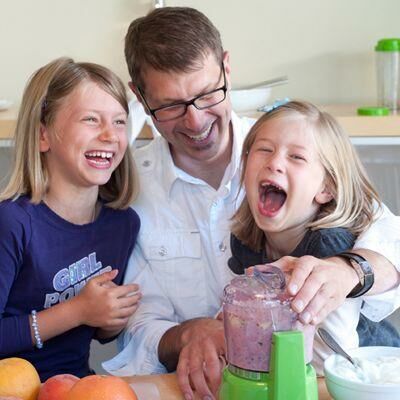 We’ve been hitting up moms who are entrepreneurs and businesswomen and finding out what it’s like for them to start and run a company. Now that we’re gearing up for Father’s Day, we thought why not get the behind-the-scenes scoop from a dad who’s similarly juggling career and family? And what better person to talk to than Neil Grimmer, whose company, Plum Organics was — and still  is — inspired by his two daughters.

The Bump: What inspired you start Plum Organics?

Neil Grimmer : I was a designer before this. Back in early 2000’s, I also was an Iron Man triathlete and distance runner, and I was making these crazy concoctions for myself so I could do these races. Everyone at work knew this, so one of the assignments I was given was to work with a food company that wanted to realize the future of food. What we came up with was that is was about healthy, more sustainable foods and that it was about healthy, sustainable businesses. It was a unique opportunity to not only create better food, but also a better company. Life changed, and I went from being a designer to being a dad.

When my kids were 1 and 3, my wife and I were packing healthy lunch boxes for my eldest, Paxton, in the morning, and making my youngest, Izzy, squash at 10:00 at night because we were working parents. We thought, there has got to be a better way to offer healthy food to our little ones. We had this idea that active parents needed to find ways not to compromise their values, even if they had crazy, hectic lifestyles. That’s where the food pouch came in. We needed to find packaging that would let us bring kids the healthiest food we could find. It had to be super convenient and as flexible as young parents needed it to be.

TB: So you were the first baby food company to use food pouches?

NG: Yes. That innovation has transformed the category. There wasn’t a whole lot of innovation happening, and baby food companies weren’t engaging young, modern parents who had very busy lives. So the innovation hit at right time. I think we were successful because we were a young, smart brand. We didn’t take it too seriously and knew all the follies of being parent. We wanted to be a brand for those young parents because we are our core consumer, in a way. Bringing that packing to the market meant we could make a product with Greek yogurt and quinoa, that’s jam-packed full of health and nutrition that never really had been a part of that category before.

TB: What are your top three pieces of advice for people looking to start their own business?

NG:  Make it personal. There are some great brands that I admire, and they all started with very personal connections to what they were doing. For me, it was being inspired by my two daughters and, quite frankly, by the challenge of being a young modern, parent. Everyone in our company has some connection to it, whether they’re parents themselves or they care about healthy eating.

Define the purpose of your business around a mission. How will you change the lives of who you serve? We talked about being advocates for tiny taste buds. Make sure everyone in your business knows that mission.

Take the leap. It can be really scary experience to start a company. There are often super talented people interested in starting companies, but they’re already well employed and have income that’s hard to step away from. You have to step out of that comfort zone to start a business and take a risk. If you get the first two things right — making it personal and having a mission — that will give you the confidence to take the leap.

TB: What was your biggest challenge in starting the company?

NG:  In the early days, the tough part was getting retailers to embrace the pouch. They already had their shelves stocked with jars, and jarred baby food companies were telling them it was a bad idea. We had to sell the vision. After that, when they started seeing sales and seeing that the consumer was interested, then it was easier. Later, it was the scaling of the business. We’ve had rapid growth in the past six years. We’ve had to match that with the size of the team and the production capacity, and that has been a challenge. Now we have 90 employees and three offices — Bay Area, New York and outside of London.

TB: What has been your biggest joy?

NG:  For me personally, bringing home a product that just launched and having my girls freak out about it is the best thing out there. Or if they say, “Hey, my friends want some fruit Shredz. Can you hook us up?” As a dad, I think we want to not only raise great kids but to also please our kids, and I get a ton of pleasure out of that.

TB: Looking back, is there anything you’d do differently?

NG:  There have been tons of lessons learned. It’s important for young companies to be really nimble and flexible. As a designer, I worked with rapid prototyping. That meant getting an idea out there quickly by mocking it up with duct tape and hot glue to look at, learn from and iterate on. I’ve used that concept to help build a business. Last year, we launched 45 products. Some worked better than others. You have to make sure you always have a foot forward and you’re always flexible to get something off the table if it doesn’t work out, and to try the next thing.

TB: Would you say that being a father make you a better businessman?

NG:  I would! We talk about this company being inspired by love. We have empathy at the core of what we do. I’m a huge advocate of that being our way of doing business. We’re about hugging it out, as opposed to fighting it out. We take a personal approach to everything we do in business.

TB: Plum is doing some exciting things to help children in need. Tell us about them!

NG:  We started our company to change the way kids eat in America. Our goal was to bring them the best food from their first bite. Once we became successful and gained a toehold in getting healthier foods to kids across the country, we became increasingly aware that there were 16 million kids we were not servicing. 1 in 5 kids in the US go hungry, even though it’s known as the land of plenty. I think it’s a travesty. We saw a pre-screening of A Place At the Table and were inspired to do something about that issue. We wanted to figure out what we could do to really solve the problem. At the end of the day, we designed The Super Smoothie, a product with the nutritional content to help hungry kids thrive to their full potential. We developed it with Dr. Alan Greene and it has spinach, white beans, carrots and chia. The product was designed to be donated, and along with our partners, we’ve donated a half million this year to be given out to little ones in need.

We believe that when little ones are full of the right nutrients, they have the potential to affect the world. I think the next phase of this is to figure out how to get consumers to really care about this issue and get them involved. We’d like to create a broader network to get this thing to scale bigger.