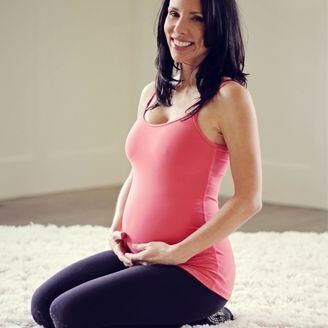 We’re getting up close and personal with mothers who are savvy innovators and businesswomen and finding out their secrets to success. This time, we got the scoop from Carrie Dorr, Founder and CEO of Pure Barre.

The Bump: Barre workouts are hot right now! Why do you think Pure Barre has become such a hit?

Carrie Dorr: It’s really great for hitting the areas women struggle most with. It’s a 55-minute total body workout that targets the thighs, abs, hips — everything! Now, it’s so popular and has been getting a lot of attention, so people think it’s new, but I started the business 12 years ago in 2001. I think it’s caught on because it really works. I’ve had women tell me they spent a lot of time working out without results on a treadmill and that this is the only technique that worked in changing their body.

TB: How did it start?

CD: I had been a professional dancer and a choreographer. After college and law school, I had to pay back my loans, so I was teaching group fitness at 5 a.m. while becoming a lawyer. Finally, I payed off all the loans and opened my first studio!

TB: What are your top three pieces of advice for women looking to start their own business?

CD:  Surround yourself with people who are smarter or have more experience than you. There’s so much to learn from people who’ve been through it, even if their business isn’t exactly the same as yours. For example, if you’re franchising, talk to someone in fast food who’s been through the ringer.

Think about what really want. Entrepreneurs tend to turn their passion into business. Make sure you look forward a few years and ask yourself, “What does that look like? Will I lose passion when it turns into a business?”

People take about fear and boundaries and worry that they’ll fail, so they talk themselves out of it. I never looked at the competitors. I just focused forward on where we were going.

TB: What was your biggest challenge?

CD:  I think the biggest challenge for me was dealing with growth. The thing about growth is that it brings with it a slew of issues, like needing more capital and cash, and overhead, and meetings and conferences and cubicles. For me, that was a struggle.

TB: What was your biggest joy?

CD:  My biggest joy was seeing how many women’s lives were impacted by Pure Barre.

TB: Looking back, is there anything you’d do differently?

CD:  I would have gotten a mentor really early on. I was a pioneer and flying solo. I didn’t learn until later to surround myself with people who knew the business. That would have been beneficial from get go.

TB: And so you’re now you’re a mom of one, and you’re expecting twins, right?

CD:  Yes, I’m pregnant with twin girls, and I have a boy who’s six months old. We might have broken the world record for having children close in age.

TB: Would you say you’ve changed as a businesswoman since becoming a mom?

CD:  Absolutely. Having a baby brings so much perspective to your life. For years, I went to seminars on life balance and it never registered with me how important that is until I had a baby.

Luckily, I have a great husband who’s a great dad. I’m very fortunate, because he picked up as much of the workload with the baby as I have, and that allows me to have balance. I find it easier than I’d thought I would to just shut off work and be with the baby when I’m home. We’ll see how it works when the twins arrive in the fall!

TB: You were an entrepreneur first — do you think that has made you a better mother?

CD:  Yes, being an entrepreneur makes me a better mother. I have to figure things out all the time, and I’m more solution oriented now. It’s the same with a baby as with a business — what works one day with five-month-old doesn’t always work the next day, and you need to come up with a solution. Now that I’m an entrepreneur, I think better on my feet.

TB: What are you working on now that you’re excited about?

CD:  We have two new Pure Barre DVDs — that I managed to shoot between pregnancies! — that will be released this summer. And there’s a new level of training for our trainers coming out this fall.