The blogger and mommy of one opens up about what it's been like breastfeeding her baby, Daniel. 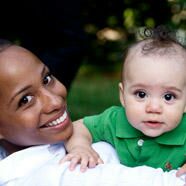 TB: Did you have any fears about breastfeeding?

KO: Oh, I heard that it hurt an awful lot. I heard that it’s tiresome and that it’s difficult to have other people take care of your baby for you if you have to breast feed the whole time. Nothing could be further from the truth. It’s really convenient, it’s free, and I’m able to bond with my baby a lot better.

TB: Did you have any difficulties in the beginning?

KO: In the very beginning I did have some difficulties. It was difficult for him to latch on. I think also because I was a little nervous that he was unable to latch on properly, so I pumped for a little while and then I used a shield for a couple weeks but after that he was breastfeeding like a champ.

TB: Did you ever think you might give up?

KO: There was a moment I wanted to give up because I realized I was the only one that could provide him with milk. All of the pressure was on me to do that. It was the first week and you’re just overcoming not being pregnant and having this new baby that’s awake every hour. Also I heard that formula keeps the baby sleeping for a little longer. Once he was up every hour on the hour and after about the fifth hour I thought maybe this breastfeeding thing isn’t so great after all. But we stuck with it and it’s really been great because my son is 22 pounds at 7 months. He’s really happy and well adjusted. I think that has something to do with my decision to do with breastfeed.

TB: Do you feel like it’s been easier in the long run?

KO: Well, it’s actually more convenient to breast feed because all you have to do is take the baby out of the crib, and attach him. Stick right on to the boob, and the food is right there. It’s the right temperature, it’s free, and the baby can get as much food as needs. You never have to make any late night runs out to the pharmacy to get a can of formula, and honestly you’re not getting milk out of can or a plastic container. It’s coming right from you.

TB: What do you feel about breastfeeding in public?

KO: Well, I was uncomfortable breastfeeding in public, so I used one of the hooter hiders. Or I guess they’re called breast-feeding shawls. I’m pretty comfortable breastfeeding in front of all women, and in public when it’s needed. I mean, we don’t cover our faces when we’re eating a salad or sandwich so I don’t think it’s really necessary to completely cover yourself when you’re nursing in public. It’s natural.

TB: What has been the best part of breastfeeding for you?

KO: Oh my gosh, I think the benefits are limitless. The bond with the baby… You have those two little eyes looking at you. You can feel him, and it’s just really warm and cozy. It’s just the best thing ever. I get choked up just thinking about how nice it was for me to breastfeed the baby from the very beginning. We’ll continue until he’s about one year old. And even though he has teeth we still march on because I know that he’s getting the very best that I can offer him.