The Gossip Girl actress dishes on life with two kids, being a green mama, and what breastfeeding was like for her. 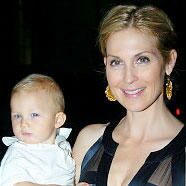 KR: Yes, it’s something I always thought I would do. And the more research I did the more I definitely wanted to do it. People said “But it’s so hard,” and “What if you can’t do it?” and I kept thinking, “What are they talking about?” And then it took me about six weeks to start breastfeeding my son. No one told me I was supposed to put my baby on the breast right away. Later with my daughter, I put her on the breast right away and had no problem. But I rested after the birth of my first son, instead of having him rest with me and put him on the breast. I think it makes such a big difference."

TB: They didn’t bring the baby right to you in the hospital?

TB: Did your own mom breastfeed?

KR: She did. She breastfed both me and my brother for a shorter period of time — about three to six months for both of us.

TB: Did you go to your mom then with most of your breastfeeding questions or did you turn to other people?

KR: I took classes. There’s a place in L.A. called The Pump Station, and I went there for a class on breastfeeding. They also showed us how to pump if we needed to pump. And then I had a woman in LA that I talked to who was really good. She didn’t believe in pacifiers and bottles and all of that. So I just really listened to other peoples’ different views on all of these things and took it all in.

TB: When you said you had problems nursing your first baby in the beginning, what was your biggest problem?

KR: It was a latching problem. And at that point, you know, I had a lady that came to the house and they were saying “You need to pump,” but then I said “Why should I pump? I should just breastfeed.” And it was very confusing. I think with the first child, it’s all kind of overwhelming unless you have a really specific person with you or unless you already have an understanding of it. People tell you all different things. So I didn’t know what in the world was happening.

TB: When was it exactly that things finally started to feel like they clicked?

KR: It took about six weeks. I took some herbs by Gaiam. They’re called “Lactose Plus” and really helped, because my milk really came in strong after that. A breastfeeding expert in L.A. named Cynthia Epps was the one who told me about them.

TB: How was it transitioning back to work while you were still breastfeeding?

KR: Well I didn’t work that much during the first year of my son’s life. I worked in Canada for a few weeks and then I did the pilot for Gossip Girl. But I didn’t work that much — I worked only four days on the pilot. So he would come to work with me and would nurse there. You know I probably should have pumped a little more at that point. It would’ve been less stressful for me and, you know, probably a little easier for him. But I was just trying to do everything and I sort of nursed on demand instead of having a real schedule. Later, with my daughter, it was very different. I was able to pump and she was more on schedule and I had more help so it was easier. I think if I’d had more help in the beginning with my son it would have been easier then too. In the end I wound up breastfeeding my son for two and a half years and my daughter for about nine months.

TB: Did you set a goal time for how long you wanted to breastfeed before you started?

KR: I knew I wanted to do at least a year, but I was sort of open to figuring out what was the best for both of us and what made sense. If my son didn’t want to breastfeed for more than a year I certainly wasn’t going to force him. It was one of those things I would really leave up to the child.

TB: Looking back, did you have any funny or awkward breastfeeding moments?

KR: If we were in public, people would always stare at me like I was funny, you know? But I mean there were women walking down Madison Avenue who were showing more boob than me! You know what I mean? There were advertisements in store windows that were more risqué than what I was doing and I figured it was more natural. It’s funny, I think the way the world looks at breastfeeding is a little upside down. It’s okay to have an ad with women with huge fake breasts that look engorged, you know? And then for me to breastfeed my child is somehow risqué or awkward.

TB: Was there a period when you were simultaneously breastfeeding both of your children?

KR: Yes. The funny thing is everyone says, “Oh no, you can’t get pregnant when you’re nursing.” Well, I got pregnant. And then they said, “Oh, your son won’t want to nurse when you’re pregnant because the milk changes.” Well, that didn’t happen, either — he nursed throughout the entire pregnancy. And then they said, “When the other child gets there he won’t want to nurse because it will be a competition.” But oh no, he still wanted to nurse. So at about two-and-a-half, I had to wean him because my daughter wasn’t getting enough milk. So there was a lot of scheduling. And I had gone back to work and I thought, “Well, I’m not an aborigine!” So I had to start pumping with my daughter because it became a lot. But yes, for awhile I breastfed both of them at the same time and they co-slept with me — and they still co-sleep with me.

What was the most random place you ever breastfed or pumped?

As for nursing, I would breastfeed walking down Madison Avenue, I would breastfeed on an airplane — I would breastfeed everywhere. On any airplane we went on everyone loved us. They’d look at me at first like, “Oh no, she’s breastfeeding. Oh no, we cant look over there.” And then by the end of the flight they would be talking to us saying things like, “Wow your baby doesn’t cry, your baby slept through the whole flight.” And I would say, “Yup.” And then I was pregnant out to here and nursing my two year old and nursing on the airplane and people were thinking, “Oh my God.” They couldn’t even believe it. They’d be watching a movie on the plane where people get blown up, but a pregnant woman nursing was shocking, like beyond. And then immediately my son would go to sleep and they’d be like “Oh ok.” So you know what I mean, it’s the trade-off. But it’s the most natural thing, and it keeps their ears okay on the flight. You just breastfeed when you take off and when you land so your child doesn’t have the ear problem. Another good tip: If you put a little breast milk in their nose when you’re traveling, they don’t get sick. I should’ve tried to put some up my nose so I wouldn’t get sick! But a few drops in their nose they say is good because it keeps the germs out.

TB: Lots of women talk about feeling like a cow the first time they pump — did you feel that way?

KR: I felt like the most un-attractive, disgusting… I couldn’t. With my son I tried to pump and I couldn’t. I just started crying. I remember thinking, “I can’t do this.” But then with my daughter it just felt okay, like I had to do it. And by then my boobs were already like… well, by then I was already a cow anyway! It’s an awkward thing. And it’s such a private thing that it takes a minute to get used to. But once you do it, its fine. I think it is just a big learning experience. And obviously pumping is something women don’t do or haven’t done until they’ve had a baby. But it’s all so worthwhile once you, you know, realize the benefits of it.

TB: What would be your biggest piece of advice to other moms who are about to breastfeed or who may be having trouble?

KR: The first bit of advice I’d give is to breastfeed right away after the birth, as soon as you can. And the other is to really just stay with it and trust yourself and trust your child that it’s natural. If you need to pump, pump. Everyone’s different and everyone’s circumstances are different. I think the point is, that you do it for such a short time in the big scheme of that child’s life, and your own life, it’s just really so important to do it.