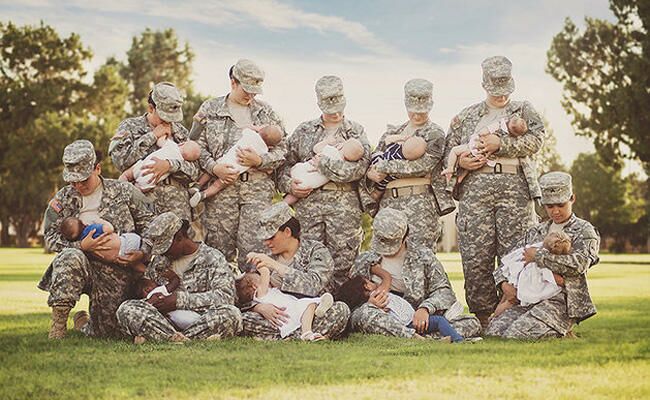 After creating a space dedicated to nursing, the Fort Bliss army base is experiencing its own Boobolution. And thanks to photographer Tara Ruby —  a former air force member herself — the news was is being virally depicted.

Ruby’s mission started out simply enough; photograph a military mom breastfeeding to hang in the new nursing room to show women "can be amazing mothers and soldiers at the same time.” With the help of the Fort Bliss moms’ support group, P3T, Ruby called out for women willing to nurse for the photo. Ten reported for duty, so to speak, dressed in full uniform.

On Facebook, Ruby thanked her participants, writing she believes they made history.

“I was active duty a long time ago when support for breastfeeding moms wasn’t even an option or a consideration,” she posted. “We have come so far. Breastfeeding their babies doesn’t make them less of a soldier, I believe it makes them a better one. Juggling the tasks and expectations of a soldier, plus providing for their own in the best way they possibly can, makes these ladies even stronger for it.”

She ends with a call to action that we fully support: “I am 100 percent for  #normalizebreastfeeding. How about you?”