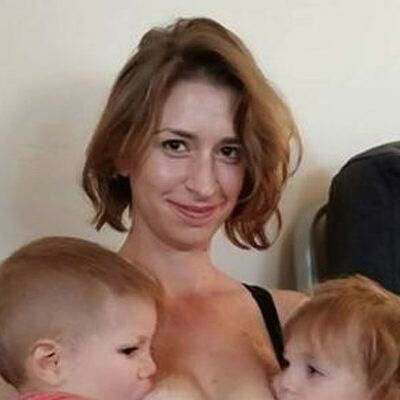 Jessica Colletti has been pulling breastfeeding double duty for nearly a year. But she’s only making headlines for it this week.

The 28-year-old from Pennsylvania is a stay-at-home mom and first-time parent to son Lucian, 16 months. During the day, she also cares for 18-month-old Mateo. She breastfeeds both boys, and shared a photo of herself nursing them during last week’s  World Breastfeeding Week. While the purpose of the week is to normalize breastfeeding, plenty of commenters deemed Colletti’s cross nursing anything but normal.

Some called it disgusting; others asked what was wrong with her. But Colletti expected the backlash, and remains unfazed.

“I know I’m doing the best thing for my babies,” she told the New York Daily News. “No one could sway me or tell me otherwise.”

She explains the boys have become “milk brothers.” Interestingly enough, Colletti didn’t even know Mateo’s mom, Charlie Interrante, until they met at a photo shoot for new moms last year. Interrante had been feeding Mateo formula while she went to work at a barber shop, and he was experiencing constipation as a result.

“Breastfeeding my friend’s son came naturally to me,” Colletti told Mama Bean. “I started babysitting him when he was five months old and the first time she dropped him off to me I asked permission to nurse him, since I was already nursing my three month old. She responded with an enthusiastic yes, because he was having issues with the formula his previous sitter had been giving him. My friend struggled with breastfeeding in the beginning and succeeded for nine months. She was always very happy that her son had the nutrition and comfort he needed while she was working. Being able to breastfeed her little boy has created a special bond between us all, a bond I will always cherish.”

That bond has become so strong that Interrante and Mateo moved in with Colletti, her husband and Lucian.

So what’s the deal with milk sharing? Is it safe? The FDA doesn’t condone using donor milk directly from an individual or from the Internet, because both sources are unlikely to have been screened for contamination or infectious diseases. However, cross nursing is not a new phenomenon; wet nurses have been around for centuries.

“It’s a special bond between us all,” Colletti says.