Moms Don’t Play Cars With Their Sons? I Beg To Differ! 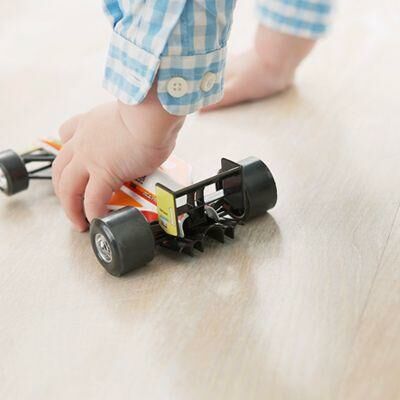 I recently read an article about Mattel’s attempts to boost the sagging sales of their Hot Wheels line by targeting moms and “teaching” them how to play cars with their sons, thinking that this will make them more likely to buy them for their kids.

Admittedly, I am a total girly-girl who grew up with a sister and was obsessed with Barbies, so I never played with a Tonka truck or Matchbox car until my son was born. I didn’t know a digger from a backhoe. And I had no idea that all these different cars – that I lumped together and referred to as “race cars” — each had their own name and personality. But trust me when I ( proudly ) say that I am now quite well-versed when it comes to construction vehicles and “hot rods," thanks to my son.

Even as an infant, he was immediately drawn to anything that had wheels, making “vroom, vroom” sounds before some of his first words. Although I didn’t have the slightest clue how to “play cars,” and couldn’t understand his utter fascination with them, I learned. I learned by watching my son, by following his lead.

If his cars were crashing, I made sure my cars had the most dramatic and noisy collisions. I didn’t complain when he assigned me the “jalopy” car when lining up the vehicles on our family room rug for the big race.  And when he asked me to read “Hot Wheels Super Stunt Show” – a poorly written book we picked up at a yard sale and was clearly published in the 1980s – I read it to him night after night, nearly memorizing the darn thing.

The reality is that playing cars was something my son, who is now 6, absolutely loved when he was younger. So that’s what I took pleasure in when we played together: his joy, his passion, his ability to create an elaborate obstacle course race track. Sure, I would have preferred playing a board game, but it’s not about what I wanted. All that mattered was that I was spending time with my son doing something that he enjoyed – even if I didn’t really “get it.”

And that’s why I don’t know what to make of Mattel’s claims. I understand moms drive the toy purchasing in most households, and there are many of us who were not exposed to the world of Hot Wheels before welcoming our sons. But I’ll go out on a limb and say most of us just want our kids to be happy. Just because I don’t understand the fascination with cars doesn’t mean I won’t buy them for my son who adores them. It would be like saying my husband won’t buy dolls for our young daughter because he doesn’t know how to play with them.

Today, my son’s cars sit neglected in a box in his playroom. He’s moved on to Legos and video games – things he can play with independently. He’ll only occasionally ask us to join him, and he’s starting to read books on his own. I never thought I’d say it, but now I kind of miss our days of racing teeny tiny cars around the kitchen and reading stories about  cars named “Rocket-Bye-Bye.”

The 18 Best Newborn Toys to Engage Your Little One
ADVERTISEMENT Barbie Gets a New Look Exclusively for Toddlers

The Best Toys for 8-Month-Olds, According to Experts 10 Terrific Toys You Can Get Delivered Before Christmas

The Best Toys for 4-Month-Olds

The Best Toddler Trampolines to Make Them Jump for Joy Amazon Slashes Prices on Best-Selling Toys Ahead of Holidays