No Judgy Strangers, Lots of Avocados: What Parenting in Mexico Is Like

From the significance of braids and pierced ears to the communal approach to parenting, here’s what an American mom has learned about motherhood in Mexico. 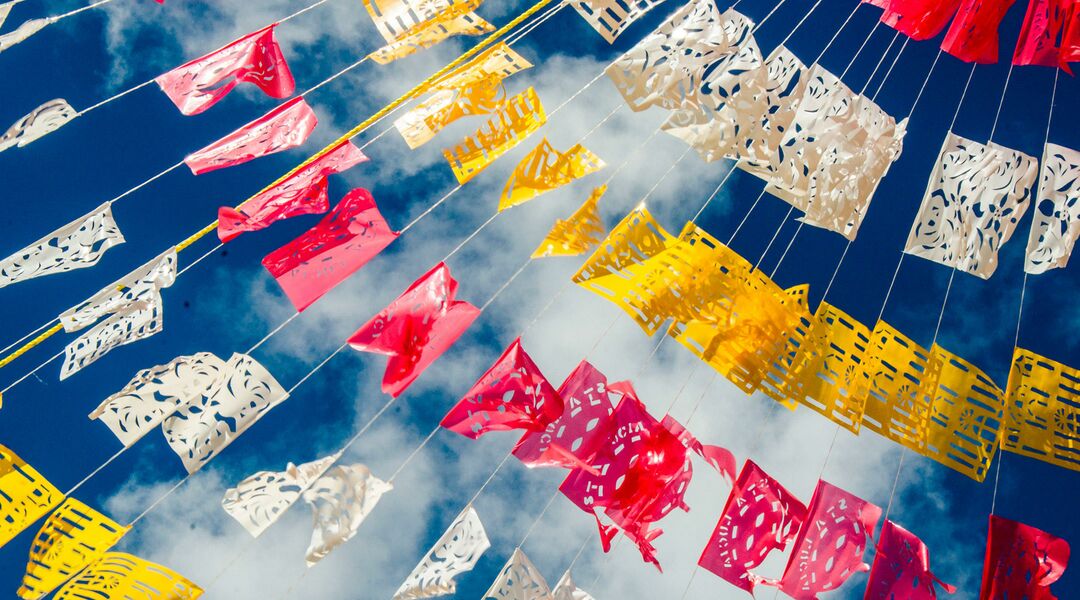 Raising children is one of the most universally rewarding experiences, but the realities of parenthood can vary dramatically around the world. Christine Gilbert, an American mom of two, is getting a first-hand look at how different—and often how similar—parenting in a foreign country can be. When she was seven months pregnant, she, her husband and their young son moved from the US to Oaxaca, Mexico, an inland city to the south, widely considered to be the country’s cultural and culinary heart. We caught up with her to learn what life as a mom in Mexico has been like.

What was the biggest culture shock when you arrived in Oaxaca?
We enrolled our children in a private bilingual preschool as soon as we arrived, and we were completely overwhelmed by the number of fiestas, celebrations and performances our children were involved in. My phone was blowing up with text messages (en Español) from all the other mothers as we tried to find the exact right tights for the Independence Day celebration and searched high and low for the very specific canastas (baskets) for the Day of the Dead parade. I absolutely love the culture and the near constant festivities in Oaxaca, but I was unprepared for what that would mean as a parent with two small children in school!

What’s the best part of raising a family in Mexico?
It is so endearingly family-oriented here. I don’t feel the same judgment or pressure about having my children out and about with me. Sometimes in the US someone gives you the side-eye if your child is running around, but in Mexico, they just crouch down to the child’s level and say something like, “Hey, slow down, be careful.” They don’t stand back and judge, and if they deem there’s a real issue, they’ll jump in. Otherwise they’ll let you be. There’s not as much competitive parenting either—although having your daughter’s hair properly braided is a must if you want to be considered respectable. (I have to admit, with my daughter’s wispy blonde hair, I’ve failed massively on this front and everyday my daughter’s teacher would send her home with a different, expertly executed style. Finally, when she came home with a fishtail bone braid, I started watching YouTube videos to get caught up.) Still, it’s more laid back (no Pinterest-inspired birthday parties) and more focused on community.

How does delivering a baby in Mexico differ from delivering in the US?
I’ve had two births, both c-sections: One was in the US, where I had a midwife and delivered at a hospital, and one at a private hospital in Mexico. In almost every way, the care was similar. However, if you’re looking for midwives or water births, those aren’t really an option here; you’re definitely looking at a more traditional approach to birth. But all the tests and medical care were very good here.

In my case, I wound up getting induced. When we arrived at the hospital, it felt like checking into a hotel: The rooms were spacious, there was a bed for my husband and a full living room for waiting family, all within my hospital room (granted, it was in Puerto Vallarta, a big beach destination). I had two nurses assigned to me. In fact, I was the only birth that week. The c-section went as expected, although I found that as soon as I was given the epidural, it made me loopy and I completely lost my ability to understand Spanish. It was a strange sensation to sit there listening to Spanish and not understand any of it. I was glad I didn’t have to communicate—everyone spoke English as well; it was a bilingual hospital. Once the drugs wore off, this strange effect went away.

The one aspect of my care that I didn’t like was after the birth. They separated me from my daughter for about an hour to put me in a recovery room, and when she was finally brought to me, the pediatrician kept wanting me to supplement with formula. It wasn’t hard to push back, but I suspect that while breastfeeding is considered the healthiest way to go in the US, in Mexico there’s a feeling that if you can afford formula, why not use it? They definitely didn’t seem to understand why I was so forcefully opposed to it. At the end of the day, childbirth in the US cost over $20,000 (completely covered by insurance), but in Mexico it cost only $2,700 (private hospital, out of pocket).

Were you surprised by any Mexican customs when it came to caring for a newborn?
If you have a baby girl, they always pierce her ears. Always. It’s such an entrenched tradition that people can’t tell the baby’s gender unless the ears are pierced. Everyone talks to you if you’re carrying a newborn, so I got asked her gender many times (since Spanish uses masculine and feminine nouns, to say “child,” you have to know the gender) and the follow-up was always, “Where are her earrings!” Women would tell me how to do it myself with a needle and an ice cube, or a piece of lime, or give me directions to the public health office where they do it for free.

What are some typical first baby foods in Mexico?
Our daughter’s first food was mashed-up avocado. They grew on our neighbor’s trees and we’d have dozens at a time—we had so many, we didn’t know what to do with them all. There are Gerber baby foods in the grocery stores, but I think a lot of parents just make their own. We also fed her mango and banana early on.

How is raising kids in Mexico different from raising them in the US?
In a lot of ways, Mexico and the US are very similar, but one of the biggest differences is the cost of living. To have a three-bedroom house, a car and send our kids to private school, we only need to make about $30,000 a year. It gives us a lot of flexibility as professional creatives (I’m a writer and my husband is an artist). We get to choose projects that speak to us without having pressure to have every project pay extremely well—all without sacrificing what we can give our children.

Another major difference: Mexican parents understand that life doesn’t end after kids. I feel like in the US, at least in some circles, there’s a sharp line between what’s “for kids” and what’s “for adults.” Would you pass around shots of tequila at your daughter’s 2nd birthday party? In Mexico, the whole concept of a children’s party is foreign. It’s just a party. Every generation is invited. There’s music, food, drinking, piñatas (yes, often more than one) and everyone comes. They don’t compartmentalize their lives as much.

Tell us about the general parenting attitude in Mexico.
I think it really depends on the family’s income. It’s easy to visit to Mexico and see kids playing in the street and assume it’s all free range, but upper-middle class families largely live in gated communities and their children’s days are as structured as those in the US. Broadly speaking, parents are extremely warm but authoritative with their children. There’s a community mindset to raising children, so everyone is involved—not just your family, which tends to be huge and multi-generational, but the school is deeply involved as well. At our school, we had monthly parenting lessons, which were required events. They talked a lot about effective communication with children and the importance of spending quality time together. It really felt like everyone was invested in raising the next generation of kids.

What’s it like to breastfeed there?
People do breastfeed in public and it’s less hidden than in the US, where you’ll see a woman trying to wrangle a baby underneath a blanket. In Mexico, it’s not uncommon to see a women just casually take out her breast and feed her child, no big deal.

How do families typically handle childcare in Mexico?
Most people work, so family members help out until the child is old enough to go to preschool (around age 3). There isn’t really daycare, because jardin de niños (essentially the public preschool) are so prevalent. There are some nannies, but that’s an option typically reserved for the most affluent families.

What was the funniest parenting moment you’ve had while abroad?
Trying to get school supplies from a four-page list written entirely in Spanish, but realizing way too late that some of the items had typos. We didn’t need “little lungs” (_pul_moncitos), we needed magic markers (_plu_moncitos). The guy at our local Office Depot thought I had lost my mind. “Little Lungs! Little Lungs! Do you have any? I don’t know exactly what they are, but it’s for my son’s school.”

What do you hope your children learn from their experiences living outside the US?
I really want my children to have a global perspective of the world and to never think of “us” and “them.” I hope they’re learning that not everyone has had the same life experience and not everyone thinks the same way, but hopefully they can have empathy and understanding for our differences.