Welcome to the Mommy Lunch Room 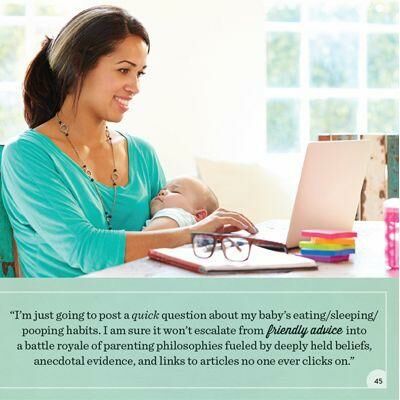 Photo: PARENTING IS EASY by Sara Given / Workman Publishing

Meet Sara Given, a first-time mom who’s found her place in the online parenting world by poking fun at it. Her blog “It’s Like They Know Us” rounds up all those ridiculously idyllic parenting stock photos you hate so much and adds the snarky captions they deserve. You can pre-order her book,  Parenting is Easy! (You’re Probably Just Doing it Wrong), available Oct. 6.

When our first baby was born, I thought I was prepared for how my life would change. The crying, the pooping, the sleep deprivation were all things I expected. There was one thing I wasn’t prepared for, however, and that was a hormone-fueled identity crisis.

The pre-baby me was confident and self-assured. I wrote professional journal articles and went to work in clean stylish clothing that did not have banana mashed on the shoulders. But now I was a “Mommy," and it seemed like society (via the internet) really wanted me to commit to which type of mommy I would be. I felt like I had just wandered into a giant “Mommy Lunch Room” and realized I had nowhere to sit. If you’d like to picture it, the “Mommy Lunch Room” is exactly like middle school, except everyone is sleep deprived and eats table scraps in panicked gulps while standing over a sink.

So I began awkwardly trying to find my “table.” Was I the earth mother? The foul-mouthed tell-it-like-it-is mom? The baby wearer? The Pinterest mom? The attachment parent? The non-attachment parent? The semi-detached townhome parent? I suddenly felt like a 12-year-old version of myself, clinging awkwardly to a Lisa Frank binder and hoping someone would just pull the fire alarm.

Meanwhile, my well-meaning friends added me to online “mommy groups” left and right, hoping one would click. Everywhere I looked, I saw lots of mothering mantras, but I didn’t see me. Deep down, I worried that perhaps I needed to change something about myself in order to fit into the pre-established system. That or pull the fire alarm.

Then one fateful day, a friend added me to a Facebook group for The Longest Shortest Time podcast. As I quietly lurked in the Internet shadows, I started to see women like me. They were funny and weird, and also had no idea what they were doing. When they asked questions, the other group members responded with kindness and levity. I had finally found it! I found somewhere to sit! People were being nice to me! Lisa Frank stickers for everyone!

It was my new friends that inspired me to create my Tumblr  “It’s Like They Know Us.” The blog was the result of a hilarious comment thread on mommy marketing gone wrong. Women in the group were posting advertising images of postpartum moms with six pack abs, pregnant ladies sleeping in full makeup, and women pumping in evening gowns. As the pictures rolled in, I started to caption them and the group told me to run with it. It’s Like They Know Us became my way to rail against all of the media and advertising that made me feel so much doubt in the early days of motherhood. Added bonus: It turns out I really like making fun of things to make myself feel better. My new lunch friends cheered me on every step of the way. Finally, I had found my new identity as a mother (it wasn’t fundamentally different than who I was before, just more exhausted and always covered in banana.)

It was social media that fueled my motherhood identity crisis, but it also provided the solution. The beauty of the Internet is that there is a place for everyone at one table or another, and if you can’t find one, you just make your own. Until then, you’re welcome to come and  sit with us.