Parenting According to The Guncles 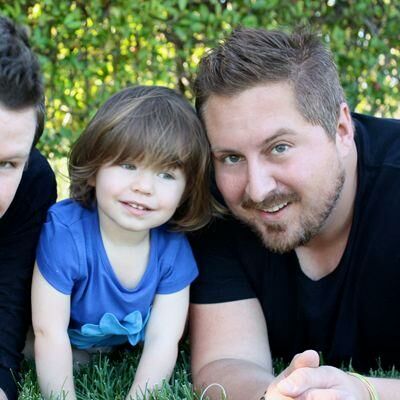 You may know Bill Horn and Scout Masterson, “The Guncles,” from Tori & Dean: Home Sweet Hollywood. They’re the adorably warm couple who, as the first gay parents on reality television, gave the world its first glimpse into what parenting as two dads is really like. Bill and Scout chatted with us candidly about the terrible twos, their funniest dad moments and their (free!) adoption mentoring program, Hold My Hand.

The Bump: Simone turned two in June. Have you experienced the “terrible twos” yet?

Scout: She loves practical jokes and trying to trick us, so we’re very careful about falling into those traps. When we put her down at night, about an hour later, she’ll get up and say, “My tummy hurts,” and, “I need to go to Daddies’ bed.” The first time she did it, we said of course! Then she asked us to kiss it to make it better and proceeded to lay down with her arms behind her head and said, “Ooooh, so much better!”

Bill [laughing]: Yeah, we caught on to that one quickly. Going through these terrible twos, we say, “Use your words.” One of the most annoying things is when she goes from 0 to 60 over the fact that she can’t reach her juice. We don’t want to make a huge deal out of [the tantrum], but we definitely want to put the kibosh on it.

TB: It’s hard to know sometimes that it’s not actually a nightmare or a tummy ache!

Bill: A tip for parents: Don’t be afraid to put the kibosh on something you know is wrong. I’d wake up at 4 a.m. and she’d be at the side of my bed, screaming, “Let me in the bed!” One night I went to bed snuggling our Chihuahua, Jessica, and when I woke up at 5 a.m., I was spooning with Simone.

TB: Do you guys have good cop/bad cop roles in parenting?

Bill: Scout could disagree, but I think I’m probably more of the bad cop.

Scout: I do have Bill put Simone to bed. He does the final shutting off of the lights, and he always says she’s going to hate him for that. When I do it, I find myself in the “Okay, what else do you need?” mode.

TB: How do you guys split up responsibilities at home?

Scout: In our home, we pick up where the other one leaves off and keep everything moving forward. We don’t leave something sit and say, “That’s your chore.” We have my mom as our “granny nanny” who comes a few days a week while we’re working.

TB: How do you make time for each other now that you’re parents?

Scout: Well, we work together…so we see each other plenty! We’re on the show regularly and out there publicly doing events together, which is just the two of us, so there is a break.

Bill: Honestly, we’ve found we’d much rather do something new and exciting as a family.

TB: Simone has her own fashion blog! Is there anything Simone loves to wear that you can’t stand, or vice versa?

Scout: She has an opinion about everything she wears, and she’s very fashionable. She won’t wear sneakers without pink in them. Shopping for shoes is hard because we’re not into the light-up shoes and shoes with 75 colors of glitter on them.

Bill: It’s been funny to see her gravitate toward pink. We didn’t push it or do a lot of princess stuff as a baby, but she’s really gravitated toward it. We have our own dad sign language when we’re in a store shopping, where I point to Scout and he’ll block the shoes before she can see them.

TB: That’s so funny! Okay, I want to talk about Hold My Hand , your adoption mentoring program. Can you tell me more about what you guys do and how people can get your help?

Scout: It started when we went through the adoption process with Simone [three and a half years ago] on Tori & Dean: Home Sweet Hollywood. We found ourselves getting a lot of emails and questions from people in the [adoption] process. We launched Hold My Hand officially last November during adoption month. Since then, we’ve helped about 100 families! We handle everything from helping people assess their situations and get the process moving to helping pick things out in a nursery. We’ve gotten emails in the middle of the night with the first pictures of adopted babies we helped place, which is really exciting. We have our amazing daughter now, and we want to help others make their dreams come true too.

TB: Do you have different advice for same-sex couples adopting, or is it the same process that everyone goes through?

Bill: Generally, the overarching process is the same, except there are different rules in different states that are more accommodating to gay couples than others. You just have to do your research and know what the law is and what the hurdles will be.

Scout: We’ve helped, and love to help, all kinds of families. Anyone who reaches out to us, we will help them. Same-sex couples, single moms, families who have had other children naturally and want to expand their families, single gay dads…all kinds of families. We’re starting the process of adopting again, so we’re right there with them.

TB: We all go through similar things as parents, and from what I can tell, your family is just like mine, but are there things that are unique to being two dads?

Scout: Our home is a lot like everyone else’s. Now that Simone is in school, we’ve definitely had to explain she has two dads and other people have a dad and a mom. But another classmate of hers has two moms. That’s one of the reasons we love doing a reality show, is that we get to show people we’re just like everyone else. There are examples of gay families on television now that are so exaggerated, that I’m glad that as a reality-based show, we’re able to show the way it really is.

Bill: I think there are two things that are really different for us. One is some of the reactions we get from the outside. We get questions like, “Who’s the female and who’s the male?” Most of the time, it’s coming from a good place, but it can be hurtful. Also, one of our biggest hurdles is potty training. Obviously, she can’t go to the ladies’ room by herself, and when men go to the bathroom, they’re pigs [so we don’t want to take her in there]. So we got this little portable potty that pops up that she can use.

Scout: We get irate when we go to a place and they don’t either have a changing table in the men’s restroom or a have family restroom. It’s not about us being gay parents; it affects all dads. The message is to women that it’s your job to change the baby — it’s 2012, and our families are operating in all kinds of ways.

TB: Besides your must-have on-the-go potty, are there any other baby gear items that you can’t live without?

Scout: I don’t know what we’d do without our Origami stroller.

Bill: We’d have to fold and unfold the stroller ourselves. Who wants to do that?

Scout: Well, yeah! And we use Skip Hop products every day. Simone walks into the school with her Skip Hop backpack and is currently packing her Skip Hop Zoo luggage for our weekend getaway.

Scout: We were at Target last week and we were looking for a new kids’ shampoo. She’s decided her shampoo needs to smell like strawberries. So I’m looking at the section and I’m saying, “I don’t know, Simone, I’m not seeing anything like that,” trying to get her over to the Burt’s Bees ones. So she said, really loudly, “Bend over!” I said, “What?” She screamed, “I SAID, BEND OVER!!” Everybody in the section was looking at us.

Bill: I gave Simone water at bedtime and she said, “I don’t want water. I don’t like water. It sucks.” I have to watch what I say!

Plus, more from TheBump.com

Adoption: What are your Options?