The Facts About Pneumonia in Kids

Cold and flu are as inevitable as lost mittens when it comes to kids in winter. Here’s how to prevent matters from getting worse. 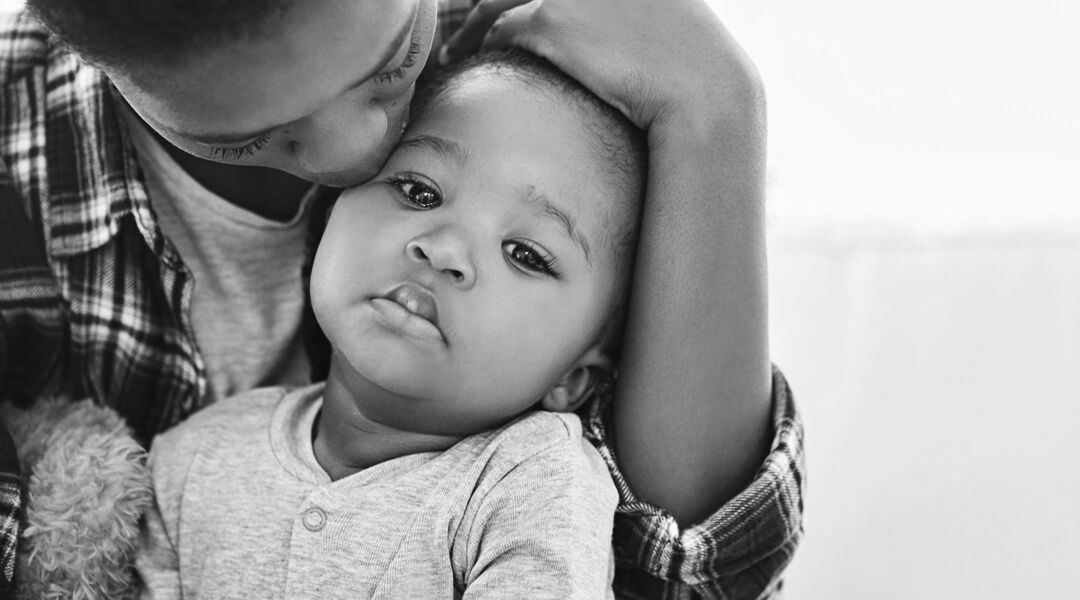 “Was this disinfected?” said no toddler ever. We’re guessing your little adventurer loves to get his hands on everything, even if a toy was just licked by a snotty-nosed friend—making preschools, day care centers and most public places precarious spots during the cold and flu season. Since the viruses associated with cold and flu can occasionally lead to pneumonia—a lung infection that inflames the air sacs—it’s easy to get frazzled about all the germs floating around in the cold months. Here’s what you need to know about pneumonia in kids to keep your toddler healthy.

How Do Toddlers Get Pneumonia?

Pneumonia in toddlers and kids is most often caused by a virus: namely, respiratory syncytial virus (RSV), which is a rhinovirus linked to the common cold, and influenza, the flu virus. Bacteria, such as streptococcus pneumoniae and sometimes the kind associated with strep throat, can also cause pneumonia in toddlers, particularly when there’s frequent direct contact with other kids, such as in the case of toy sharing. While viruses and bacterial infections occur year round, many doctors believe they spread more easily in the colder months between October and March, since everyone is spending more time indoors.

Both pneumonia-causing bacteria and viruses can be spread via droplets (sneezing, coughing, using hands as a tissue) and infected surfaces (tables, toys, soft gyms). Bacterial pneumonias are largely the result of colonization of the nose and throat, which, in some individuals, progresses to infection of the lungs, says Amesh A. Adalja, MD, an infectious disease physician and senior associate at Johns Hopkins Center for Health Security in Baltimore.

Each year, the incidence of pneumonia in children 5 years old and under is about three to four cases per 100 children, according to a study in the American Family Physician. “In general, the younger the child, the higher the chance of requiring hospitalization for pneumonia,” says Marc Chester, MD, a pediatric pulmonologist for Novant Health in Charlotte, North Carolina. Kids, especially those under age 5, are more susceptible to pneumonia because they’re often in close contact with other children in day care centers, where germs can easily be passed during a critical time in the development of their immune systems.

But just because your toddler has pneumonia doesn’t mean she’s hospital bound. Toddler pneumonia, which are typically viral, can also be mild and subside without wreaking too much havoc on the child. “Some [cases in] kids resolve right away,” says Christina Johns, MD, a pediatrician and pediatric emergency physician in Annapolis, Maryland. “Others have a residual post-infectious cough or wheeze that can last for weeks. Recovery time is impossible to predict.”

While a child might catch a type of virus that’s behind viral pneumonia, she may not necessarily end up with pneumonia. “It’s not always passed with a sneeze,” Adalja says. “It’s not instantaneous.” In other words, once a toddler (or grown-up, for that matter) is infected by a virus in the upper airways, she may experience cold or flu symptoms, but they won’t necessarily turn into pneumonia. That’s because the germs may just stay put and never spread to the lungs.

As for bacterial pneumonia, it’s far less contagious, and you won’t even notice symptoms when that bacteria colonizes the upper airways. Like pneumonia of the viral type, the bacteria may stay right there until the immune system fights it off. Or, it may even remain forever, without ever making it to the lungs. What causes a colony to move to the lungs is complex, Adalja says, and can involve a variety of factors, including a person’s genetics, his immune system, the presence or absence of another viral infection, and the amount of colonizing bacteria present.

Toddlers may also be prone to something called “aspiration pneumonia,” which is caused by a foreign, non-sterile object that obstructs airflow and interferes with the normal function of the airway, making lungs predisposed to an infection. This has actually been known to happen when a toddler sticks something up his nose, like a pea, which descends into the lung.

Signs of Pneumonia in Kids

“Common cold congestion should clear up in a few days,” Chester says. “If you’re not seeing a difference in three to five days, it can be a sign of pneumonia.” Typical pneumonia symptoms in kids include:

• Fever. There’s no magic number for how hot a temperature needs to run to signal pneumonia. “A fever less than 100 degrees Fahrenheit isn’t as concerning for pneumonia,” Johns says. But a high fever combined with other symptoms like a loose cough; chest pain, congestion and contractions; and shortness of breath can be potential signs of pneumonia in kids (see below). At the same time, he also adds, “I have seen a few kids with pneumonia and no fever.” The takeaway: Don’t let the number on the thermometer be the sole diagnosis.

• Chest pain. Breathing and coughing can cause tenderness in the area surrounding the rib cage. Since your child is not likely to describe what’s bothering her, asking where it hurts can help zero in on the symptom she’s actually experiencing.

• Cough. “A hallmark symptom of pneumonia is a cough,” Johns says. “It can be any type, wet sounding or even dry.” Toddlers may struggle with effective coughing, which is the body’s way of clearing out infection from the lungs. Encourage your toddler to “blow out a pretend candle” while coughing, Johns says. This will help make the cough more productive.

• Phlegm instead of snot. Deciphering what your toddler spews out in a tissue can help you determine whether she has pneumonia. A nasal drip that’s typically associated with a cold is mucousy and probably green or yellow in color. In pneumonia, coughed up phlegm is going to be thicker, pinkish and possibly flecked with blood. That’s because the airways are adjacent to blood vessels, and coughing can make the phlegm blood tinged.

To identify signs of pneumonia in kids, a clinician will listen to your toddler’s lungs. A crackle sound—which tends to be heard louder on one side of the lung than on the other—is often a sign of bacterial pneumonia. Viral pneumonia can be detected with a nasal swab analysis. This is often not necessary, though, since the treatment is similar to that of your typical cold and flu, John says.

In cases where a physical exam leaves a pediatrician on the fence, a chest x-ray is the best way to confirm lung inflammation caused by pneumonia whether it’s bacterial or viral.

Once pneumonia is confirmed, here’s what you can do to relieve the symptoms and assist with pneumonia treatment and recovery:

• Antibiotics. A 10-day dose of amoxicillin is often the go-to treatment for bacterial pneumonia in toddlers (and everyone else). Make sure to administer the medication exactly as prescribed and complete the dose, even if your child seems to be feeling better within the first few days. Unfortunately, there is no antibiotic for viral pneumonia—the best course of action is to calm the symptoms (so keep reading).

• Fever reducers. To relieve fever and discomfort in toddler pneumonia, you can typically give her acetaminophen (Children’s Tylenol) or ibuprofen (Children’s Motrin). Check with your pediatrician first to make sure you have the right dose.

• Honey. “Honey has been studied and proven to work to help with coughing in children over the age of 12 months,” Johns says. “Giving a teaspoon or two of honey every four to eight hours is safe and can improve the cough symptoms.” Forego over-the-counter cough and cold medications, though, which have unwelcome side effects and no concrete evidence for providing good results.

• Saline drops and sprays. Saline, a saltwater solution, is one of the most effective home remedies for pneumonia in kids because it helps clear secretion out of airways, Chester says. The salinity helps thin the mucus to assist with coughing. Nose aspirators, such as a suction device like a NoseFrida or a rubber bulb syringe, work great on toddlers who haven’t yet mastered nose blowing.

• Clear liquids. A toddler with pneumonia may not have much of an appetite, but hydrating with clear liquids with electrolytes and sugar can help provide some energy. “Electrolyte replacement fluids (such as Pedialyte) mixed with a little bit of apple juice is a good one to try,” Johns says. “Instead of handing a toddler a large sippy cup, give small volumes. About half a cup at a time, every 20 to 30 minutes will help the liquid stay down.”

It’s not likely that you and your toddler will go into isolation between October and March to avoid pneumonia—or, for that matter, the cold and flu. Still, there are a few preventive measures you can take:

• Vaccines. “Childhood vaccines are one of the biggest tools we have in reducing the incidence and severity of pneumonia,” Chester says. The pneumococcal conjugate vaccine [Prevnar], which is given during the first year of life, has significantly reduced hospitalization for pneumonia in children under 2 years of age. (Prevnar protects against 13 strains of pneumococcal bacteria.) Other routine vaccines, such as the annual flu shot and Hib vaccine, will also seriously minimize the likelihood of infection. Even if a vaccinated toddler gets the flu, it tends to be milder and therefore less likely to develop into pneumonia, Adalja says.

• Avoiding secondhand smoke. According to studies by the Centers for Disease Control and Prevention, children whose parents smoke are more likely to pick up respiratory diseases like bronchitis and pneumonia. The reason? These kids’ lungs are less developed.

• Good hygiene. The same tactics to avoid the typical winter scourges (cold, flu, strep) will also help reduce the risk of pneumonia in toddlers. Steer your child clear of playing with waiting room toys at the doctor’s office (bring your own); the same goes for pressing elevator buttons, difficult as that may be. Keep wipes and sanitizer on hand when you’re out and about, and use them, particularly before eating. Wash hands with warm water and soap (don’t forget to scrub the fingertips!) whenever you get home from an outing, not just after using the restroom and before eating; and remind your toddler to keep hands out of eyes, nose and mouth. Finally, establishing a “sick etiquette”—such as coughing into an elbow and wiping one’s nose with tissues, not fingers—helps to keep everyone healthy in the long run.