The Brothers and Sisters actress and The Nest cover girl shares with us how she overcame a rough start to breastfeeding and how she's still going strong. 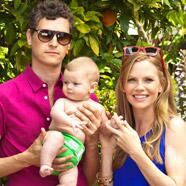 TB: From your experience in the beginning, what was the hardest part of breastfeeding?

SJM: I think it was getting my supply under control. I was a dairy queen and making a ton of milk. I got a couple of clogged ducts, which is really painful, but I was really determined to get through it because I felt like once we got the breastfeeding under control it was just going to be so easy. My baby got sprayed in the face a bunch of times cause I just had milk coming out of everywhere. I had a lactation consultant actually help me figure out when to feed him and read his cues because it turned out I was way over-feeding my baby, which was making me make more milk.

TB: But you did stick with it and you’re still breastfeeding. What made you keep going?

SJM: I love when I wake up in the middle of the night to fed the baby — that it literally takes me five minutes because I don’t have to fix a bottle. I don’t have to do anything. I just pick him up, stick him on, put him right back to bed. I love those moments in the middle of the night where I look down and just think, ‘Aww this is really sweet, and I’m not going to have this for much longer.’ So I really try to take those moments in.

TB: Being an actress and wife to a musician, you must travel a lot. Have you found any advantages to traveling while breastfeeding?

SJM: I love that I don’t have to take bottles with me anywhere. I can just stick him on me. And when you’re going through security at the airport, I don’t have to worry about liquids, cause the liquids are in me!

TB: Ha! Any funny stories you have from breastfeeding?

SJM: The spraying in the face is pretty hysterical. He just looks at me, and doesn’t care, doesn’t know what’s going on. I just had so much milk that I was constantly spraying him in the face. He would pull his head back and next thing you know it’s just milk going in every direction. It’s comes out of so many holes – I had no idea.

TB: What’s a good tip for expectant moms who might be nervous about breastfeeding?

SJM: I would say screw the birthing classes. Take a breastfeeding class because it really is something that you have to learn how to do. Some of the problems I had early on, like the plugged ducts, I think that I could have avoided if I had taken some classes beforehand. There’s kind of an art to breastfeeding.

TB: Okay, last thing — you look amazing! How much weight did you lose?

SJM: I think I gained 33 pounds when I was pregnant, and by the time my baby was two weeks old I had lost 22 pounds. And I know it’s from the breastfeeding. Cause I was making ice cream!