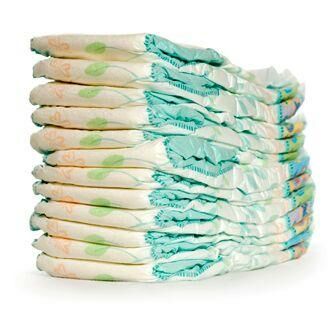 A new study published in the journal Pediatrics reveals that 4 out of 5 American adults struggle to afford a child’s most basic necessity:  diapers.

The New Haven-based study, titled “Diaper Need and Its Impact On Child Health” completed by a group of Yale researchers, is the first of its kind to perform a peer-reviewed analysis that measures the psychological impact on a mother not able to afford diapers. They found that 30 percent of mothers have struggled to pay for diapers and more than 8 percent of low-income mothers have had to reuse soiled diapers on their children. After interviewing 877 mothers, they also noted that the need for diapers dramatically affects a mother’s ability to parent, influencing her maternal stress, child health and child’s development.

In the study conclusion, researchers wrote, “Although a majority of studies have examined family socioeconomic status as income and educational and employment status, emerging research suggests that indicators of material hardship are increasingly important to child health. This study supports this premise with the suggestion that an adequate supply of diapers may prove a tangible way of reducing parenting stress, a critical factor influencing child health and development. There is potential for pediatric providers to inquire about diaper need and refer families to a local diaper distribution service as 1 method to reduce parenting stress.”

A startling statistic from the study sheds light on a nationwide affordability issue, for mom’s at any pay level: For a woman who’s working full-time at a minimum wage job, the cost of an adequate supply of diapers, which researchers estimate to be around $18 a week, or $936 per year per child, may eat up as much as 6 percent of her gross pay.

The author of the study, Megan Smith, a Yale psychiatrist, stressed the importance of examining the poverty that struggling mothers experience on a daily basis. She told HealthDaythat, “We talk, as researchers, about the link between mental health and poverty, but oftentimes don’t often operationalize what poverty looks like specific to mothers.” From the findings, Smith suggested that one means to a solution could come from other mothers. She said that pediatricians could start asking mothers and children about their diaper need and start recommending local diaper bank services.

There are already a plethora of organizations in place that assist mothers and children in need. If you’re interested in getting involved, making a contribution, or finding other ways to help, here are a few places to start looking:

Text4Baby : the free service sends a text message to provide information and answers questions from mom in poverty-affected neighborhoods, working as a resource and an outlet for struggling mothers.

The National Diaper Bank Network : a nonprofit organization that has donated more than 15 million diapers to free distributors across the nation. The network works to connect struggling families with local diaper banks. You can find places locally to donate diapers (along with contact info., address, web information and hours).

Baby Buggy : the organization noted that they’ve helped provided more than 6 million items (including diapers, bottles and other baby necessities) to struggling families.

The National Healthy Mothers, Healthy Babies Coalition : the organization works to educate new moms on heath and safety issues they might run into (or have questions about) regarding their babies.

Feeding America: the largest network of food banks (with locations in every state). The organizations generally have diapers on hand as well.

Single Parents Alliance of America: this organization works to bring resources (as well as discounts) to families that qualify as low-income single parent households.

Do you think that moms should be given a supply of diapers and other basic resources at birth in order to care for baby? Should baby necessities be more affordable?