Study Says Fertility Treatments Not to Blame for Baby’s Developmental Delays — So, What Is? 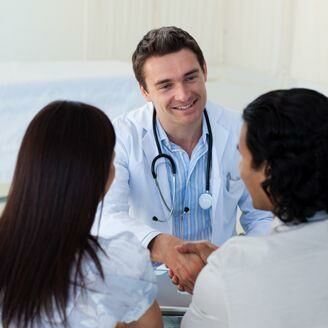 New research sheds light on why babies born from in vitro fertilization (IVF) treatments have shown a higher risk for developmental delays. In the past, low birth weight, issues with brain development and premature birth have all been correlated with fertility treatments. Researchers are now noticing that while it’s possible the treatments themselves are contributing to the alterations in development, it’s also time to factor in infertility as one of the precursors to these developmental issues.

The study, published online in the journal Archives of Disease in Childhood, involved 209 children born to parents who had struggled to conceive. Researchers reported that infertility may be largely responsible for the neurological differences found in children born from fertility treatments. But from the study, the data researchers collected supported previous data, which found that the techniques associated with IVF were not linked with an increased risk of neurological issues for children at age two.

In order to come to these conclusions, researchers focused on a group of couples enrolled in a study of assisted reproductive techniques. These couples were considered “subfertile”, or unable to conceive after 12 months. These parents took between 1 year, 6 months and 13 years to get pregnant, producing 209 children. After these 209 children reached age 2, each child was evaluated for mild neurological and developmental problems, which included movement issues, muscle tone, hand-eye coordination and posture.

They found that 17 of the 209 toddlers showed minor neurological problems, and these children were more likely to be born of parents who took the longest to conceive. Researchers found that taking a longer time to get pregnant was associated with a 30% greater risk of having a child with mild neurological issues, even though other factors like parents’ education and age are also known risks.

From the data collected, the results imply that the factors linked to poor fertility (which, for parents, contribute to taking a longer time to conceive), played a larger role in the child’s poor neurological and developmental than the fertility treatments would have. And while these minor delays have been noted, the authors of the study still stress the importance that none of the issues in the study are debilitating or life-threatening; simply minor abnormalities that don’t affect overall behavior or development in a child.

Sudy author Mijna Hadders-Algra said, “Suboptimal neurological condition does not imply overt problems in daily life. It does, however, indicate an increased vulnerability for developmental problems such as learning and behavior problems. This means that our findings do not have significance on the level of the individual child, but that they do have significance for the population at large.”

Hadders-Algra hopes that the results from these studies will help inform reproductive health policies around the world. She also hopes that as more studies similar to this are conducted, the better the research will be to inform doctors and policy makers so that guidelines can be created to better suit the benefits and risks of assisted reproductive techniques, such as IVF, for both parents and babies.

How do you feel about the latest research?