Is Low Testosterone the Secret to Being a Good Dad? 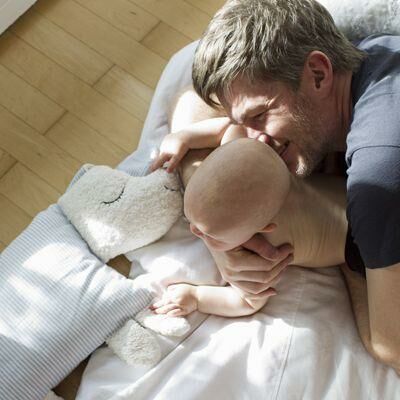 Are some men wired to be good dads?

A  new study from the University of Michigan looks into this question, analyzing how testosterone levels can affect a father’s empathy and parenting skills. The takeaway? Lower levels meant more nurturing, a definite parenting plus.

Most research about dads and babies involves their interactions during play. But that rarely triggers testosterone changes.

“A better trigger assessment is their own baby crying,” said study author Patty Kuo. “For parents, infant cries are strong stimuli and can often elicit multiple types of emotional responses, including empathy, annoyance or aggravation.”

Researchers rounded up 175 men whose partner was pregnant with their second child. The fathers and their children participated in videotaped activities during which dad was separated from baby for a short period and then reunited. Fathers were able to watch their infants during this time, many of which became visibly upset, searching for dad.

They found that the father’s reaction was linked to hormonal changes. Dads who interpret the crying as distress feel more empathy, experiencing a decline in testosterone. The response upon reuniting? More nurturing. But dads who interpret the crying as aggravating experience an increase in testosterone, and have a more negative response to their baby upon reuniting.

Measuring testosterone changes was easy enough; researchers just had to get a saliva sample. But measuring parental behavior required a follow up activity after baby and dad reunited. Fathers were asked to teach their babies how to do three different toy-related activities. They were given five minutes for each toy.

“We are not arguing that universal declines in testosterone will always be associated with ‘good fathering,’” said co-author Brenda Volling. “Perhaps increases in men’s testosterone may be necessary to protect the infant from harm in some situations. We are just beginning to understand the complex relations between men’s hormones and fathering.”