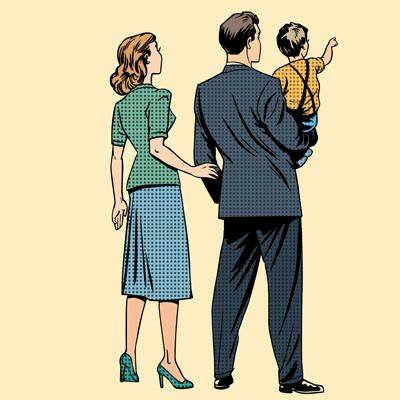 It’s been written off as the result of hormonal changes for years, but postpartum depression, and new-parent mental health in general, may have more to do with the way our culture shapes parenting.

As you’ve probably noticed, having a baby is a pretty life-altering thing. So it’s not surprising that new moms and new dads are especially at risk for conditions like anxiety, post-traumatic stress disorder, psychosis and bi-polar disorder during the perinatal period — the weeks before, during and after birth.

“Child birth itself is a life change and a life stressor, so actually there’s far more evidence that those risk factors are the cause [of depression], more so than hormones,” says Carrie Wendel-Hummell, a researcher at the University of Kansas. She interviewed 17 new fathers and 30 new mothers, all primarily from Missouri and Kansas, who experienced symptoms of at least one perinatal mental health condition. The biggest underlying cause found among the middle-class parents? Pressure for perfection.

“Middle-class mothers often try to do everything to balance work and home life, and fathers are increasingly attempting to do the same,” Wendel-Hummell says. “This pressure can exacerbate mental health conditions. If everything is not perfect, they feel like failures — and mothers tend to internalize that guilt.”

This isn’t anything you don’t already know. The parents interviewed expressed concern about expectations of parenting, relationship stress, family-work balance issues and struggles with poverty. But this recognition — the study will be presented at 109th Annual Meeting of the American Sociological Association — is another call for more parenting and mental health resources, and a reminder that it’s normal to not be able to juggle it all.

“We really only have a screening procedure for depression,” Wendel-Hummell says. “There should be improved screening, and it should be done in the later stages of women’s pregnancy and throughout that first year after the baby is born, for both mothers and fathers. We focus way too much on, ‘how do we fix this individual,’ but we really need to address the state of social and family policy.”

Federally-mandated paid maternity and paternity leave would be a great start.

How are you adjusting to life with baby?