The Worst Things to Say to Other Moms

Watch what you say, mom. These slips of the tongue could offend some other parents. 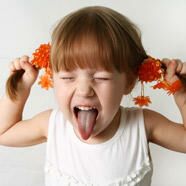 *“Aw, c’mon. It’s just a cookie!”
_“Some moms judge me for not allowing my child to eat junk food or chocolate.” — _dreamteam33
_ _Why you shouldn’t say it: Sure, to you it’s just a little cookie, but to some moms it could be something much bigger! Remember: you don’t know what’s going on with other kids’ food restrictions, allergies or special diets. Heck, maybe the kid just ate three cookies, and the mom doesn’t want him tempted into adding to the sugar rush. Either way, it’s up to the parent how to feed their kid, not you.

**“Put a coat on that kid!”
_“People always tell me to put warmer clothes on my daughter. But you know what? She starts running around the park and her little body gets heated up. She starts taking off her hat, gloves and coat, telling me she’s warm, and I don’t fight her on it. When she feels cold, she tells me. When she feels warm, she tells me.” — _i_luv_lucia
_ _Why you shouldn’t say it: Contrary to popular belief, cold weather doesn’t actually make you sick (catching a virus does). Sure, being in the cold might make symptoms worse, but it’s not up to you to decide how other kids’ parents should dress them.

**“I’d never pierce my baby’s ears”
_“My husband asked me in front of a bunch of family and friends if I would pierce our daughter’s ears. I said, ‘No way!’ My cousin was sitting with us, and she has a one-year-old with pierced ears. Her face turned red.” — _taylorsmom51
_ _Why you shouldn’t say it: Maybe to you baby’s ears should be left pristine and hole-free as long as possible. But remember that ear piercing is sometimes a cultural custom. And really, in the end, it won’t do any serious damage.

**“Isn’t he too old for a pacifier?”
_“I judge when I see three-year-old kids with a pacifier in public. I assume the parents are lazy, ignorant, let their kid get away with murder, let them watch TV all the time, let them drink soda every day…” — _cjj00
_ _Why you shouldn’t say it: Using a pacifier isn’t irresponsible, and there’s actually no set age for when children should be weaned off one. Some docs say babies should stop using the binky by age one, while others say they’ll naturally stop between two and four. Also, some moms just let their kids use it in situations where they feel nervous — like around strangers (like you!) — so that might be why this kid has one right now. Weaning your kids off anything is stressful enough. Would you really want someone breathing down your throat about when you should do it?

**“Can’t you get your kid to behave?”
_“We were at a restaurant once and my DS bumped into an elderly woman. The man with her said to me, ‘You really should control your kids.’”— _beachluvr
_ _Why you shouldn’t say it: Every mom has been there before, and if you haven’t yet, you will. Kids are unpredictable — yours, no matter how well-behaved — is bound to have a meltdown in public or annoy someone he shouldn’t. So be sure to cut the other moms some slack.

*names have been changed