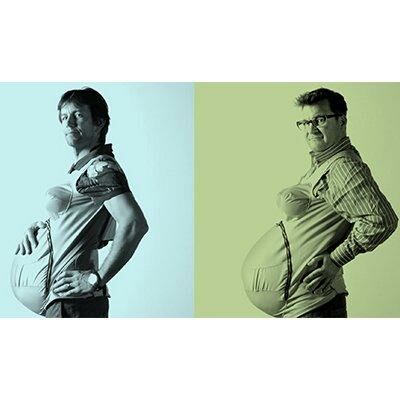 Is this the ultimate show of empathy? Three UK dads are taking on a month-long challenge, wearing 33-pound “empathy bellies” to honor their wives, mothers and pregnant women everywhere.

Yep, we know, one month isn’t exactly nine. But we’re still pretty impressed by the commitment of Jason Bramley, Steve Hanson and Jonny Biggins. Meet the  Three Pregnant Dads, who are documenting the entire experience on their website, complete with daily video and diary entries. The pregnancy suits, with boobs included, are designed to mirror the slouching, waddling, aches and abdominal distention associated with actual pregnancy. And with the exception of showering, these guys aren’t taking them off.

A sampling of their “pregnancy journeys” has been an eye-opener — for these men, and likely, other men.

“I woke up feeling moody and sullen this morning. I have been fighting a lingering cold recently and this morning it decided to beat me up. Just to add to that, I vandalized my family jewels as I mounted my bicycle. Not a great start to the day,” he writes.

“One of the guys in our office (Paul O’Neil) won’t shut up about some namby-pamby race where you swim for a while, ride a bike for a bit and run a little. ‘It’s the toughest challenge a man could do’ says Paul. ‘It pushed me to my absolute limit!’ exclaims Paul. Well, Mr. Iron Man Paul I’ve got a challenge for you. It’s called ‘The Iron Mum Triathlon’. Wearing a pregnancy suit, 1. Get the laundry out of the tumble dryer – 2. Iron the laundry – 3. Put the clothes on. Boom! no more macho chat from Paul in the office. Honestly, huge respect goes to all you pregnant mums out there. Every single one of you – one tough mother.”

Woah, he really gets it. And after less than a week into the challenge! The dads, who all work together in Barcelona for The Book Everyone (a company that creates personalized books for birthdays and family events), have endured their fair share of belly pats in the office. But overall, reactions are pretty mixed…

The challenge ends on March 6, which is Mother’s Day in England. What do you think: Is this a fitting tribute to pregnant women, or are these guys getting undue attention for something women go through every day?