The Bump caught up with the White Collar (and Beverly Hills, 90210 and Saved by the Bell, of course) actress about her favorite and not-so-favorite parenting stuff. 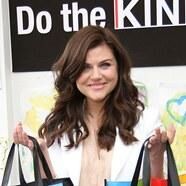 Your daughter, Harper, is turning two! Are you planning a birthday party?

Yes. Very soon. It’s crazy that she’s going to be two. I feel like I just had her yesterday. Yeah, we’re [planning a party]. “Bird” was one of her very first words. So I was thinking about doing a pretty bird theme. “Owl” was another word that she really liked. That’s what I’m thinking. We’ll see!

So let’s get honest. What are the best and worst things about having a toddler?

Well, the twos are definitely here. They hit her a little early. I think it’s funny. With the twos, you get such highs and lows, and the highs help you cancel out the lows. Because you know there’s definitely challenging times, the tempers. She’s trying to figure out her boundaries and things like that. Those can be very, very tough. But you definitely forget them after they start giggling. And they’re talking now, and you can converse with them, and they totally understand everything you’re saying now. They’re running around. She’s a full-on kid, and that’s super, super fun as well.

A lot of our readers are pregnant. Do you have any advice for getting through pregnancy?

You know, it’s funny, I had a really generally — and I know not everyone does — but I actually had a generally really nice pregnancy. The  first trimester was a little hard in the sense of just being tired and slow. I felt nauseous — never threw up, though. But in my second trimester, I felt like Wonder Woman. I felt amazing, and then [in] the third, I felt pretty good. And then I was two weeks late, so I was getting a little slow, and the swelling was getting pretty bad toward the end. But in general, I felt pretty good. I got pregnancy massages almost every week toward the end, and I’ll tell you something, that really made a big difference. It’s good for the body; it makes you happy; it’s kind of giving back to you a little bit. I continued working out too. I felt that that was really important not just for me, but for the baby as well. Doing the appropriate [exercises] for those certain months — that was really important. So I really was big on that too — and yoga. Yoga was definitely my savior, especially the last six months.

What about baby gear. Did you have favorites?

Gear items? Let’s see — I’m trying to remember. It’s true: You have baby brain when you have a baby and when you’re pregnant, and then you kind of continue having it no matter how old they are. I hear my mom’s voice like, “I still have it!”

One of my favorite things I used was the Baby Bjorn [carrier]. I used that constantly. And now I use the Boba, which I really, really like. I still use that. She’s a skinny kid, so I can still actually keep her in that, and she actually likes it. So those two things I loved.

I was really crazy about safety, so the car seat was definitely a very important gear item of ours. Britax was on the top of our list. Big fans of Britax.

Other gadgets and gear? Harper never took to a bottle, so I never had to worry about any of that. Fifteen months! Never a bottle or a pacifier. I have a ton of bottles but I didn’t get to use them.