Traveling With a Baby Can Be Fun — Trust Me! 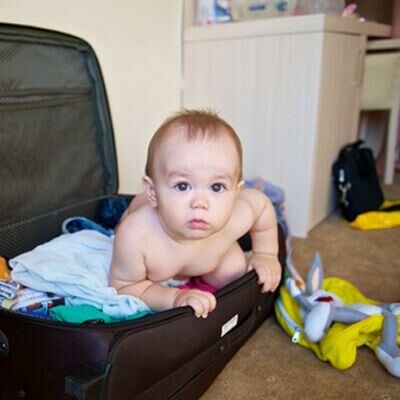 In the months leading up to our first flight with the babe, my husband let all sorts of awful scenarios fill his head: Evie screaming her head off the entire way from Chicago to Mexico; us making our way through security while drawing death-ray stares from the child-free fliers behind us.

“Mostly,” he says, “my fears revolved around us being ‘that couple.’ I mean, we had a two-week discussion about whether to drive to the airport or strap our daughter’s car seat into a cab.” Breaking character, I remained relatively unworried: I just thought, “We’ll do what we need to do to get through the flight: We can always strap a bag of puffs to her mouth and let her watch an in-flight The Office if she gets fussy.”

As it turns out, Evie, at the time 10.5 months old, was a dream passenger, and is now on her way to become a miniature frequent flier. We planned our flight to correspond with her morning nap, I nursed her while taking off to keep her ears pressurized and she fell asleep just as The Odd Life of Timothy Green started playing. A notoriously light nap sleeper, she even made it through the pilot’s extremely loud and incredibly close greeting, which bordered on filibuster in its length. Dan and I were oh-so-pleased with ourselves as we settled in for the movie… until I made the embarrassingly rookie mistake of cracking open my ice-cold Diet Sierra Mist and woke Evie up 45 minutes into the flight. We hadn’t even passed over Kentucky and I was already in the dog house with my husband.

Luckily, our baby rallied and was an utter delight, babbling and playing Peekaboo with fellow passengers as we paraded her up and down the aisle. (Her request for a Bloody Mary was denied; I gave her a Booby instead.)

I’d think most parents are freaked out about flying with their little ones, but the truth is, the entire process went incredibly smoothly. True, we had more baggage than the Kardashians, what with the Pack N Play, breast pump, Baby Bjorn, car seat, stroller, our clothes and toiletries, Eve’s outfits, 40 diapers, toys, blankets, pouches of food… you get the point. But we were also afforded plenty of perks, just by virtue of our pitiful appearances. To wit:

We got to slip the crazy 200-person line snaking its way towards security. An agent spotted our caravan of crap and waved us through some special bedraggled parent corridor and BOOM! we were unloading our stuff onto the conveyer belt.

I was allowed to bring my bottle of water through security under the guise of “food” for the bambino.

At the gate, I asked the ticket agent if there were any rows with three seats. There was, and just like that, Evie had her own $900 seat for free (we strapped the Chicco in).

We steered our Uppa Baby through the airport and checked it at the gate, which means it essentially functioned like a free luggage cart, carrying my purse, laptop, diaper bag, latte and more.

Once in Cancun, our skin was spared seven days of premature wrinkling because we stayed under giant umbrellas to protect Eve’s vulnerable baby skin.

When ordering food, you can ask the waiter to “bring some sliced avocado for the baby as soon as possible,” et voila: Instant appetizer to accompany your mojito.

You get to sleep in every day and read books while lounging by the pool. OK, actually, it’s the exact opposite. #newreality

How do you plan for travel with your little one?