If you follow the recommendations, baby will get five shots (and one liquid!) by the time he’s two months old. And it’s easy to wonder whether you’re doing the right thing. 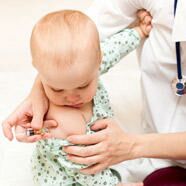 Imagine if there was something you could do so baby would never get a life-threatening infection or a virus that could paralyze him. It seems so obvious you’d do it, right? But the parents who don’t vaccinate and the parents who do worry about it on the same level. So what’s really at the heart of the debate? We know beyond certainty that “vaccinating protects babies from dire infections, stuff that causes horrible complications,” says Cheryl Wu, MD, a pediatrician in New York City. At the same time, information on the Internet and releases by anti-vaccine groups make them seem terribly unsafe and even medically unethical for doctors to administer.

The fear: Dangerous side effects
Why give baby something that can cause diarrhea, allergic reaction, rash or fever?

The potential side effects are less scary than your baby getting, say, diphtheria (as many as 1 in 5 kids who get it dies) or polio (it can cause lifelong paralysis). “Minor side effects are common — a sore arm, body aches, maybe a fever,” says Ari Brown, MD, a pediatrician in Austin, Texas, and author of Baby 411. “Those are a small price to pay for protection against a disease that is much, much worse to experience.”

“Significant adverse effects are rare,” Brown adds. “For instance, the risk of having an anaphylactic reaction is about 1 in a million. Could it happen? Yes. No medication is risk free. But, the risk is extremely low compared to the great benefit.”

Vaccines undergo rigorous testing before they come out on the market, and there are regular follow-up tests, says Michael T. Brady, MD, chair of the American Academy of Pediatrics’s (AAP) Committee on Infectious Diseases and associate medical director at Nationwide Children’s Hospital in Columbus, Ohio.

The fear: Autism
_There’s a connection between vaccines and autism, right? _

Nope. The AAP, CDC, World Health Organization and the Institute of Medicine are all clear on this. Vaccines do not cause autism.

Autism and vaccines were first linked in a study published in medical journal _The Lancet _in 1998, in which 12 children were reported as exhibiting autistic behaviors soon after receiving the measles, mumps and rubella (MMR) vaccine.

No one should have taken the study seriously in the first place, says Wu. “Twelve is not enough of a sample to definitively establish causation or association.” Even worse, in 2010, the study was found to have been fraudulent — the doctor who reported it intentionally altered the results — and _The Lancet _retracted it completely. “In the meantime, some 200 studies were conducted that have said that there is definitively no causation between MMR and autism,” Wu says.

“We need to focus our attention and the research dollars to more promising leads on the cause of autism — like early brain development in the womb and prenatal and perinatal risk factors that might be prevented,” Brown says. Other variables that could have an effect on autism risk could be mom and/or dad’s age at the time of conception, premature birth and even mom’s weight before pregnancy.

The fear: “The other stuff” in the shot
Can’t those preservatives harm my baby?

You may have heard of thimerosal, a mercury-containing preservative used only in the influenza vaccine in the US — it worries some parents. “We have good data that says thimerosal in vaccines doesn’t cause problems,” says Brady, who notes that thimerosal is used more widely in other vaccines in some other countries. Several studies, including one published in Pediatrics in 2010, have deemed it safe.

The fear: Overdosing shots
Should a two-month-old baby really be given six vaccines at one appointment?

“The worry is that you’ll overload a baby’s immune system and he won’t be able to handle it. But we know that’s not the case,” says Brady. “Vaccines provide only the minimum amount of material needed to create an immune response.” Because it seems like too much at once, some parents request a modified schedule, which means delaying shots, but that’s actually a gamble. “Being on the schedule means that the vaccine has been tested for this age,” Brady says. “We have evidence that this timing is safe and effective.”

With a modified schedule, baby goes longer without protection — not a good idea when there have been outbreaks of measles and whooping cough in the US in recent years. “If a two-month-old gets whooping cough, he can die,” says Brown. “There’s no benefit in waiting — only risk.”

*_The fear: Vaccines being useless
*_I doubt my baby will get polio — and measles is no big deal. What’s the point?

It could take something as simple as someone with one of these conditions hopping a flight to cause an outbreak here, as it did recently with travelers carrying measles to the US, says Brown.

And sure, your parents may have had measles as kids and got through it, but it can lead to pneumonia and cause brain damage, deafness and even death. It’s so contagious that baby would only need to be in the same room as someone with it to catch it. In areas with fewer vaccinated kids, infections spread more easily.

“I’ve been a pediatrician for 18 years, and I’m also a mom,” says Brown. “We all want to protect our kids. I vaccinated my children on the recommended schedule. I wouldn’t do anything differently for your kids.”

What Vaccinations Baby Will Need

How to Help Baby Through Vaccinations