Ways to Make a Baby From Low-Tech to High

From the spontaneous to the scientific, get the 411 on low- and high-tech ways to make a baby. 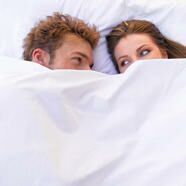 How do I get pregnant?

From the blissful simplicity of spontaneous, unprotected sex to the scientific complexity of in vitro fertilization… and everything in between.

Start by having unprotected sex

Ditch the contraceptives and relax. Most couples will have no trouble conceiving naturally. Set a time limit—usually a year (but ask your ob/gyn for specific recommendations) for “trying” before you consider consulting a fertility specialist. Women over 35 may want to see a fertility expert after six months.

If a few months of unprotected sex haven’t led to pregnancy, and you’re not ready to consult a specialist, try using an ovulation detector to time your intercourse for your most fertile times. These fertility monitors are available over-the-counter at most drugstores. The most common are ovulation test sticks, which work by detecting high levels of LH (luteinizing hormone, which triggers the release of the egg from the ovary) in urine.

Take the next step: see a doctor for testing

If your deadline passes and you’re still not pregnant, schedule fertility testing for you and your partner. Contrary to popular belief, male infertility is just as common as female. Depending on the results of your tests, the next step in your quest for conception may be specific treatment for a detected problem.

Clomiphene citrate is a relatively inexpensive drug that can be used in patients who have unpredictable cycles, as well as in women with polycystic ovary syndrome (PCOS) who don’t ovulate at all. Clomiphene can also be effective in women with luteal phase defect, in which the low levels of progesterone are produced by the follicle after ovulation—leading to miscarriage. The medication is often used with IUI—intrauterine insemination with sperm that has been “washed” in the lab to increase its fertilizing potential.

There are several potent injectable hormonal drugs that cause superovulation—the stimulation of several follicles in the ovary during the same cycle. They are used in preparation for IVF (in vitro fertilization, see below), but they can also be effective for women who don’t ovulate and for those with unexplained infertility. These medications include genetically engineered versions of LH and FSH (follicle stimulating hormone).

If scar tissue is blocking the fallopian tubes, surgeons can remove the excess tissue to open up the passage. But when there is severe scarring from surgery or past infection, IVF (see below) may be the best option.

Microsurgery can remove blockages of the epididymis (the long tube connecting the testicles and sperm duct).

**If you’ve made it to this point and still aren’t pregnant, it may be time to harness the vast powers of high-tech medicine to help you.

IVF is the treatment of choice—and the final fertility treatment option—for a variety of patients, including women with total fallopian tube blockage. In IVF, the follicles are stimulated with superovulation drugs, but the eggs are retrieved from the ovaries before ovulation so they can be joined with sperm in a lab dish. The resulting embryo or embryos are implanted in the uterus.

_ *The high-tech options listed below are adjuncts to IVF. _

ICSI can help men with extremely low or even zero sperm count to become fathers. In this technique, doctors retrieve a single sperm from testicular or epididymal tissue and then microsurgically inject it into the egg in an IVF procedure.

In this still-new technique for women with polycystic ovaries—who produce multiple immature eggs in a single cycle—the immature eggs contained in the ovaries are removed and “ripened” in the lab before being fertilized.

PGD allows embryos to be tested for genetic problems before they are implanted in IVF. PGD is often recommended for couples who know they carry the gene for a specific disorder (such as cystic fibrosis or sickle cell disease), so that only embryos that don’t carry the gene will be implanted. PGD may also help prevent miscarriage in women who have suffered recurrent pregnant loss due to genetic problems.