Wondering what kind of economy your baby will grow up in? What kind of technology she’ll use? What her future career will be? We’ve got predictions on what babies born now will experience throughout their lives.
Save article
ByElena Donovan Mauer
UpdatedJan 2017 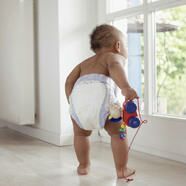 *They’ll know a better economy
* Sigh of relief, mama: The economy is expected to improve — and soon. In fact, some experts predict that by 2020, real income will increase by about 10 percent, unemployment will drop to 6 percent, housing prices will rise, and interest rates will stay low, compared with 2011. So baby is more likely to have some luxuries while growing up.

*They’ll have friends named Sophia, Jacob, Isabella and Jayden
* These names hit the most popular baby names lists in both 2010 and 2011, and we don’t expect them to wane too much in the next few years. If your baby has one of these monikers, be warned that they may have to use their last initial in class to avoid confusion with another Sophia, Jacob, Isabella or Jayden.

*They’ll think of cell phones the way we think of dial-up
* Sure, when baby’s older, he’ll have something like a cell phone, but some predictions of what future phones will look like are dramatically different from the handheld devices we use today. We’ve heard of ideas from wearable eyeglasses to wristbands and even a microchip installed in your brain (crazy, we know!). A phone you hold in your hand might be something baby just reminisces about from his childhood.

*They may drive a flying car (well, maybe)
* Once baby gets her driver’s license, she may not have to sit in traffic. At least two models of “flying cars” do already exist (think: mini airplanes or helicopters), but before they become commonplace, some improvements need to be made and the price tag needs to come down (one of them costs $279,000!). So baby driving a flying car isn’t exactly a guarantee, but it’s definitely a possibility.

*For their college education you’ll pay (brace yourself)…
* …Over $100,000 for a four-year private school for the 2029-2030 school year, according to several sources. Start saving now, mama!

*Their future job may be one you’ve never heard of
* One UK study predicts that some of the most popular new careers in 2030 will be:
Body-part maker — Advances in bio-tissues, robotics and plastics may mean creating high-tech new prosthetics, which may have such high demand that there will be body-part stores, says the study.
Memory augmentation surgeon — Surgeons may, in the near future, be able to add memory capacity to people’s brains (wow!).
Vertical farmer — Urban farms are expected to grow in popularity — and height! A vertical farmer specializes in hydroponically fed foods, grown under artificial lighting in multistory buildings.

*They won’t worry so much about when to have children
* As fertility specialists improve embryo- and egg-freezing technologies, increase the success rates of fertility procedures and experiment with the ability to generate new eggs and sperm from other cells of the body — you never know — our kids may see the end of infertility as we know it, putting less pressure on them to have their own babies by a certain age.

*Their life expectancy may be 100!
* Some experts believe that, with current medical advances and future breakthroughs, life expectancies will continue to increase. And baby just might live to be a centenarian!

Babies by the Numbers