When Your Family Is Your Day Care 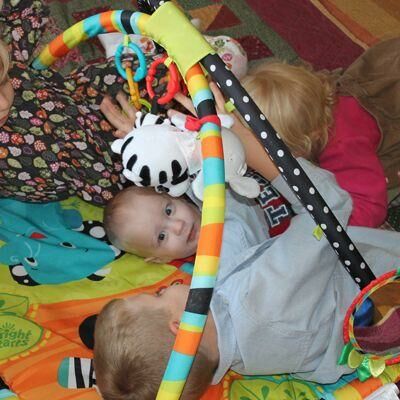 Every family has to tackle the “Who will take care of baby” question. In the case of a stay-at-home parent, it’s the parent. In the case of two working parents, it gets more complicated as there are lots of options:

Each situation has advantages. When parents work different schedules, there isn’t a day care cost. With a day care center, you’ll know that you’ll always have coverage even if one of the workers is sick. With an in-home provider, you have a more home-like setting and possibly a longer relationship with the caregiver. Hiring a nanny lets your kids stay in their home. Using family members doesn’t expose your child to as many illnesses and can enrich your child’s relationship with family.

Each situation also has disadvantages. Parents working opposite shifts don’t get as much couple or family time. Day care centers often influence how a child develops (with rules about feeding and diapering and toilet training). In-home day cares and nannies present problems when the caregivers are sick or take vacation. Using family can get tricky when day care isn’t going well.

For us, my sister is my child’s babysitter while I work. And I love it! It’s working out beautifully. But I also know that not everyone would want that situation for themselves, and I also know that using family doesn’t work out as well for other people. But for us, for this time, it’s lovely!

Why does it work so well for us? I think there are a few reasons.

1) Similar parenting philosophies My sister and I had the same thoughts about how to set up a routine for infants. We both follow an Eat/Awake/Sleep routine, so when I drop him off in the morning, her first question is “When did he wake up?” That tells her when he last ate and about when he’ll probably want to nap again. If she was more of a “I don’t want a routine!” mom and I was  “I want my baby on a routine” mom_,_ lots of conflicts would ensue.

2) She’s been there, done that. Recently. She has three children of her own — a six-year-old, a three-year-old and a one-year-old. So when she gives advice, it’s easier to take than from someone who has never had children or who had children a long time ago. It’s fresh in her mind what baby milestones are next, what to pay attention to and what not to worry about. It’s also easier to take advice from her rather than other family members who don’t spend over four hours a day with my son.

3) She’s gracious While we agree on the big stuff, we don’t agree on absolutely everything. As an example: I’m vaccinating on the American Academy of Pediatrics schedule, while she did an alternate, delayed schedule. She recognizes that it’s my child and my right to make different decisions and that my decision isn’t a reflection on her. She doesn’t make an issue out of it.

4) I pay fairly. And on time. My sister isn’t doing this for free. She’s said that she’s willing to, but I wouldn’t feel right about that. She’s enabling me to work and if I wasn’t paying her, I’d be paying someone else. So, before I even pitched the idea to her, I found out what the going rate was in our city for day care centers and in-home day cares, and offered her that. She agreed — she wasn’t doing it for the income. If she wasn’t babysitting for me, it isn’t like she’d be seeking out other income streams. She’s committed to being a stay-at-home mom at this time in her life. Why not make a little extra income taking care of your nephew? In fact, I think (but I’m not sure) they are using the money to have their mortgage paid off in the next five years. It’s great to be a blessing to them while they are one to me.

To avoid the awkward “Where’s my check?” conversation each month, I set up an auto pay from our checking account. At end of each month, my bank automatically transfers the amount into her checking account. I can’t pay late! (Unless I went in there and canceled the payment or something.) This prevents hard feelings and confusion.

6) I’m considerate to her. As a mom knowing that someone else is watching my child, I know that I have to give, too. While I am paying her, she is my sister and I know she wasn’t looking for a “job.” So I try to do the things that make it easier for her. Since she has a one-year-old, we bought her a double stroller to enable her to go places easier — like the park or the shopping mall playground. It helps her be more mobile, and it isn’t a purchase she would’ve made if she wasn’t watching my son.

Additionally, one day a week, her son gets out of Kindergarten early, so I’ve structured my work schedule so that I get off in time to go pick him up. It saves her from packing up all the kids, and interrupting their naps to pick him up. Instead, Aunt Jayme just swings by the elementary school and brings him home. A few times, I’ve stayed at her house, watching her children after work while she’s run errands or volunteered in her son’s kindergarten class.

Things will probably get more tricky when Finn gets older. At some point, real discipline will need to start._ “No hitting!”_ and_ “You need to sit in time out until you can play nicely,”_ and “We don’t use language like that.” Just like parents whose children are in school, I’ll have to support her as the adult. When she’s there and I’m not, she’s the authority. I think we have similar philosophies on that, but you just don’t know until you get there.

In order for any mom/daycare relationship to work, there has to be give-and-take on both parts. It takes both people to make the relationship a happy one. Family members are no exception — things can get tricky, for sure. You still want Thanksgiving dinner to be peaceful!

There may come a time where I’ll have to let her be Aunt and not be day care. But for now this is a dream situation for me!

What type of child care did you choose? Why do you think it was the right choice for your family?