We’ve all heard the perils of plopping young kids in front of the TV—but maybe we moms need to give ourselves a teeny tiny break. 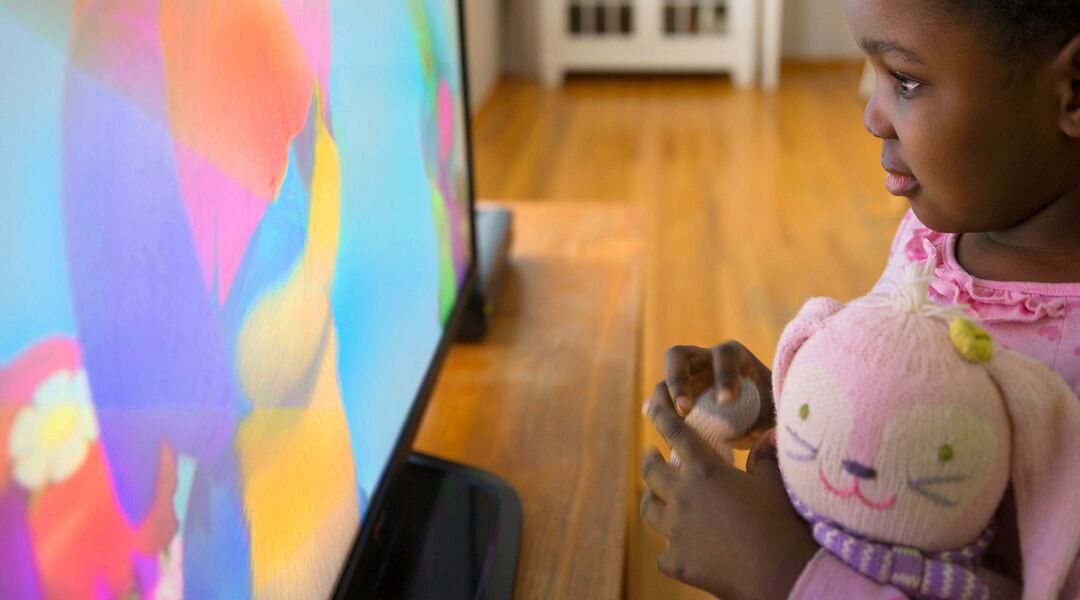 It was 2013, and I watched, horrified, as a mother of two attempted to situate her kids at a table inside a popular Los Angeles eatery. Disheveled and a bit frantic, she bulldozed into the place pushing an enormous tandem stroller and wrestled her twin toddlers into side-by-side high chairs, each one taking his turn to whine as the other received his mother’s attention. Once both children were secure in their seats, the mother collapsed into her seat, produced a foam-covered iPad from her diaper bag and plopped it in front of her kids, and took an enormous breath.

After surveying this scene, I turned my attention back to my lunch date, rolled my eyes and said, “I’ll never be the type of mom who just parks my kids in front of the TV. If we go to a restaurant, they’ll know to behave. It’s called parenting.”

Oh yes, I was that girl—the girl most moms would like to slap in the face. And looking back, I absolutely understand why. I sat there—childless, showered, polished and picking at a salmon salad—oblivious to what this woman’s day had been like and what it took to get herself to that restaurant. What right did I have to consider her a “lesser” parent because she let her kids watch television during lunch? The fact is, I didn’t. I didn’t know anything about anything when it came to being a mother, and even that is an understatement.

Much like breastfeeding, vaccines and Coconut La Croix, television is the subject of rigorous debate in our modern mama culture. My parents grew up without a TV, so when I was born, they figured it was just one of the many modern perks of having kids in the 80’s (along with the original troll dolls, Fraggle Rock and Cabbage Patch Kids). Television wasn’t considered this monster (but that’s also largely due to the limited options we had. How harmful could those family shows on Nick at Nite really be?).

In the early 2000’s, Baby Einstein mania was rampant, with families shelling out hundreds of dollars for the DVDs that were guaranteed to make your toddler a genius, leaving in its wake a sub-generation of now tweens and teens with faint memories of floating shapes, classical music and voiceless kangaroo puppets that border on PTSD. (I myself am routinely haunted by the purple neon elephants from Disney’s Fantasmic! show, and I have to imagine it’s a somewhat similar experience.) But by 2009, Baby Einstein had been blacklisted by the parenting community for fooling these women into believing what every mother desperately wants to believe: that videos are good for your child. Disney, its parent company, even went so far as to offer outraged parents a return on their investment.

By 2010, TV was widely regarded as detrimental to children’s overall health, not to mention their future academic performance and development of necessary social skills (so basically the things that keep most parents up in the middle of the night). When 2013 rolled around, I was clearly an expert on the subject, even though I had no child of my own yet and my wealth of knowledge came from Today show snippets. And like most things pertaining to parenthood, once television was anointed the devil, people everywhere felt they had carte blanche to criticize parents who were still allowing their child to enjoy some screen time.

First and foremost, let me say this: Whatever decision you make for your family is 100 percent your business. I think everybody agrees that too much screen time is unhealthy for our kids, but that has more to do with what the television is distracting our kids from, and less about some silly cartoon. Kids need to read books, play pretend and swing from trees. They need their parents to ask about their day and tell them bedtime stories. They need to develop meaningful relationships with the people in their lives, not a dependency on an iPad or TV screen.

That being said, sometimes mama just needs a damn break, and an episode of Paw Patrol or Daniel Tiger’s Neighborhood is just what the doctor ordered. After a long day, I might just want to cook dinner and watch the news in peace, and if that means my 3-year-old daughter is going to sit her little butt in front of the iPad for 27 minutes, that’s okay. She’s not going to come home from high school with a D in geometry because she watched the episode where the pups save a baby octopus. (If anything, my own ineptitude with math would likely be to blame.)

There’s no one way to raise children, and judging other parents says less about them and more about us. We all want to believe that we’re making the best possible choices for our families, and occasionally we prop ourselves up by putting other parents down. We want to affirm our own beliefs and decisions when it comes to raising kids, and unfortunately that can be at the expense of others.

To that woman at the restaurant in 2013, I have this to say: I am so, so sorry for being such an enormous a-hole. You didn’t deserve my judgment; you deserved a damn parade for getting a set of toddler twins into a restaurant. I get it now. Because when it comes to screen time for my kid, the bottom line is this: If I’m going to dinner with my husband and my toddler, the first thing I’m going to do is a pull out her iPad and drop that purple-covered bad boy in front of her. I’m going to order a glass of wine, I’m going to talk to my husband about my day and I’m not going to feel guilty about it.

Leslie Bruce is a #1 New York Times bestselling author and an award-winning entertainment journalist. She launched her parenting platform Unpacified as a place for like-minded women to come together on relatable ground, no matter how shaky, to discuss motherhood through an unfiltered, judgment-free lens of honesty and humor. Her motto is: ‘Being a mom is everything, but it’s not all there is.’ Leslie lives in Los Angeles with her husband, Yashaar, and their 3-year-old daughter, Tallulah.