From rocking yoga pants all day and being there to witness baby’s firsts, to interrupted conference calls and late nights, here’s what it’s really like to build a career from home. 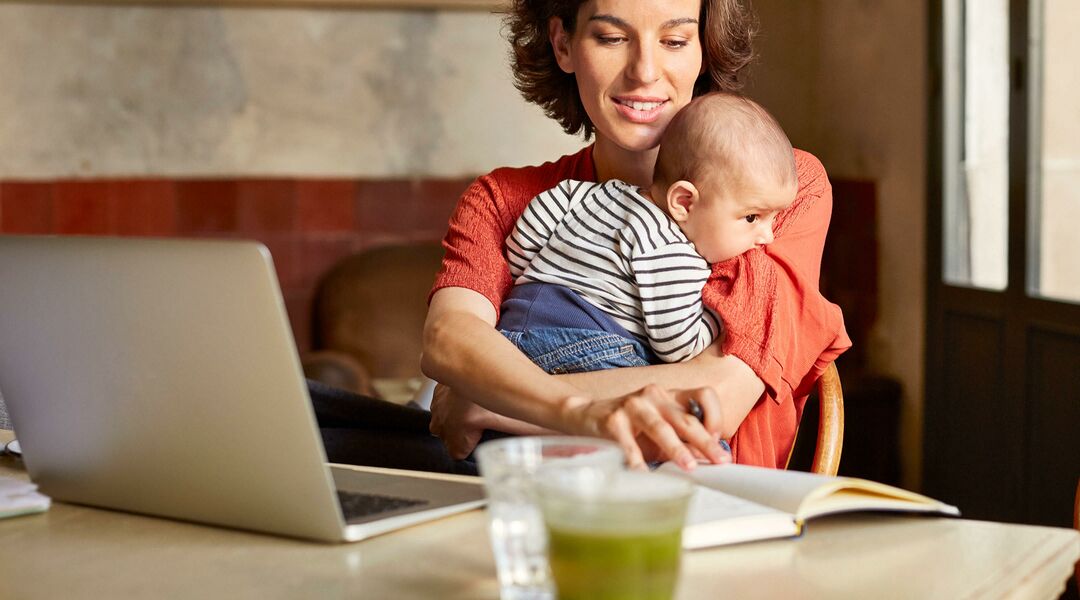 I’d be lying if I said being a work-from-home mom seemed like a dream job when I was younger. For a long time, I was so career-consumed and self-absorbed that I envisioned skipping over parenthood and embracing aunthood for eternity. I loved kids—I babysat, substitute taught and obsessed over photos of my nephews—but I wanted to travel the world, climb the corporate ladder and spend my free time at the spa. And so the thought of becoming a mother sat on the back burner.

But as the years passed, the shiny perks lost a bit of their luster, and I could no longer quell the pang of parenthood. I knew I was meant to be a mother, and if I didn’t make a move, I’d spend my life mourning the mistake of not having kids. Still, I thought I’d pop out a baby and go back to the workforce full time. After all, I’d fought so hard to get where I was and loved my profession (and my paycheck) that I couldn’t imagine not continuing after kids.

When I got pregnant with my daughter Lilly five years ago, I was determined to override the morning sickness and prove those colleagues who assumed I’d take it easy wrong. I arrived early and stayed far later than most, all the while hugging the porcelain throne. In my second trimester, I felt invincible—I stayed at the office even later and went out for mocktail margaritas with the rest of the crew, who slammed shots. But by my third trimester, I was done. I was tired, bloated and swollen, and work-from-home motherhood was looking really good.

I wound up leaving my full-time gig for a freelance role after my husband accepted a new position that moved our family from California to New York. But in the end, it left me feeling unfulfilled: There was no creative component, collaboration, office camaraderie or conversation. I was alone, at home, with an infant and a drastically different life. So I started my own outlet, a blog that began on a whim and, ultimately, ended up providing me with joy, purpose and an eventual paycheck. It also allowed me the opportunity to stay at home—something I had never imagined I’d want, but as soon as Lilly arrived, I couldn’t fathom leaving her. I didn’t want to miss out on all the firsts, and my new occupation ensured that I didn’t have to. I was able to attend classes, make new mom and baby friends and be there for her first crawl, her first steps and her first word (which was Dada—insert eye roll here). But that’s not to say that working from home has always been easy—or enjoyable.

First, let me say that I believe all moms are working moms, whether they’re working in the home, out of the home or a little bit of both, as is my current situation. I’m fortunate to be able to stay at home and work. But I’d be lying if I said there weren’t times I questioned what I was doing, why I was doing it and if it was really for me. Half a decade and another child later, I still do. This is the hardest gig I’ve ever had—and that’s saying something, because I’ve had some tortuous jobs!

Over the years I’ve resented my husband and friends who “get” to leave, who have a reason to shower, get dressed, leave the apartment and have a commute where they can read, email, text, sleep, stare off into space and sit without someone tugging at or spitting up on them. There were times when the thought of a childless coffee run or business lunch actually brought me to jealous tears. (And then when I did finally leave the house, because my mom was there or I had hired help, I felt guilty. What’s with that?) Meanwhile, I often found myself apologizing to associates for interrupted calls as I disciplined or catered to my kid, and emails took me hours, sometimes days, to answer. Then again, I could wear my yoga or PJ pants all day, snuggle up and watch a cartoon and nap when my daughter napped (at least in theory)—luxuries my husband and corporate friends didn’t get to indulge in.

But unlike my other stay-at-home mom friends, once I came back from taking my child on long walks and library outings, I had work to do beyond the standard household duties, which meant I stayed up extra late to get it all done. There were many business meetups I had to miss altogether. Sure, I was wearing workout gear around the clock, but I still had responsibilities and deadlines—something no one really seemed to understand. Because I didn’t look like the stereotypical “working” mother and didn’t have the same schedule, hours or income (let alone vacation, sick days or the possibility of a raise!), I often wasn’t taken seriously. Make no mistake, I was signing contracts and taking conference calls, but as they say about the tree in the forest, when it’s done in the privacy of your home and no one is there to see it, does it even happen? I’m telling you that it does, even while dealing with a dozen interruptions and issuing a time-out or two.

My job has been called cute, put in air quotes and been the butt of many jokes. I doubt most other writers, event planners, photographers and social media, marketing or branding strategists (all hats I wear) who have an actual office or brick-and-mortar business have experienced the same. Why is our job viewed as a hobby or passion project if we work from home? What is it about the confines of the house that constitutes less respect?

Whatever it is, I can assure you that no work-from-home mom (or for that matter, dad) is sitting on the couch catching up on soaps. With all due respect to Days of Our Lives, just because I choose to be the primary caretaker for my children doesn’t mean I have no desire to fulfill other aspects of my life. I’m still as hungry as ever when it comes to my career—I’ve just chosen a new venue. Remember, people: Mothers come in all shapes, sizes, colors and careers.

Natalie Thomas is a lifestyle blogger at Nat’s Next Adventure, an Emmy-nominated TV producer, contributor to Huffington Post, Today Show, CafeMom, heymama and Womanista, and former editor and spokesperson of Us Weekly. She’s addicted to Instagram and seltzer water, lives in New York with her tolerant husband, Zach, 4-(going on 14!)-year-old daughter Lilly and newborn son, Oliver. She’s always in search of her sanity and, more importantly, the next adventure.