Spray bottles to the face? Taped ears? Get ready for our second roundup of the wackiest parenting advice out there... 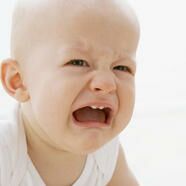 Last year, we asked mamas to spill the worst parenting advice they’d received from well-meaning friends and fam — and boy did we hear some things that made us cringe. So naturally, we’re back at it again. Read on as we weigh in on eight of the most WTF-worthy tips Bumpies have heard.

1. Whiskey on the gums
“I was told to put whiskey on baby’s gums to take away the teething pain.” —april4bride

Our take: The old whiskey on the gums trick, eh? This one’s been passed down from generation to generation, and for some unknown reason is still doled out by well-meaning grandmas at holiday parties everywhere. But thankfully, somewhere around the late '70s most of us wised up and came to one conclusion: Anbesol pretty much trumps a bottle of Jameson any day. Besides, you don’t want to be responsible for starting your kid’s whiskey habit before he’s even out of diapers, do you?

2. Get rid of the dogs
“My parents keep hinting that we should get rid of our dogs. My sister even said we’re putting my son in danger because we decided to keep our two Labs.” —EGrigsby

Our take: This one really offends the animal-lover in us. Not only have babies and dogs (and babies and cats) been getting along famously for centuries now, but we’re pretty sure if dogs weren’t allowed in houses with babies, next to no one would have a dog these days. Dogs will start to sense something’s up during your pregnancy, as your belly continually grows and your mood changes (hey, they weren’t born yesterday), so by the time baby actually arrives, chances are they’ll be semi-prepared. And while your long-haired Daschund could hit baby with sneezes and wheezes, try washing Fido with dander-reducing shampoo before sending him packing. It might help enough to alleviate baby’s allergies.

3. Don’t leave the house
“My friend’s pediatrician told her not to take the baby out of the house for the first two months.” —starry14

Our take: Sounds like it’s time for somebody to switch pediatricians. For the record, baby isn’t a dog. She’s allowed to be around other people before she has all of her shots. (Though, yes, if it’s cold and flu season, you may want to watch who baby gets near.) Sure, leaving the house with a newborn can be a bit of a massive production, but it’s not physically impossible. Don’t be afraid to pack up the little guy and run some errands or head to that doctor’s appointment. The truth is, yes, he’s delicate during those first few months, but not as delicate as you’re probably treating him. (You’ll get the full meaning of this once baby #2 arrives and all your previous paranoia flies right out the window.)

Our take: Hmm if by “crazy” you mean it will automatically send baby into an uncontrollable giggle fit then, yes, feet tickling will make your baby crazy. But hovering over the little guy, babbling nonsense words, and tickling his feet will not drive him clinically insane. Unless you hate laughter, adorable babies, and all things fun, baby giggle fits are pretty much the most enjoyable and infectious thing to witness. Ever. So who in their right mind would want to put an end to that? Needless to say, this little pearl of wisdom can be disregarded. So moms and dads everywhere: Carry on with the feet tickling.

5. Ward off tantrums with spray bottles
“Someone told me to spray water in the baby’s face every time he throws a tantrum…” —holterbreanne

Our take: Again, your baby is not a dog. Looks like somewhere between learning how to discipline their kid and learning how to train their dog, somebody got their wires crossed! (For the record, we think it’s pretty mean to spray a dog in the face, too.) All a spray bottle to the face will do is probably give your kid a complex. And a fear of water bottles for life. Oh, and make you look pretty crazy when you whip one out in the middle of the grocery store and douse your kid’s face with water. Yep, we think a good old-fashioned “time out” is a much better option in this scenario.

6. Give baby sugar to end fussiness
“My grandma told me I could get rid of my little one’s fussiness by making her a ‘sugar tit’ — you put a sugar cube in a dish rag, run it under water, and let the baby suck on it.” —meangene

Our take: Whoa, Grams! First of all, we can’t believe your grandma dropped the T-bomb. Second of all, giving pure sugar and/or sugar water to a baby (particularly one that’s still on breast milk or formula) is never a good idea. Docs may tell you a spoonful of sugar water before a vaccination will help calm baby — and this is definitely true — but this is only okay if it’s a one-time deal. Giving sugar to baby on a regular basis? Definitely a no-no. Too much water will mess with baby’s ability to absorb nutrients and the sugar just isn’t good for her at this age. If baby’s fussy, try to find out why first, instead of shoving a sugar-soaked rag in his mouth. (Is he hungry? Does he need to be changed? Is it time for a nap?)

Our take: We don’t even know where to begin with this one. It sounds like it may have started as a joke but somehow went terribly awry. Day and night confusion — when baby sleeps during the day and is up making a racket _all night long _— can be rough on any parent. But there definitely are ways to go about solving baby’s sleep problems that are a little more…shall we say, reality based. Here’s a tip: Start making daytime a little more fun for baby. Getting more sunlight, going on walks, or even just heading out to Grandma’s house for the day will make baby realize that daytime is not sleep time. Plus, it will keep her more alert and awake. Then once nighttime rolls around, she’ll be too pooped to stay up anyway. You can add to this by making nighttime a little boring, taking the toys away, and immersing baby’s room in darkness. And — _voila _— problem solved. Without any unnecessary baby-flipping.

Our take: Yikes! Our first question: Who are you living next to, Al Bundy? Our second question: If this were sound advice (and actually worked), wouldn’t we be seeing babies with taped-back ears all over the place? We seriously hope this neighbor was kidding…but sadly, it sounds like that wasn’t the case. Anyway, even if baby’s ears are a little Dumbo-like, he’s a baby! It’s adorable! And he’s got a lot of years ahead to grow into them. Plus, we’re pretty sure taping your kid’s ears to his head can be classified as some form of mild child abuse…so take that, Al Bundy.