The American Academy of Pediatrics recommends all kids receive the flu shot as soon as it is available this season.
ByStephanie Grassullo
Associate Editor
PublishedSep 2018 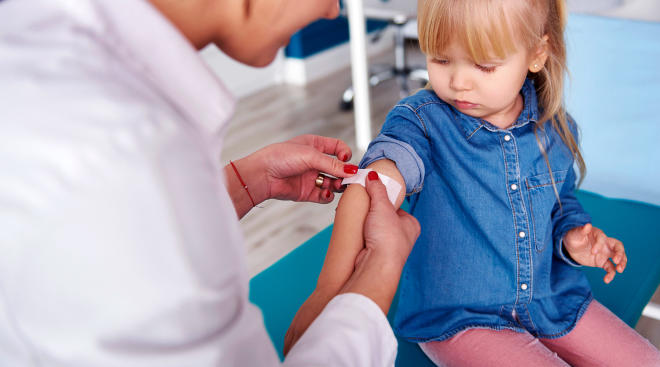 All children ages six months and older should receive the flu shot as soon as it becomes available this year, the American Academy of Pediatrics (AAP) says.

The AAP’s recently released 2018-209 flu vaccine recommendations remind parents of the importance for kids to receive the flu shot for “optimal protection” against the flu.

This season, the AAP suggests pediatricians offer the injectable form of the vaccine to all children six months and older as soon as it becomes available, and ideally by the end of October. The injectable vaccine is the primary choice because it has provided the most consistent protection against all strains of the flu virus in recent years.

Since the nasal spray didn’t work as well against the flu in the past, it hasn’t been recommended in the U.S. for the past two flu seasons. Vaccine effectiveness can vary from one flu season to the next, and the effectiveness of the latest nasal spray vaccine for this upcoming season is more of an unknown.

“Staying healthy is the goal for all of us. As a pediatrician and mom, I see too often how quickly the flu spreads," says Wendy Sue Swanson, an AAP spokesperson. “Unfortunately, you can spread influenza without realizing it because some infected people begin to spread the virus a day or two before they have symptoms. Get the shot. It just makes sense.”

Last year we were hit with one of the most severe flu seasons on record, excluding pandemics. As of August 18, 2018, there were 179 pediatric deaths associated with the flu, and 80 percent of the children who died had not received the flu shot, according to the U.S. Centers for Disease Control and Prevention (CDC).

In addition to kids six months and older, the AAP also says pregnant women may receive injected influenza vaccine at any time during pregnancy, and health care workers should receive an annual seasonal flu vaccine.

“The effectiveness of the flu vaccine varies and is affected by factors such as, the child’s age, health status, vaccination history and the strain of influenza circulating in a community,” says Henry Bernstein, a member of the CDC Advisory Committee on Immunization Practices. “We urge parents to talk with their pediatricians now to avoid any delay in getting their children vaccinated.”