“The first of many free preschools that we’ll be opening for underserved children.”
ByNehal Aggarwal
Associate Editor
PublishedSep 2020 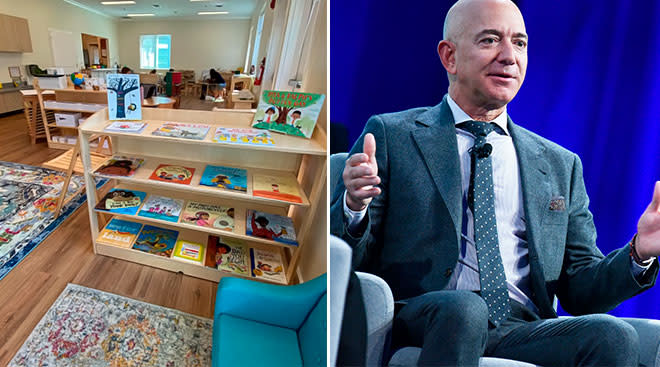 Amazon CEO Jeff Bezos is about to open the Bezos Academy, his first preschool.

Bezos announced the opening on his Instagram account earlier this week, sharing a picture of a classroom and revealed in the caption the school is located in Des Moines, Washington and set to open October 19.

“This classroom is just the beginning,” he wrote in the caption. “This one in Des Moines, WA, is the first of many free preschools that we’ll be opening for underserved children. Extra kudos to the team for figuring out how to make this happen even amidst COVID.”

The preschool will be “Montessori-inspired" and serve kids aged 3 to 5. It will offer full days, all year and will not charge tuition.

The Bezos Academy Instagram account, which has been active since August, revealed that the team has been working on the initiative since early last year. The account also features posts showing Bezos visiting Montessori schools across the country, including ones in Nashville and Washington D.C.

Bezos first announced he wanted to get into education in 2018 with the launch of two philanthropic initiatives, the Day 1 Families Fund and the Day 1 Academies Fund, both of which are funded by the Bezos Day One Fund, to which he’s committed $2 billion, Business Insider reports.

According to the fund’s website, the mission is to “launch and operate a network of high-quality, full-scholarship Montessori-inspired preschools in underserved communities” and have “the child be the customer.”

To learn more about the Bezos Academy, visit BezosDayOneFund.com.