Student Stumped by Lack of Scholarly Proof for Anti-Vaxxing 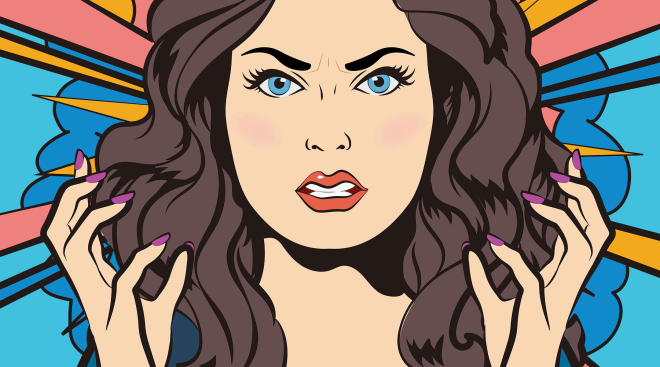 If you’re wondering where anti-vaxxers get their facts and figures about the dangers of vaccines, look no further. We have an inside look at the scholarly pursuit behind the movement against vaccines. 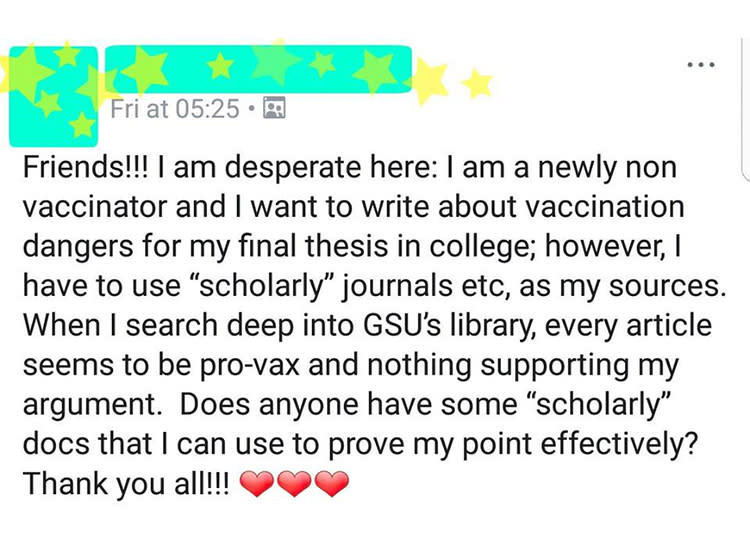 In an attempt to write a senior thesis about the dangers of vaccines, this college student encountered a startling lack of academic proof.

“When I search deep into GSU’s library, every article seems to be pro-vax and nothing supporting my argument,” the student writes in a Facebook group, presumably to classmates. (A screenshot of the post was shared on Reddit.)

Rather than accept that the initial hypothesis—vaccines are dangerous—could be wrong, the student turned to the internet for some alternative facts.

“Does anyone have some ‘scholarly’ docs that I can use to prove my point effectively?” the student asks.

Maybe the end of the semester was approaching. Maybe getting a new thesis topic approved was too daunting. The point here is not to put a college student on blast, but to emphasize that this is a perfect summation of the anti-vaxxer movement. The properly-researched “evidence” that links vaccines to toxins, autism, ADHD, cancer—you name it—does not exist. However, studies emphasizing the safety and efficacy of vaccines do.

“Vaccines have been part of the fabric of our society for decades and are the most significant medical innovation of our time,” the American Academy of Pediatrics said in a statement last year. “Vaccines are safe. Vaccines are effective. Vaccines save lives.”

The good news? About 90 percent of Americans are vaccinated, according to a CDC estimate. More good news: Sometimes, all it takes to change the mind of a parent who is hesitant to vaccinate their child is a candid, judgment-free conversation.