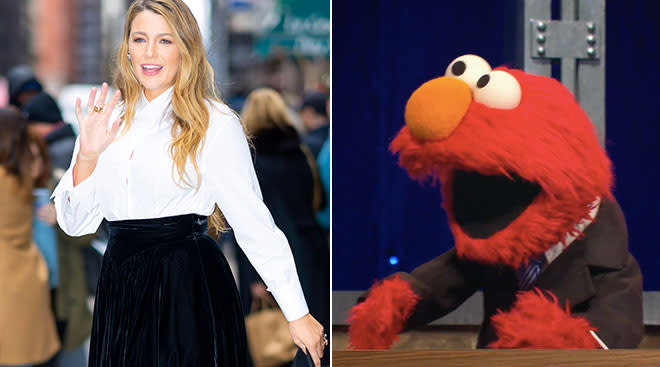 Elmo is hosting his own talk show—right from his own living room.

The Not Too Late Show with Elmo is set to premier next week on HBO’s new streaming service, HBO Max. The show, which is produced by Sesame Workshop, will not only feature Elmo as the host, but it will also include Cookie Monster as his co-host, other friends from Sesame Street as backstage crew and an in-house band. Plus, the show already has an impressive lineup of featured celebrity guests, including Jimmy Fallon, who will teach Elmo the ropes, Old Town Road singer Lil Nas X, comedian John Mulaney (who will be competing in a tricycle race), the Jonas Brothers, actress Blake Lively and more.

While the show was announced back in the fall of last year as part of a deal between Sesame Workshop and HBO Max, it remains sensitive to the current global climate. The show, along with other recent projects from Sesame Workshop, aims to bring people together and share an uplifting experience. “Young children love seeing their Sesame Street friends in a new way, madcap behind-the-scenes humor keeps older kids laughing, and grown-ups get a kick out of seeing celebrity guests have silly fun with Elmo,” a release from the company states. “Creating a space for gathering, giggling, and simply being together, The Not-Too-Late-Show delights in spreading the loving spirit of the beloved red monster himself.

Along with featuring celebrity guests, the show will sprinkle teaching moments throughout. Plus, each episode of the show will center around a different part of Elmo’s bedtime routine, like brushing teeth, putting on pajamas, reading a story and more, so it’s the perfect way to help your little one wind down before bed.

You can watch the premier of The Not-Too-Late-Show on Wednesday, May 27 on HBO Max.

How to Enjoy Summertime Fun With Baby in Tow

The 10 Best Hanukkah Books to Read With Your Kids