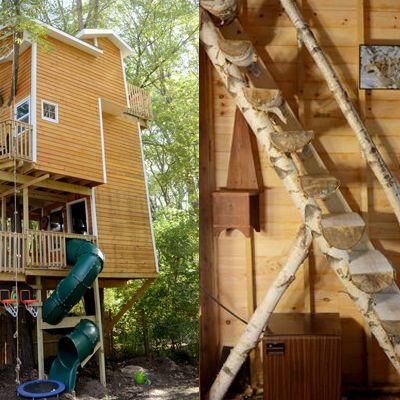 Attleboro, Massachusetts contractor Jay Hewitt has certainly “branched” out from the everyday DIY projects and hacks we’ve seen trending these days. This grandfather has designed and built a mind-blowing three-story, 780-square-foot treehouse for his 5-year-old grandson and 4-year-old granddaughter.

Hewitt says that before his grandkids, Jacob and Kayla, were born, he knew he wanted to build a treehouse for them in his backyard. “I had a treehouse when I was a kid, but it was basically a four-by-eight sheet of plywood. I never dreamed that a treehouse would be anything like this.” Hewitt told Attleboro newspaper The Sun Chronicle. The stunningly-crafted clubhouse is complete with an entryway, stairwell, family room, loft and a huge slide that carries the children to the ground below.

If that isn’t enough to impress you, Hewitt was able to combine the old-school days of playing outside with the luxury of working electricity. The treehouse—which is sure to make all the kids from The Sandlot jealous­—is supported by four massive oak tree and took the last year and a half for Hewitt to build. “I designed it as I built it,” Hewitt told The Huffington Post. “If I drew up a set of prints to work from, it would not have looked like this.”

Shockingly, Hewitt and his wife are currently trying to sell their property, though we can bet his grandkids won’t want to imagine him planting his roots anywhere else. If the property doesn’t sell, Hewitt plans to add a bridge, additional platform and roof deck to the treehouse next year.