Naming baby can be quite a different experience depending on which country you live in! 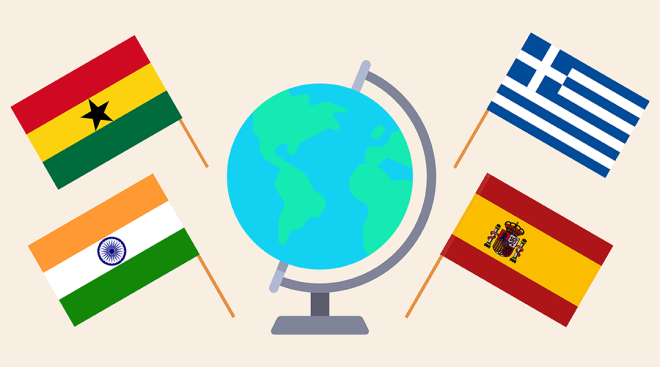 Though we live in an increasingly globalized world, many countries still retain naming traditions unique to them. If you’re looking for some inspiration, you might look to how babies are named elsewhere in the world. To help, we dug into a handful of baby naming traditions found around the globe.

Traditionally, many babies in Greece have been named after grandparents. Sometimes parents even combine grandparents’ names on the paternal and maternal side to form one (ex. Mari and Anna become Marianna). However, recently, many parents have started giving grandparents’ names baby as a middle name. Baby names can also be influenced by saints and the Greek Orthodox Church, but this is less common. Babies named after saints may also celebrate the “name day” of the saint they’re named after. The “name day” can be treated like a birthday.

Horoscopes play an important role in Indian culture. When it comes to naming baby, many parents often choose one that is reflective of the nakshatra, or the position of the star constellation, as well as the greh, or the position of the planets, at the time of birth. For the most part, while parents may have a few options they like for baby, they wait until after baby is born to decide on a final name. The name is usually based on letters and phonetic sounds considered to be auspicious based on baby’s nakshatras and the planet positioning when baby was born. Traditionally, Indian parents have also given their children two names: Their legal name, which is the name written on their birth certificate and legal form, as well as a nickname, which is the name they often become known as for close family members and friends.

Many babies in Ireland are named after paternal and maternal relatives, including grandparents, aunts, uncles, etc. This may also extend to baby’s middle name. Plus, while this tradition isn’t as common as it once was, babies born on a saint’s day might be given that name. For example, a baby born on St. Patrick’s day might be named Patrick.

In Ghana, babies are named during a ceremony held a few days after their birth, with relatives and close friends in attendance. Usually, this is the first time loved ones outside the home see the newborn. Baby is usually named by the father or another older member of the family, and the name is reflective of the child’s birth and characteristics. Baby’s first name is based on their gender and the day they were born, while their second name can be the same as an older family member. The belief is that the child will inherit the good qualities of their namesake.

Traditionally, many babies in China have a name that is three characters (and syllables) long. As the Chinese alphabet consists of thousands of characters, it’s rare to find two people with the same name. The given name may be reflective of the natural world or baby’s personality and gender, or it may be personal to baby’s parents. It’s also important to note that surnames come before given names, and people are usually referred to as their full name as a sign of respect. Nicknames are often only used by close family and friends. While this has been the tradition in China, later on in life, such as during travels or forgeign studies, many Chinese people adopt a Western-sounding name, keeping their given name as a middle name.

Icelanders typically don’t have family names, and different generations within the same family could have different last names. Last names are typically based on the father’s first name, adding -son to it for boys and -dóttir to it for girls. Plus, when it comes to naming baby, Icelanders have to take a few things into consideration. The country’s Personal Names Register includes all the Icelandic names that have been approved by the Iceland Naming Committee. If baby’s name isn’t already approved, parents can apply for it to be approved by paying a fee. For approval, baby’s name must “be able to have a genitive ending or have been adopted through custom in the Icelandic language, must be adaptable to the structure of the Icelandic language and spelling conventions and must not cause the bearer embarrassment.” Additionally, no Icelander can have more than three personal names.

In Spanish cultures, people can often have one or two given names. Traditionally, these have had origins in the Bible, like many other Christian countries, and parents may opt to name baby after a saint or a martyr. Babies with the name of a saint may celebrate a “name day,” like a birthday, on that saint’s day. In recent years, however, more parents are choosing more modern and international names, inspired by athletes and celebrities. When it comes to surnames, Spanish cultures use both paternal and maternal surnames, as women usually don’t change their name after marriage, meaning baby will likely have two last names and they’ll be different from their parents’. The first would be the paternal surname (father’s first surname) and the second would be the maternal surname (mother’s first surname).