16 Celebrities Who Went the Adoption Route

Single moms, blended households, same-sex parents—these stars prove that love is the only thing you need to define a family. 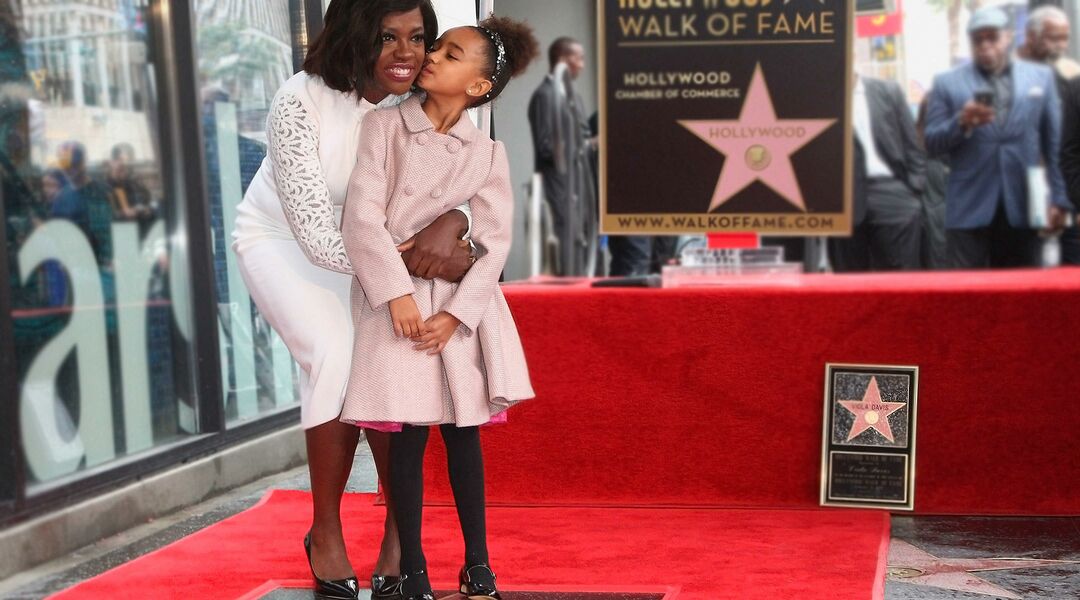 There’s more than one way to become a parent: Some give birth to their babies, some welcome their child through surrogacy, and others expand their families by adopting. These celebrity moms and dads have brought babies home from around the world and are reveling in the joys of parenthood. Here are some of their heartwarming stories. 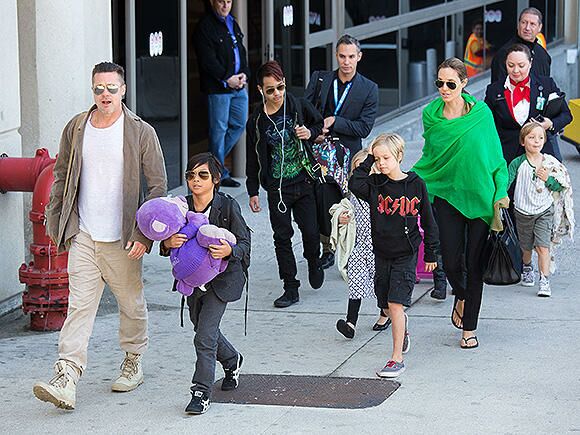 Though Brangelina split in 2016—and they’re still working out a custody agreement—the Jolie-Pitt clan is still the perfect illustration of a blended family. After bringing Maddox home 15 years ago, Jolie and Pitt grew their brood to include three adopted children and three biological ones. With such a full house, it’s hard to believe the actress once imagined her life going in an entirely different direction. “I never thought I’d have children,” the mother of six said. Boy, was she wrong! (Elle) 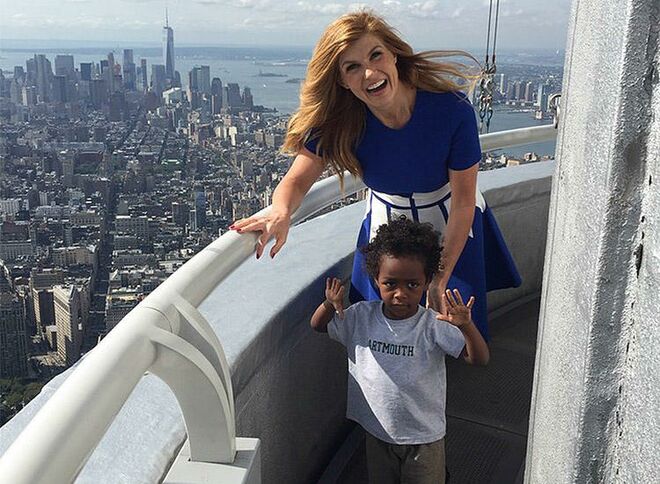 The Nashville actress adopted her son, nicknamed Yoby, as an infant from Ethiopia, and since then he’s had a major influence on his mom. “He, from the beginning, just inherently has had such an open and curious heart and love of life… He’s very into learning and seeing what’s happening and seeing what people are doing. I just love that about him. And it immediately opens me up as well.” (People) 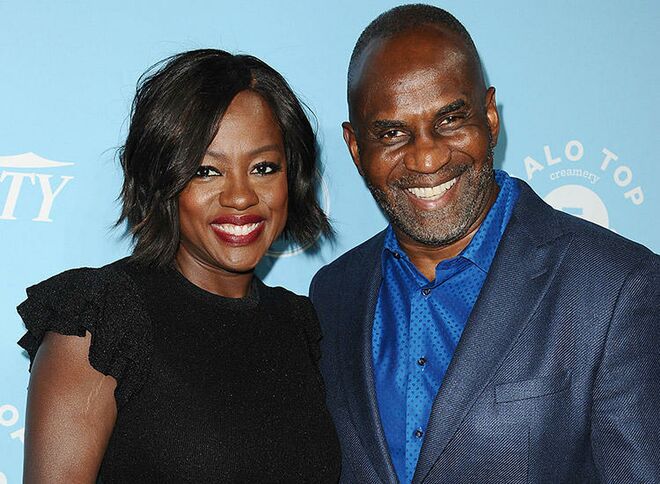 How to Get Away With Murder’s Davis has charmed millions of people around the world, but it’s her little fan club waiting at home that gives her the most joy. “I feel like a star at home only because she loves me so much,” Davis says of her adopted daughter Genesis. “I mean, it’s a red carpet every day. It’s wonderful!” ([People])(http://celebritybabies.people.com/2011/12/16/extremely-loud-incredibly-close-premiere-viola-davis-motherhood-gives-purpose/) 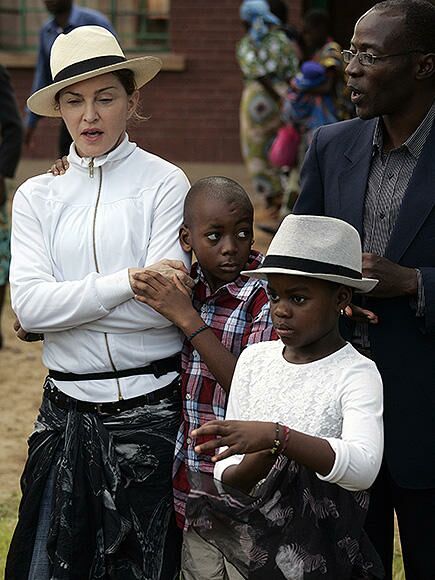 Even Madonna, the queen of stirring up controversy, wasn’t prepared for the public backlash her Malawi adoptions caused: “I could get my head around people giving me a hard time for publishing my Sex book, even kissing Britney Spears at an awards show, but trying to save a child’s life was not something I thought I would be punished for.” After a drawn-out legal battle, the single mom eventually won the right to make son David and, later, daughter Mercy a part of her growing family. (Harper’s Bazaar) 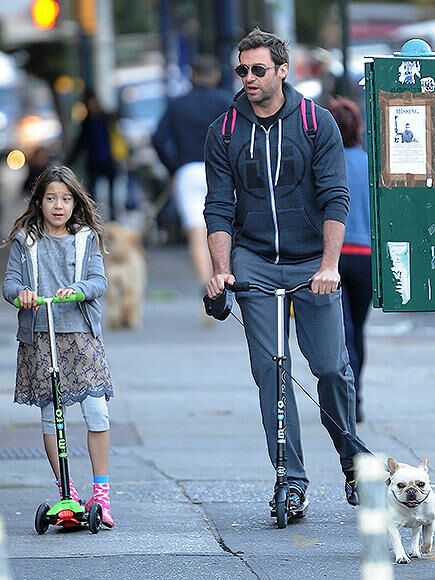 After facing infertility, undergoing IVF and suffering several miscarriages, Jackman and his wife finally decided to give up trying to conceive—and put their energies into adoption instead. The Wolverine star has said that adoption was the family’s “destiny” and when his son Oscar was born, “all the heartache [of the past] melted away…You can’t prepare for that moment, nothing can prepare you.” (E! Online) 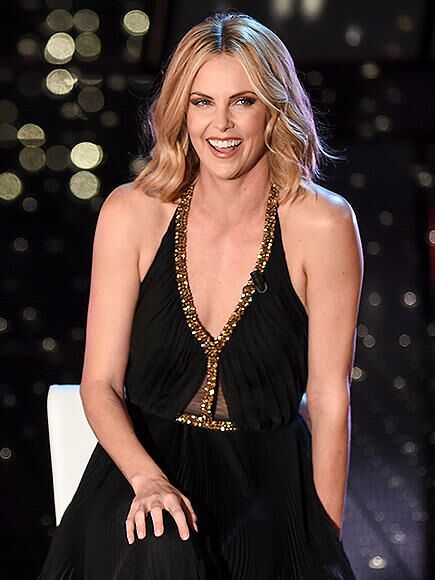 Even as a young girl, Theron had a feeling she would adopt one day. “I had this awareness of adoption, so this wasn’t a last-minute thought. It was something that was always under my skin,” she recalls. Although the process wasn’t always easy, Theron eventually welcomed her little boy. “You kind of go through situations that don’t work out and then all of a sudden you have this baby in your hands and you forget about all of that. You just realize that everything unfolded exactly the way it was supposed to.” She expanded her family again when she adopted her daughter, August. (Interview, Us Weekly 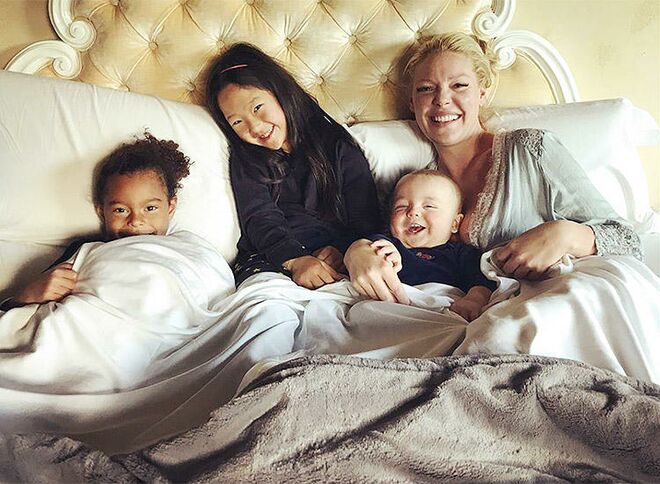 For the superstar actress, adoption was a no-brainer. “I’ve always wanted to adopt,” says Heigl, who’s outspoken about encouraging others to adopt too. “My sister Meg is Korean, and my parents adopted her three years before I was born. I wanted my own family to resemble the one I came from.” Heigl gushed that when she got the first picture of Naleigh, she’d look at it “about 14 times a day.” Sounds like a typical new mom to us. ([Scholastic])(http://www.scholastic.com/parents/resources/article/parent-child/katherine-heigl-i-always-knew-id-adopt) 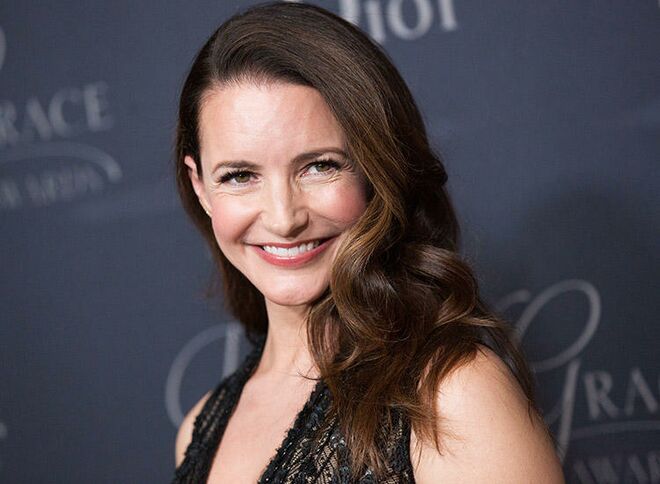 For the Sex and the City star, life imitates art. Just like her character Charlotte York on the series, Davis adopted a little girl. The actress had been thinking of adopting for a while, and though she thought single motherhood could be daunting—“it’s a really hard job”—she knew it was the right move. “This is something I have wanted for a very long time,” Davis says. “Having this wish come true is even more gratifying than I ever had imagined. I feel so blessed.” (People and Us Weekly) 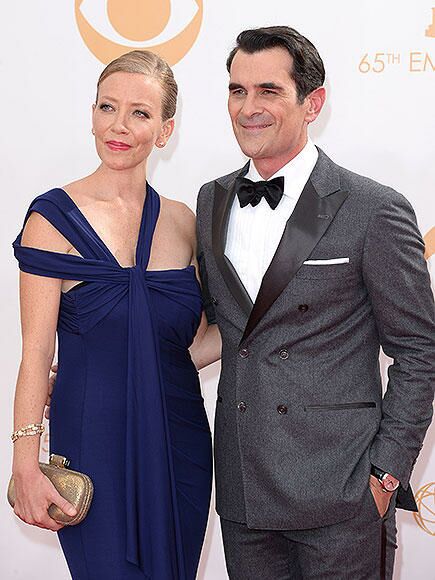 As everyone’s favorite TV dad on Modern Family and the real-life dad of two adopted daughters, Burrell has learned a ton about parenting. “I guess I didn’t realize that you actually fall in love with children, that like with any other relationship, as time goes on you actually love them more,” he says. If this were a TV show, now’s the part where we’d all go “awww.” Okay, we’re doing that anyway. (Elle 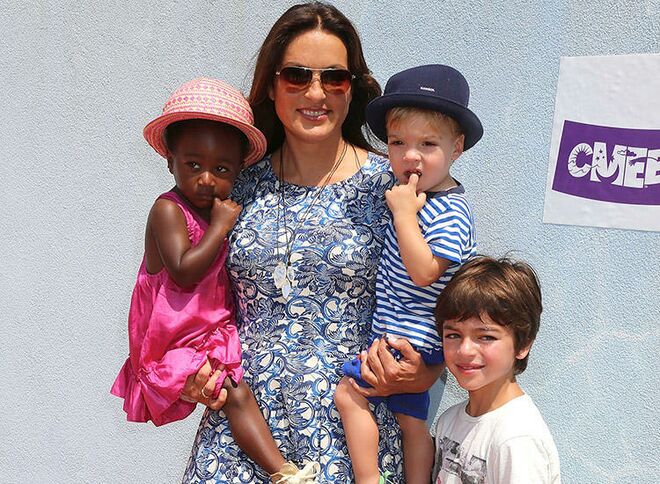 The Law & Order: SVU star was totally caught off guard when the opportunity to adopt another child came just six months after she helped deliver her adopted daughter Amaya. “We never in a million years thought it would happen this quickly, but something inside of us knew that this was right, and we said, ‘Yes, yes, yes!’” Big brother August was just as enthusiastic. “[He] thinks this was all his idea! He said, ‘I want a baby sister,’ and Amaya came. Then he said, ‘I want a baby brother,’ and Andrew came,” recalls Hargitay, who adds, “August is feeling pretty powerful!” (Good Housekeeping; People) 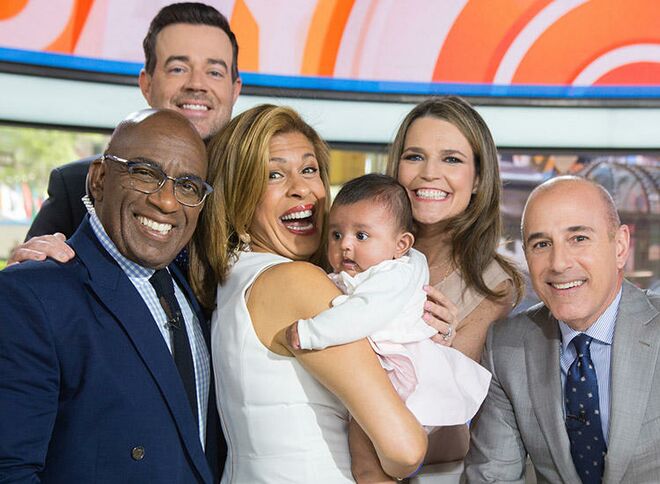 Even after her battle with breast cancer left Hoda Kotb unable to have children, she wasn’t ready to give up her dream of becoming a mom. So she teamed up with an adoption agency, and a few months later she brought home her daughter. “I wake up sometimes and go, ‘Oh my God, I have a baby!’” she has said. “But it feels totally real. I guess if you’ve been waiting this long for something and you wish for it, pray for it, hope for it, wonder if it will ever be, and then it happens, nothing’s more real. Nothing.” (People) 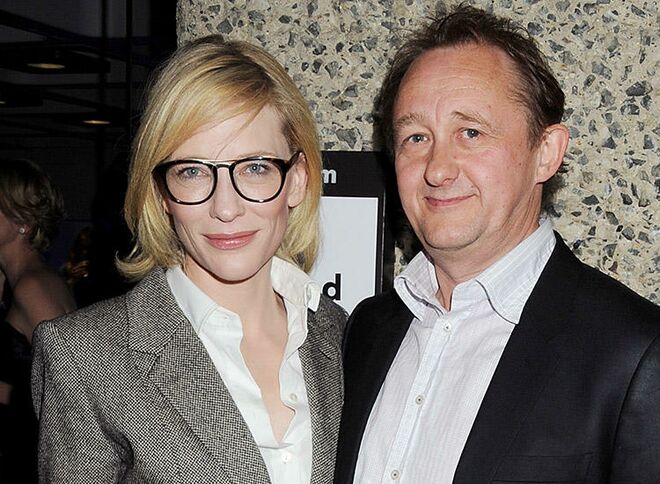 Though Cate Blanchett waited 14 years after the birth of her oldest son to adopt, she and her husband, Andrew Upton, were always interested in the possibility. “There’s a lot of children out there who don’t have the good fortune that our biological children do, so it’s wonderful,” she said. And despite having three sons already, she still had the new-mom buzz. "Fourth time around, it’s extraordinary,” she said. “We’re besotted.” (US Weekly) 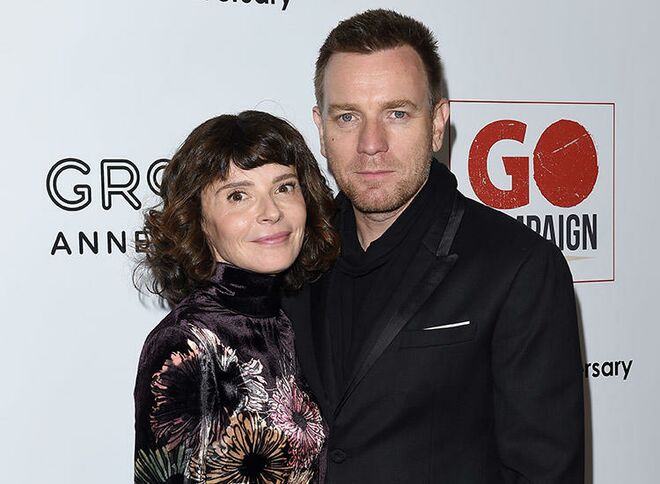 In 2004, McGregor and good friend Charley Boorman spent three months traversing the globe during their 20,000-mile motorcycle journey for the Bravo TV series Long Way Round, and Mongolia was one of the stops on their trip. Two years later, the actor returned to Mongolia to adopt his then 4-year-old daughter. Though McGregor has always tried to keep his family life under wraps, he embraces trying to spend as much time as possible with his kids. “'I recognise it can be boring to play with young children— to tell a story over and over again, let’s say—but the secret is being there. If you’ve made a decision to play with your children, then play with them. Don’t be looking through papers on your desk or sneaking off to the computer… Lose yourself in their world. Even if you do it for a short time, it will mean a lot to you and to them.” (People, Daily Mail) 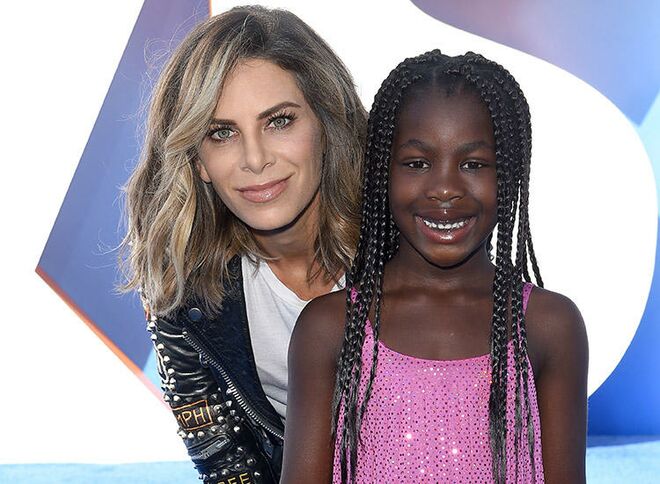 The adoption process was a serious labor of love for Jillian Michaels, who struggled for years to sort out paperwork problems. But for the star fitness trainer and her partner, Heidi, every minute of that work became worth it when their daughter arrived—just days after Heidi gave birth to their son Phoenix. “That moment of getting Lu out of Haiti and the wheels of the plane touching down in New York…she was an American citizen after two years,” recalls Michaels. “It was a heavy moment.” (People 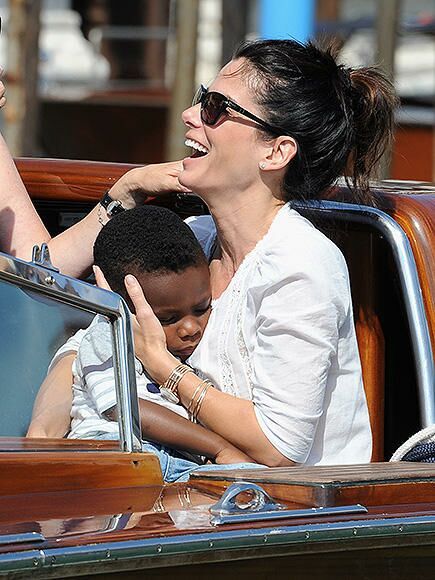 Seven years after revealing to the world that she’d secretly adopted a baby born in New Orleans, the movie star has totally settled into her role as mom. An emotional Bullock once described how adopting her son changed her life: “I had no idea what love was [before Louis]. I had no idea what lack of sleep was. I had no idea what milestones felt like.” In 2015 she expanded her brood when she adopted daughter Laila from foster care. (E Online) 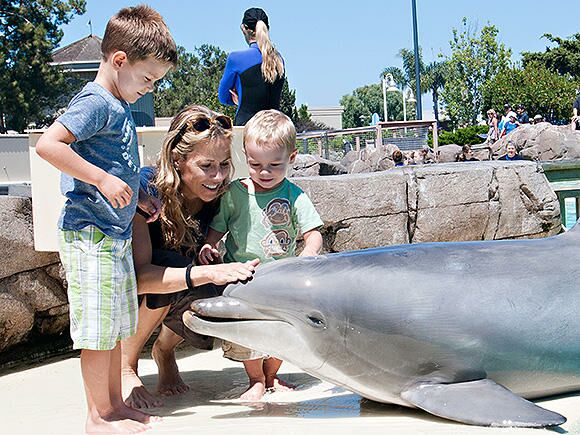 From a very public breakup to a battle with breast cancer, nine-time Grammy winner Crow has faced adversity like a champ, so there was never any doubt she would be able to handle single motherhood. “I love the idea of adopting,” she says, adding that she would have adopted even if she had biological kids too. “I always thought I had an immense amount of love to give.” (OK! Magazine)