In 2015, Sarah Robinson was ready to return to her job as an ed-tech consultant after having her first child, Jack. Just as she was about to head out the door, Jack peed all over her. “It was such a frustrating, hilarious, I-might-break-down-and-cry kind of moment,” Robinson says. She immediately texted her two best friends, Hannah Hudson and Natalie Ralston, to vent—and to laugh. Right then, the moms agreed: There should be an emoji to describe the feeling.

What started as a funny back-and-forth became a reality, as the three women hired an illustrator and an app developer to bring their vision to life. EmojiMom, with its hundreds of cartoonlike depictions of everything from the pain of pumping to the weirdness of a kicking fetus, was released in July 2016. Within a week, EmojiMom reached No. 3 on the App Store (it’s now available for Android too), gained a social following of thousands and garnered plenty of media coverage. “We had tapped into something,” says Ralston, mom to 2-year-old Hattie.

“The only way the three of us survived new motherhood was through our group texts and messages,” says Hudson, a mom of two. “Mom emojis might seem silly to some, but for us they were truly a lifeline—and that’s our hope for other moms too.” 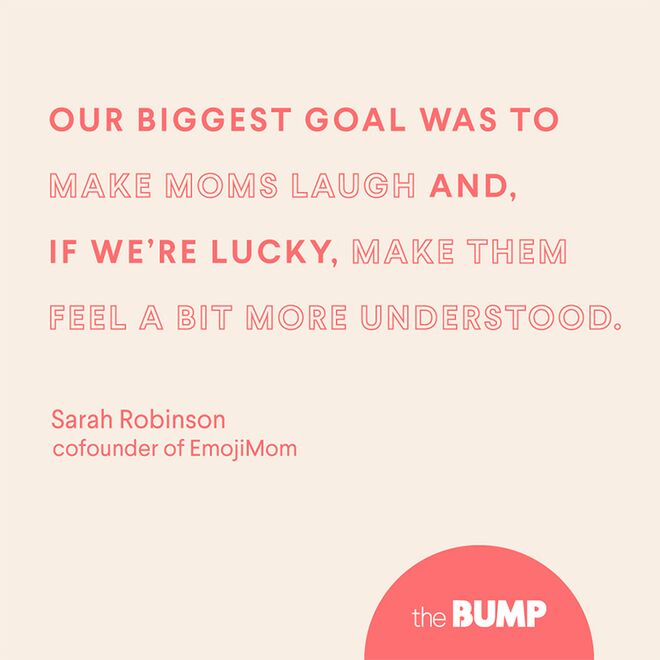 “Too often there’s an assumption that women can’t be creators or innovators during this stage of life, when in fact motherhood has been a deep source of creativity for me,” Hudson says. “Watching my kids grow up, seeing things through their eyes and forming deep connections with other moms has given rise to so many ideas and new topics to explore.”

“A lot about parenthood is isolating, and your experiences feel so wonderful yet awful when you’re going through them,” Robinson says. “We had fertility support groups thanking us for our IVF and IUI emoji and adoptive moms thanking us for our “Adoption Day!” celebratory emoji. It’s the best feeling to make someone—even for just a split second, with something as silly as an emoji—say, ‘Oh, cool, they included me in here. That feeling is me.’ ”

“God bless Internet message boards. I’ve gotten so much parenting advice from them over the years, and many of our emoji were inspired by posts or threads that pop up on the regular,” Hudson says. “We’re always brainstorming ideas for new emoji—older kid emoji may be headed your way! We love hearing ideas from our readers and users, and those get put on the top of the list. We’re also exploring some partnership opportunities to see how we can make the app grow and be even better for moms.”