How I Came to Terms With My Daughter’s Princess Obsession

The barrage of Disney Princess dolls, books and clothes can make any feminist mom squirm. But sometimes, in the words of Elsa, you just need to let it go. 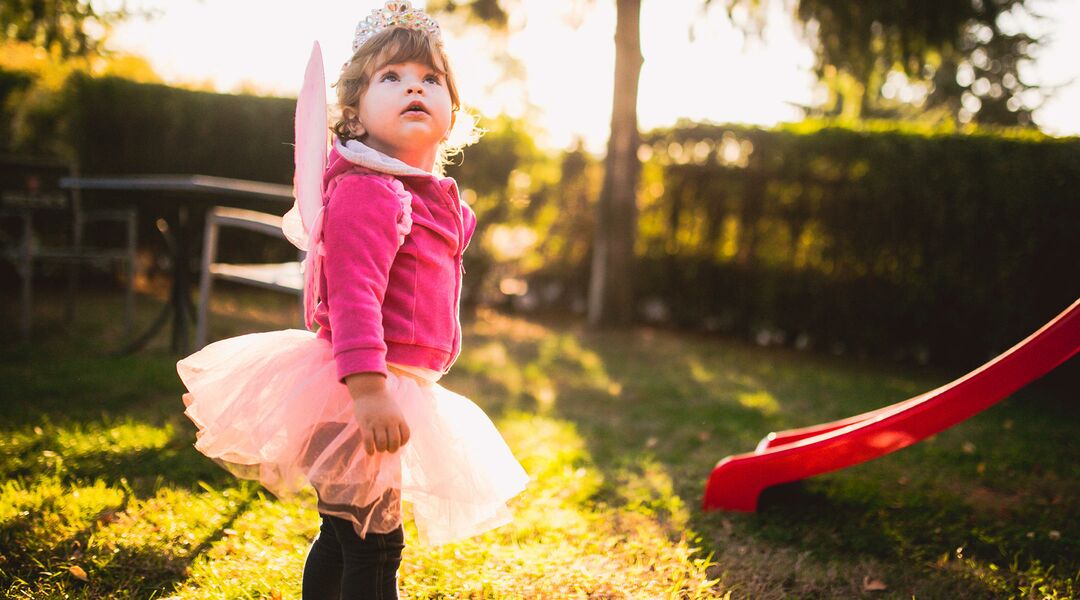 When my daughter Mari first started loving everything pink and princess-y, I quickly engaged in the trifecta of unwise parental reaction: I resisted. I worried. I despaired. Here I had been so meticulous in my gender-neutral choices for her and still she was falling down this rabbit hole of tiaras and tulle ball gowns. How could this happen?

So I pushed back—until I didn’t. But that switch didn’t happen instantly. It was gradual, like the way your brand new couch accumulates stains and scuffs over the years, until one day you look at it and realize you have an ugly, worn couch. But you love it anyway. It’s the same with little princesses. They steamroll over your best intentions to raise children who won’t be prey to Disney marketing schemes, and then they teach you the most important lesson of all: Sometimes you just have to let it go (but without acquiring every Disney product they beg you to buy!).

I suspect my trajectory of princess resistance—and ultimately acceptance—isn’t unusual among a certain kind of feminist mother. Here are the stages I went through on my road to Princess Acceptance. It’s been quite a ride.

Once upon a time, I banned all princess items from our home. We didn’t own any Barbie dolls or, for that matter, any kind of doll at all that suggested the beauty ideal or the existence of stiletto heels. My daughter never wore clothing with the image of a princess (or any commercial image) displayed on the print. We lived in a home of generic clothing—one in which I wore the pants in the family. My husband also wore pants, incidentally, and so did my son and daughter. We all wore pants. Life was so much simpler then!

The first princess item that entered our home was a book. It was bubble-gum pink. It had images of the Disney Princesses dressed in sparkly satin dresses on the front cover and buttons on the side that played songs like “If You’re Happy and You Know It” and “The More We get Together.” It was sent by my in-laws.

I could hardly throw it away—I mean, these are my in-laws. So we kept the book and read it to my daughter, who loved it instantly. And I mean she loved this book. All of the other books fell into a funk, because Mari completely ignored them and only wanted to read Once Upon a Princess. Goodnight Moon was especially needy. Our gender-neutral sanctum had been infiltrated.

Around the same time that the princess book arrived in our home—a book we must have read 973 times— Mari started preschool. This meant that for the first time, she was made aware of the existence of sneakers with rhinestones on them. She noticed the popularity of water bottles with pictures of Aurora and Jasmine and Ariel on them. She had friends who had painted toenails and toy make-up kits. And while our home was not instantly filled with these regressive products and accessories, I did start purchasing a few items— an Elsa t-shirt here, a Cinderella umbrella there. Why did I do this? Because of the same impulse that dooms so many parents: guilt. Mari was still nursing at age 2 and we decided to wean her. So as I was taking away the thing that comforted her most (my boob), I felt compelled to compensate with some princess bling.

I’m not proud of it, but that’s parenting, folks. Some days we are the most awesome parents ever, making the homemade healthy lasagna with spinach leaves hiding inside the sauce and a freshly baked cake sweetened with apples and honey. Other days it’s leftover chicken nuggets and Fruity Pebbles. A wise friend once said to me, “You do the best that you can at the time that you do it.” So very true.

After a few months of small compromises, during which time my daughter acquired her first princess dress, a princess backpack and various tutus, I started to notice that there was glitter everywhere in our home. What’s more, there were multiple princess books and toys and puzzles and dolls and even a Frozen version of the game of Trouble. I had seen Tangled at least 11 times and The Princess and the Frog too many to count. What happened to my princess resistance? It was gone, much like the Arendelle Spring after Elsa got emotionally triggered.

Speaking of Elsa—once you throw a Frozen-themed birthday party, there’s no use pretending you’re still a progressive parent who eschews commercialization and marketing campaigns that divide children according to gender. And so it was with me. When Mari turned 4, one year after she first started loving princesses, I let go of all pretense and just went ahead and threw her a Frozen birthday party. There was an Elsa cake and Elsa napkins and Elsa plates and Elsa party favors. We organized a Frozen scavenger hunt in our local park. It was actually a pretty awesome party, if I say so myself.

And that’s how I came to full princess acceptance. Once I stopped resisting, I worked on the despairing, worrying parts of this equation. That’s a longer story, but in the end, after researching this subject exhaustively, it also has a happy ending. The princess obsession is vexing, intense and often hilarious, but it’s actually not harmful in itself. And when your happy little girl is blowing out her four candles on her Elsa birthday cake, it’s even kind of fun.

Devorah Blachor is the author of The Feminist’s Guide To Raising A Little Princess. She’s written for The New York Times’ Motherlode, The Washington Post’s On Parenting, McSweeney’s, Redbook, and Good Housekeeping, among many others.