If you’re thinking about passing down a family name to baby, you may be wondering about some of the traditional rules around the practice. Here’s what you need to know. 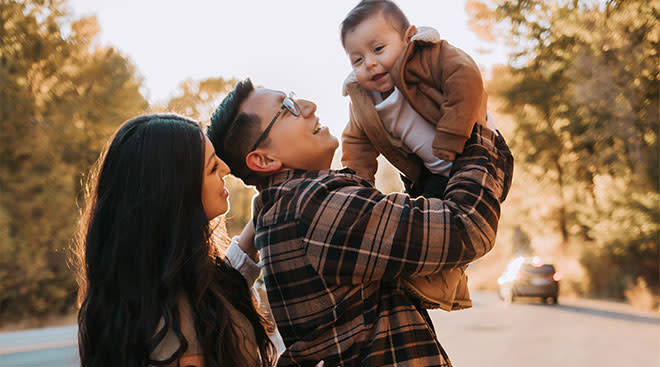 Naming baby can be tricky business. While some parents want their child to have a unique name specific to them, others opt to carry on family traditions and pass on a name that’s been in the family for generations. But, traditionally, there have been some rules when it comes to passing down names. Curious to find out when Jr. should be used versus II? Or what common nicknames have been used for names that are generationally III, IV, etc.? Keep reading for some answers! But remember, for most people (royals aside) there’s no naming police when it comes to passing down a name to baby. While these have traditionally been the rules, parents should, of course, name baby in the way they see fit.

What’s the difference between Jr. and II?

When passing down a name, you may be wondering whether Jr. or II is the right suffix. Usually, the suffix Jr. is used for a baby boy who has the same name as his father, while II is used when a baby boy is named for a male relative other than the father. When three men generationally have the same name, like a grandfather, father and son, II can be used, but Jr. is usually preferred. However, some experts note that if a boy is born after his father’s death, but is named for him, the suffix should be II rather than Jr. Historically, experts have said men with the suffix Jr. should use it as long as their father is alive. After that, he may opt to drop it or retain it (to avoid confusion with his late father or in case there’s a III, IV, etc.). The caveat is that in order to use a suffix, the entire name, including first, middle and last, should be exactly the same.

For the suffixes III, IV, V and so on and so forth, if a boy is named after his father, and his father is a Jr. or II, then the boy becomes the third (III) and, as the name is passed down, later generations become the fourth (IV), the fifth (V)—you get the idea. Again, historically, these suffixes have only been used when the entire name has been passed on.

When writing these suffixes, a comma has traditionally been used to separate the suffix from the surname (Sr., Jr., etc.), but no punctuation is used for numeral suffixes (II, III, IV, etc.).

Passing down a name among different generations is a common tradition. Renowned boxer George Edward Foreman even opted to pass down his name to all five of his sons. When names are passed down, it’s also common to use nicknames in everyday life rather than calling someone by their given name.

Does this only apply to boys?

While there is no rule stating only men can have generational names, historically it has only applied to men. The reason behind this is women traditionally took on the last name of their husband, eliminating the need for a suffix to differentiate them from another member of their family. While girls can be named Jr., II and beyond it’s less common, and the suffix is usually only used to distinguish them from another family member until they are married.

How does passing down a middle name work?

Rather than passing down the entire name, many parents also choose to honor loved ones by giving baby their name as a middle name. Some families do pass down the same middle name between several generations, but there aren’t any traditional rules here.

Remember, there are no hard and fast rules when it comes to naming baby. While these have been the historical traditions, when it comes to passing down a name among generations, ultimately, baby’s name is dependent on your wishes.

Whether you’ve had baby’s name picked out since you found out you were pregnant or are undecided between all the options out there, The Bump is here to help. To learn more about how naming traditions work, as well as to find more baby name information, check out our naming tool to help you find the right pick.