Ask the Pediatrician: What Are the Best Kinds of Formula? 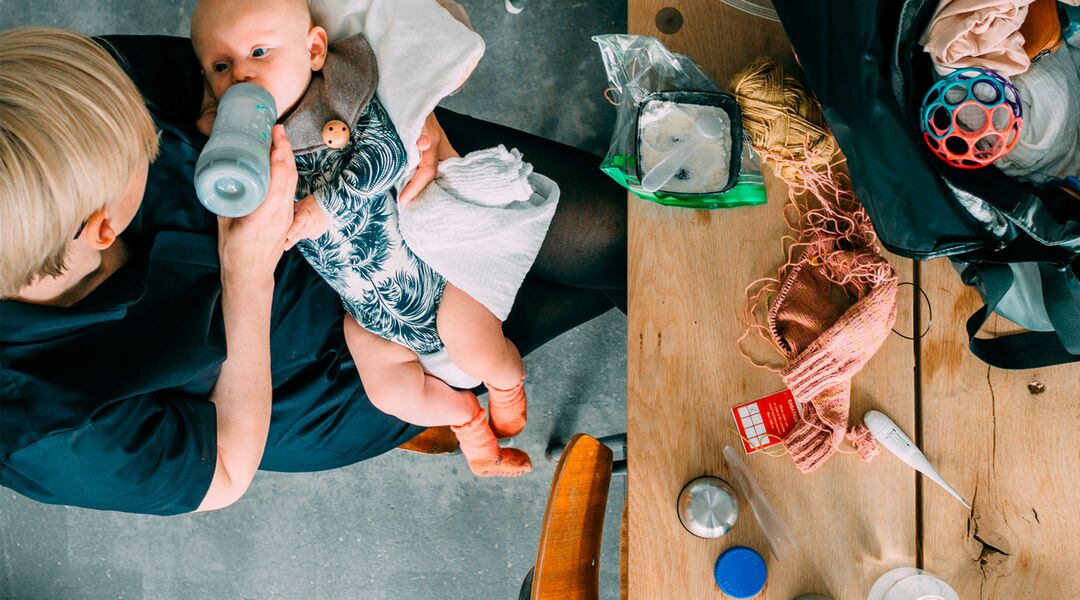 Meet Dina DiMaggio, MD, and Anthony F. Porto MD, MPH, official spokespeople for the American Academy of Pediatrics and the co-authors of The Pediatrician’s Guide to Feeding Babies and Toddlers. Each month, they’ll write about the latest AAP guidelines, studies and seasonal issues affecting babies and toddlers. Follow them on Instagram @pediatriciansguide.

As you’re probably well aware, the American Academy of Pediatrics (AAP) recommends exclusive breastfeeding for the first six months of baby’s life. But for parents who need or want to give formula to their infants, there’s hardly such a straightward recommendation. While most commercial infant formulas have been developed based on extensive research and aim to replicate the nutrition of human breast milk as closely as possible, there are so many on the market that choosing the right one may seem overwhelming.

We’re here to help. Here are 10 things you should know about choosing an infant formula:

There is no one best formula

Different babies may do better with different formulas. For healthy full-term infants, we typically start with a cow’s milk–based formula, such as Enfamil Complete, Similac Advance or the store-brand equivalent. There are also organic versions of these formulas available as well, such as Earth’s Best Organic. For vegetarians or vegans, soy-based formulas can be used instead.

Formulas for children with acid reflux or colic are available, though often not necessary

Though most children will do well on a traditional cow’s milk protein formula, there are many formulas on the market that have different or added components.

Anti-reflux formulas are marketed to help treat children with spit-up. Though gastroesophageal reflux is nearly universal in babies, most children who are spitting up but growing well will not require any treatment or change in formula. Of the major infant formula brands, there are currently two different products on the market, Enfamil AR and Similac for Spit-up, where rice has been added to the formula to help decrease spit-up.

Sensitive formulas are typically lactose free, or contain limited lactose, and have a higher whey to casein ratio to closely mimic breast milk. They may also contain partially broken down whey protein (Gerber Good Start), which is thought to be easier to digest and may decrease gas production. Some of these formulas may also contain prebiotics (the majority of Similac formulas), while others contain probiotics (Gerber Good Start Gentle for Supplementing and Gerber Good Start Soothe), which may decrease gas and symptoms of colic.

All additives to infant formulas are regulated by the FDA, which requires proof of safety and efficacy for each additive. The benefits of changing formulas, however, vary from child to child. We often see parents change formula during the peak of colic, around 6 to 8 weeks, when babies may appear gassier or more fussy, but this colic phase generally tends to resolve on its own around 3 to 4 months, regardless of formula changes.

Calories in formula typically mimic that of breast milk

Formula preparation depends on whether you use powder, concentrate or ready-to-feed

Formulas come in three different forms: powder, concentrate and ready-to-feed. In most cases, when using powder formula, you place two ounces of water in the bottle, then add one level scoop of powder formula to the bottle and shake well. It is important to read the labels since some formulas, including some amino-acid based formulas, such as Neocate and PurAmino, need to be mixed at a different ratio, with one ounce of water for every one scoop of formula.

Concentrate formula should be mixed at a one-to-one ratio with water. Most containers come in 13 oz. bottles, so if you mix 13 oz. of water with the entire contents, you will have 26 oz. of formula. This formula can be refrigerated for up to 48 hours. Alternatively, if you prefer to make one bottle at a time and want to make a 4 oz. bottle, you can add 2 oz. of the concentrate to 2 oz. of water and mix thoroughly.

Ready-to-feed formula is exactly what it sounds like. The formula should not be diluted with additional water and is ready to use!

How long does formula last?

A prepared bottle of formula can be kept at room temperature for no more than an hour. If the formula has been warmed, also keep it for no more than an hour, and do not rewarm it, as this increases the risk of harmful bacteria growth. By the same token, if the baby feeds from the bottle, but there is some milk left in the bottle, the leftover milk should be discarded after one hour and not be given again to the baby, since drinking from a bottle can actually introduce bacteria into the milk.
Once opened, unused ready-to-feed formula or concentrate formula should be refrigerated and used within 48 hours. If you prepare the formula from powder, unused formula, once mixed, should be refrigerated and used within 24 hours. Once a container of powder formula is opened, it should be discarded after 30 days.

Extensively hydrolyzed protein and amino acid-based formulas are known as “predigested” formulas because the protein components are already broken down. Extensively hydrolyzed protein formulas contain small peptide proteins, and in amino acid-based formulas, proteins are broken down to the smallest protein building blocks, known as amino acids. Both of these formulas are options for babies who have cow’s milk protein allergy. They tend to not taste as good as the complete cow’s milk-based formulas, but fortunately taste buds are not fully developed during infancy. Babies will gradually adjust to the new formula. These formulas, especially the amino acid-based ones, are typically more expensive, but may be covered by your insurance plan with a prescription from your physician.

Special formulas may be needed if your child is born premature

Premature infants may require additional calories, so special premature infant formulas are often necessary. Children born prematurely may also require different nutrients than children delivered at full term. They need higher amounts of calcium, phosphorus, protein, sodium, potassium, and other minerals including iron, zinc and copper. These special formulas contain these additional nutrients. Your baby’s pediatrician will monitor your baby’s growth closely to determine if and how long to stay on a special formula. Some examples of these formulas include Enfamil Enfacare and Similac Neosure.

Store-brand formulas are safe to use and cheaper!

There are over fifty store brand versions available that all provide similar safety, quality and nutritional content as brand-name formulas. The FDA has set guidelines for the nutritional standards of all infant formula, for both store and national brands. For a variety of reasons, most infants are started on popular brand-name formulas or continue on the formula offered in the hospital where they’re born, although studies have shown that switching to comparable non-brand versions is well-tolerated. In addition, store-brand versions cost as little as a third as much as the national brand equivalents.

You should not give your child whole cow’s milk before age one, even if they are taking a cow’s milk-based formula

Your child is not able to fully digest whole cow’s milk, and proteins in whole cow’s milk can also irritate the digestive tract. Cow’s milk does not contain adequate amounts of iron, linoleic acid, vitamins C and E, and other nutrients, and it contains excessive amounts of sodium, potassium and protein. Cow’s milk-based formula, however, is fortified with minerals and vitamins as well as proteins and fats that mimic human milk and allow your child to adequately grow. The same is true for milk alternatives including soy milk. Cow’s milk and milk alternatives can be started after your child is one year old.

Here is a helpful summary of all the different formulas:

Cow’s Milk Protein (purified from whole milk): These formulas contain cow’s milk protein in its complete form. They are usually the first formulas that are tried. The majority of infants will grow well on this type of formula.

Partially Hydrolyzed Protein: These formulas contain proteins that are partially broken down but can still contain larger milk proteins. They are marketed as being easier to digest.

Extensively Hydrolyzed Protein: These formulas contain proteins that are all broken down into small protein pieces. They are typically fed to infants with cow’s milk protein allergy or milk protein–induced proctocolitis. They are also lactose free.

Amino Acid: These formulas contain proteins that are broken down into the smallest protein unit, known as amino acids. They can be offered to infants with cow’s milk protein allergy or milk protein–induced proctocolitis. They are also lactose free.

Soy: These formulas contain soy protein, but unlike cow’s milk protein formulas, they are lactose-free. They are useful for some rare metabolic disorders (such as galactosemia) and temporarily after a diarrheal illness, if recommended by a physician.

Dina works as a board certified pediatrician at Pediatric Associates of NYC and at NYU Langone Medical Center. She has received numerous research awards, along with Patient’s Choice award, compassionate doctor recognition and was featured in the New York Times Magazine as a Super Doctors and New York Rising Star. She is dedicated to educating parents on baby and toddler nutrition and gives talks to parent groups throughout New York.

Anthony is a board certified pediatrician and board certified pediatric gastroenterologist. He is an Associate Professor of Pediatrics and Associate Clinical Chief of Pediatric Gastroenterology at Yale University. He has won numerous awards including the Norman J. Siegel Award at Yale University for leadership and providing outstanding clinical care as well as Physician of the Year during his time at Morgan Stanley Children’s Hospital. He has been named Castle Connolly Top Doctors since 2012. Anthony is interested in nutrition, especially in the care of children with difficulty gaining weight, feeding issues, and celiac disease. He loves teaching and educating parents and gives lectures to parents throughout New York and Connecticut.