Maxine Craig is a young mom and wife living with a life-threatening genetic condition called Cystic fibrosis. Only in recent history have people with CF lived into adulthood. Because of this, she always knew conception and pregnancy would be uncertain. Little did she know a pregnancy was just around the corner.

Cystic fibrosis is a genetic condition I’ve dealt with my whole life. Hospitalizations due to lung infections weren’t uncommon. In fact, when I got pregnant, I was undergoing the most severe IV antibiotic treatment of my life. I was on week six of what should’ve been at least six months’ worth of treatment.

Nausea and vomiting accompanied the antibiotics, so my early symptoms didn’t seem unusual. When I was two days late on my period, I figured it was probably just because of all my body was dealing with. When I asked my home nurse if that was the case, she shook her head and said, “You should probably take a pregnancy test.” I did the next morning and as soon as the second line came up, I ran, ecstatically to my husband. We were immediately overjoyed, but with a PICC line in my arm, the joy was quickly accompanied by concern. When I talked to my doctor that day, his first words were, “You may want to think about family planning.”

My husband and I, after being sure that he wasn’t a carrier of CF, so our baby couldn’t have CF, tried for about a year to get pregnant. We knew it might be difficult because, in a woman with CF, the cervical mucus is thicker, making it harder for sperm to pass through and reach an egg. When we started the journey, though, I was in relatively good health. We thought we would give it a go and figured if it didn’t happen, it was “meant to be.” By the time a year mark came up, I started to get very sick with an infection that was a cousin to tuberculosis. We stopped trying, and started treatment. To everyone’s surprise, the treatment started helping very quickly. This was good for us, considering how quickly I became pregnant.

With this new, bettered health, my husband and I felt okay with stopping treatment and doing everything we could going forward to make sure that we had a healthy baby. If we continued treatment, our baby would be assuredly deaf and have lifelong liver issues. That was a huge fear. We were so worried that even though we stopped treatment as soon as we knew we were expecting, the risk for damage was still there. Or, if I got sicker and needed to go back on IVs while pregnant, the risk of those issues would be even greater. Beyond that, I wondered if I would be able to breastfeed. I wouldn’t be able to if I needed to go right back on antibiotics after giving birth, or, heaven forbid, while pregnant. I knew that I would be able to feed my baby even if I couldn’t breastfeed, but I SO BADLY wanted to nurse my little baby. My heart would ache if I couldn’t. Essentially, my husband and I, and our families, had nine months of worrying because our fears couldn’t be realized or negated until our baby entered the world.

We were so thankful that I was able to go nine months without IVs. I had what was basically a “normal pregnancy.” I had to keep up with all medicines that were deemed safe while pregnant, which included some inhaled antibiotics. But when our baby arrived, she latched on right away, had an excellent Apgar score and a perfect hearing test, we were so grateful, thankful, elated…everything we could be, we were. 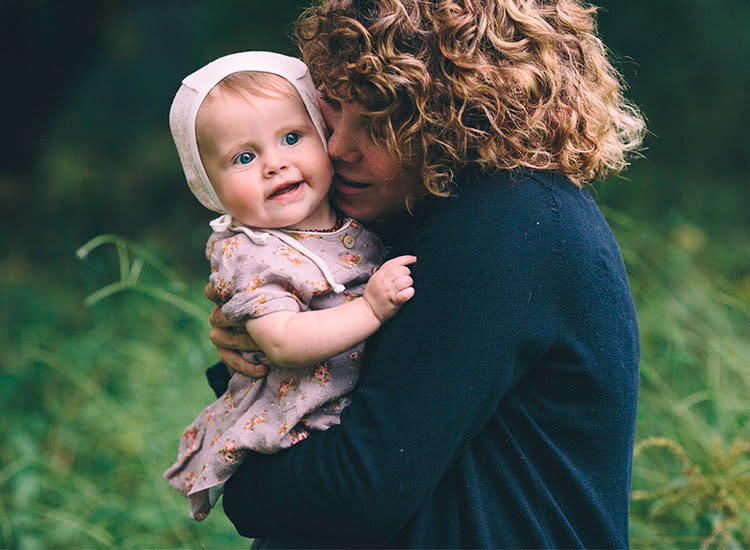 Now my baby, Indigo, is 13 months old and she’s just as perfect and healthy as she ever was. She’s the most mild and happy baby you could ever meet. We’re still nursing, which is such a blessing. To all of my doctors’ surprise, my health has been steady. We couldn’t ask for more. I know a healthy baby needs a healthy mom, so I know at some point I will need treatment again. But we live each day without worrying about the next. Today we’re happy and healthy.