This story is one for the books.
Save article
ByHana Maeda
PublishedNov 2016 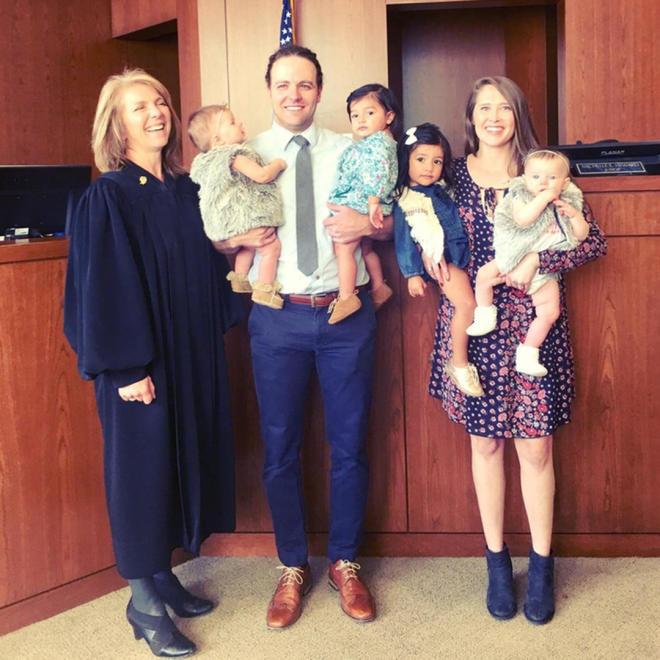 Dreams do come true—or in one couple’s case, four dreams did. Kaley and Jeremy Carling of Farmington, Utah, got more than they bargained for when they officially adopted four girls—two sets of sisters—in less than 24 hours.

Kaley shared their incredible story on Reddit along with a photo of the new family: “Our journey to get to this point has been anything but easy; health issues, infertility, failed adoptions, death,” she writes. “Heartbreak. And more heartbreak. Sh*t that is so crazy you couldn’t make it up. It seemed like it would never end. We are here to give hope to those in a similar situation to persevere, to push through. When you feel like giving up, don’t. It will all be worth it in the end…sleep deprivation and all.”

Kaley, who suffers from both lupus and rheumatoid arthritis, was told by doctors that she was unable to conceive. When the Carlings began the adoption process, they encountered even more roadblocks. The first adoption pursuit, as Kaley explains, ended in tragedy.

“We had been trying to adopt for about three years, with two failed adoptions previously,” she writes on Reddit, “one of which was completely devastating as the birth mother changed her mind right before the birth, only to be sent to prison shortly thereafter, leaving the child with her mother, both of whom were murdered when the baby was 2 months old. We were still pursuing custody of her and her older brother at the time. As I said, devastating.”

In August of 2015, Kaley and Jeremy met two foster girls, Haven, 2, and Indie, 14 months, whose mother had been sent to prison. On the very same day, they also received a call from a woman carrying twins. And just like that, the Carlings began the process of bonding with another prospective birth mother and fostering two toddlers. Twin girls Sunny and Weslie, now 9 months, officially joined big sisters Haven and Indie when all four girls were adopted on Oct. 19 and 20.

“Although four is a lot, it’s something we gave much thought and consideration to before jumping right in,” Kaley writes. “I do hope that in my lifetime I can do something to help make adoption more accessible for all who are interested in providing a loving home for a child in need.”