When you’re struggling with infertility, every expectant mom you pass is a stab in the heart, and every time you see a tiny tot running about you desperately long for a mini me of your own. For more than three years, this was the reality for Caitlin and Ben Binder-Markey. After facing more unknowns than they can count, the pair finally got the news they’d been waiting for—they were pregnant, and with twins! But they’ll never forget the rollercoaster of emotions they had to endure before they filled the missing piece of their family.

The couple shared their sweet love story and the rocky road to starting a family on a recent episode of XOXO by The Knot. The newly-launched podcast explores a modern look at love, marriage and all that follows the happily ever after. The most recent episode takes a deep dive into the Binder-Markeys relationship in the years after they said their “I Dos.” Like most couples struggling to start their family, they had no idea it would happen to them.

After three years of enjoying life as a party of two, Caitlin and Ben decided they were ready to add to their clan. “We had really enjoyed traveling and having the freedom to be spontaneous up to this point in our relationship, so it was time for the next step,” Caitlin tells The Bump. “We really had no idea how long it would take us, but I think like anyone, we were hopeful it would happen quickly—at least within a year.”

But in the blink of an eye, nearly half a year had passed. Despite their efforts trying to conceive, there was no sign of a baby-to-be on the horizon. That’s when they started to realize something wasn’t right, and Caitlin was referred to a fertility specialist. And so it began.

Luckily, the couple lives in Illinois, which is one of only a handful of states that require insurance companies to cover fertility treatments. But even without the high cost of treatments, the emotional and physical toll was draining.

“The hardest part of the entire process from start to finish was dealing with the unknown. We never had a definitive reason why we were having trouble getting pregnant, and each month was a rollercoaster of emotions—building your hopes up, holding your breath for the results and then ultimately being disappointed. And then having to do it all over again,” Caitlin recounts. “I was constantly being poked with needles, having to go in for tests and managing the change in hormones in my body…There were times when I just wanted it to stop.”

For Binder-Markey, infertility was the biggest challenge they’d ever been faced with. Caitlin was carrying the brunt of the physical burden, and Ben was in a current state of helplessness. “As the spouse of someone going through all of this you have to remember to be supportive,” Ben says. “Realize you don’t have the solutions and that is okay, but be there—truly be present—and that is usually enough.”

The most important thing for them was to never lose sight of the strong foundation of love they had built together. This meant remembering to do things that made them, well them. “We kept our connection strong by being there for each other as best we could, talking about things, being open with our feelings and also getting support from others…We also tried to keep living life throughout this process,” Caitlin says. “We booked trips, went out and took breaks. That helped keep us sane and still connected to one another.”

But after four rounds of unsuccessful inseminations, they were ready to try IVF. After enduring daily injections and regular doctor visits, they were able to retrieve five eggs from Caitlin. Only three would develop into viable embryos. Their doctor implanted only one, since the pair didn’t want to increase their chances of having twins. Even in the face of so much unknown, Caitlin had a good feeling. Unfortunately, it wouln’t last long.

“I left floating on air that day, buoyed by the possibility that I could be pregnant. Ten days later…I got a phone call on my way home from work with the news that I wasn’t pregnant,” she shares. “Never in my life have I felt so utterly defeated and just…spent.”

Keeping faith, they tried again. Of the two remaining embryos, only one made it through the thawing process. Meaning, if it didn’t work, they’d have to go through the retrieval process all over again. But then they got a call that changed their life.

“We sat in our living room, holding hands, and listened to the nurse say, ‘I have good news, you are pregnant,’ and burst into tears,” Caitlin recalls. “After two years of trying, a year plus of fertility treatments, four inseminations, two rounds of IVF, countless injections, ultrasounds and blood draws—it happened!”

The surprises didn’t stop there. “We went in for our first ultrasound and they saw two egg sacs. We just burst out laughing,” Caitlin shares. “After all this, and only putting in one egg, we end up with identical twins! We were truly in shock, and knew our lives were really going to change.” 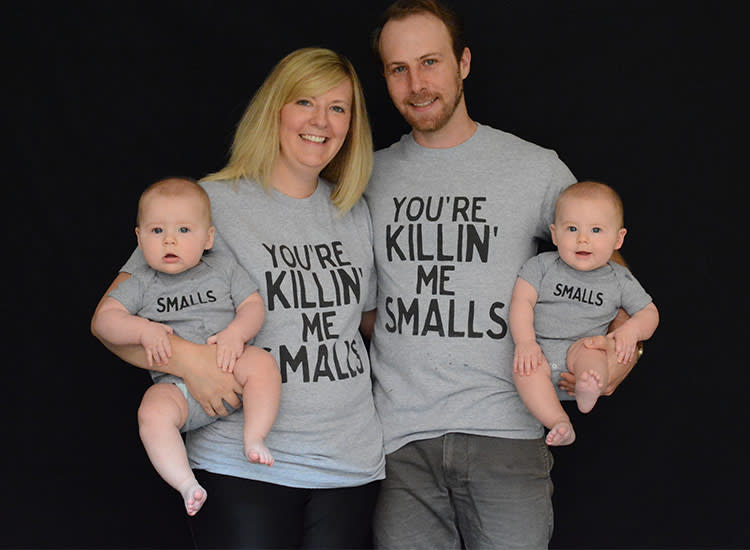 Needless to say, the couple was over the moon. In the months leading up to her due date, they educated themselves as much as they could for life with twins. This meant classes, books and online groups galore. But in the end, the only way to truly learn is by being thrown right into it. “We’ve definitely become more efficient in what we do and have always tried to keep a good sense or humor to not take life too seriously,” Ben shares. “I think that attitude helped us get through everything we’ve been through.”

The moral of the story: expect the unexpected. “None of this goes according to plan or the way you think it will,” Caitlin says. “Everyone’s journey is unique and it doesn’t always work out for couples, so we were incredibly lucky with how everything worked out for us.”

Facing infertility takes a toll on every aspect of your life. Talking to others about your journey helps make the blow bearable, but lots of people have trouble putting their feelings into words. To help you along the way, hear from others who know what it’s like. Caitlin has so much more to share about her journey, and plans to launch a blog, Plan to be Surprised, devoted to doing just that. Because at the end of the day, you’re not alone.