Listen up: 4 out of 5 infant formulas in the US are made from cow's milk.
Save article
ByAnisa Arsenault
Associate Editor
PublishedJan 2018 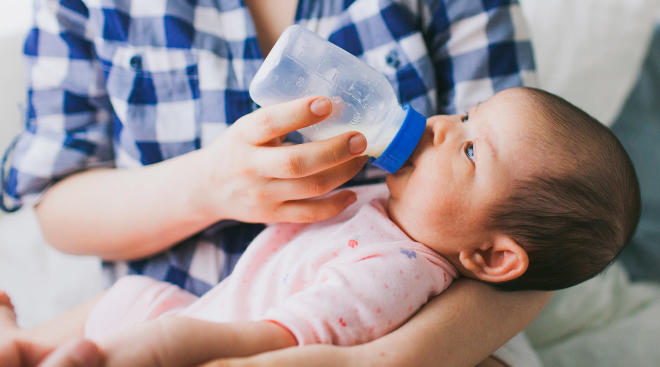 Powder versus ready-to-feed, milk-based versus soy-based—when it comes to baby formula, parents certainly have options to choose from. But above all, cow’s milk-based formula reigns supreme, accounting for about 80 percent of the formula sold in the United States. Which is why reports linking it to increased rates of Type 1 diabetes are especially alarming.

Because the potential link was widely discussed, but with little evidence, researchers decided to take a closer look at the proteins found in cow’s milk formula. Previous results from a small study of 230 infants suggested that whole proteins from cow’s milk trigger the immune reaction that leads to type 1 diabetes. So researchers wondered if avoiding whole proteins could eliminate the problem. Their alternative was hydrolyzed-casein formula, which breaks the cow’s milk proteins down into tiny parts. But they needed a larger sample size of babies to test their theory. They were able to recruit 2,159 infants from 15 countries, each of which had a family member affected by the disease.

To conduct the study, researchers randomly assigned the infants to two groups. Half received standard cow’s milk-based formula, complete with whole proteins, while the other half received the broken down formulation. Infants had to consume the formula for a total of 60 days, minimally, by the time they reached 6 to 8 months old.

After following the children for an average of 11.5 years, researchers were able to gauge the long-term effects of conventional cow’s milk formula: It doesn’t play a role in Type I diabetes. The results were published in the Journal of the American Medical Association. Ultimately, 7.6 percent of the babies consuming conventional cow’s milk formula developed diabetes, while 8.4 percent of the babies receiving the altered version became diabetic.

“This study shows no statistically significant difference between the groups in terms of how many of these children developed diabetes; therefore, it helps provide a long-awaited, definitive answer to the controversy regarding the potential role of cow’s-milk formula in the development of type 1 diabetes,” says study author Neil H. White, a professor of pediatrics and of medicine at Washington University School of Medicine in St. Louis. “It also indicates there is no evidence to revise the current dietary recommendations for infants at high risk for type 1 diabetes.”

Hopefully, this offers relief to formula-feeding parents. But remember, cow’s milk-based formula is not your only option. See our full list of the different kinds of baby formula, and why you may want to consider them.

How to Buy: Baby Formula

Goat Milk May Be Beneficial for Infants, Researchers Say

Formula Is Getting Closer to Breast Milk Than Ever

Ask the Pediatrician: What Are the Best Kinds of Formula?

'Why I Formula-Feed My Baby'