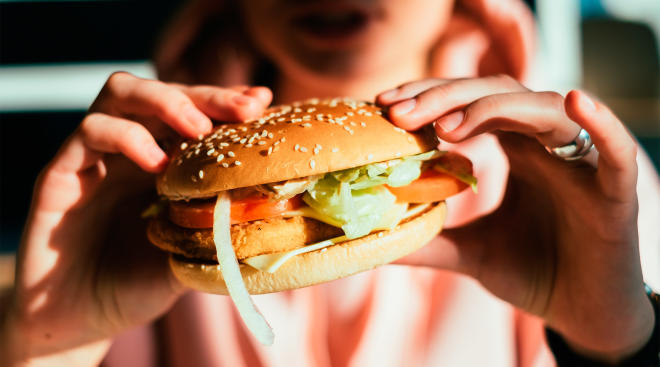 It’s not like you thought fast food was going to help you get pregnant. But a new study suggests we can officially add it to the list of things to avoid while trying to conceive. Compared to women who never or rarely eat fast food, women who have it four or more times per week take a month longer to get pregnant.

That’s the result from a major study published in the journal Human Reproduction. Midwives surveyed 5,598 first-time-pregnant women from Australia, New Zealand, the UK and Ireland about their diets during their first antenatal appointments. Lead study researcher Claire Roberts boils down what they learned:

“The findings show that eating a good quality diet that includes fruit and minimizing fast food consumption improves fertility and reduces the time it takes to get pregnant.”

Fruit, in particular, seems key to timely conception. Compared to women who ate fruit three or more times per day in the month leading up to conception, women who ate fruit extremely rarely—less than one to three times a month—took a month longer to get pregnant. In fact, while researchers set the risk of being infertile (taking over a year to get pregnant) at 8 percent among the women they evaluated, they found infertility risk increases to 12 percent among those not eating fruit. Among those eating the highest rates of fast food? Infertility risk increased to 16 percent.

If you’re wondering how researchers defined “fast food,” they’re talking about the following items purchased from takeout restaurants or fast food chains, not any versions of these foods made at home or purchased from a supermarket:

So while you can sort of cheat the system by making your own pizza at home, we have some better ideas for fertility-boosting foods. From leafy greens to Greek yogurt, see the full list here.

Can a Mediterranean Diet Boost Your Pregnancy Odds?