“Our family learned a scary lesson yesterday, and I feel like more people should know what we didn’t involving something so many people have laying around their household.”
ByStephanie Grassullo
Associate Editor
PublishedDec 2018 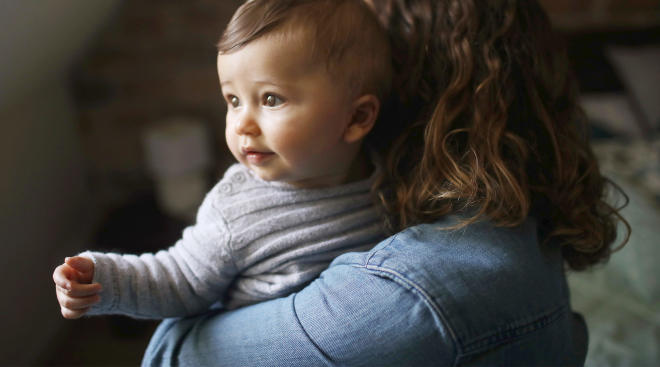 Anyone with a young kid at home knows all about how important it is to baby proof the house. But even those who tread with caution still find themselves in scary situations sometimes.

Take mom JennaJoy Ingraham, who recently experienced a terrifying incident with her 18-month-old son, Greysen. While she and her husband, Casey, were finishing up getting ready for church, the little boy got his hands on a bottle of baby oil and quickly took a sip. It wasn’t long before the couple realized something was terribly wrong.

“Our family learned a scary lesson yesterday, and I feel like more people should know what we didn’t involving something so many people have laying around their household,” says the mom as she begins her cautionary tale.

“Our 18-month-old, Graysen, grabbed a bottle of baby oil off the counter and drank a little bit around 10 a.m. yesterday morning while we were getting ready for church,” Ingraham recounts. “Casey caught him quickly and took it away. Gray made funny ‘yucky’ faces because of how it tasted and we thought that was the worst that happened.”

But they quickly learned they were mistaken.

“A couple of minutes later, he started acting lethargic: Falling asleep sitting up and not answering anyone. Basically awake, but non-responsive with the slowest blinks I’ve ever seen,” the mom explains. “When we picked him up, it was just dead weight and he kept trying to fall asleep in our arms.”

While the pair was under the impression that “drinking a little baby oil” couldn’t be too dangerous, they decided to phone the on-call nurse to check if his behavior was out of the ordinary. But when the nurse suggested they call Poison Control, the parents went into panic-mode.

“They mentioned most parents don’t realize how dangerous baby oil can be if inhaled. Poison Control told us they would call the hospital to let them know what was coming, and that we needed to take him now. Cue my intense panic,” Ingraham recounts.

Doctors ran X-rays on Greysen and kept the little boy at the hospital for a few hours to monitor his situation. Most shocking for the parens to find out was that an infant consuming baby oil was equivalent to an adult drinking gasoline.

“What?! How did I not know that? How has no one I have told so far known anything about how dangerous baby oil can be,” the baffled mom asks herself.

The eye-opening experience led the mom to do more research, and the findings were frightening. As stated on the Poison Control website: Coughing, choking and fever are common signs of hydrocarbon aspiration. “Lung irritation and pneumonia, even death, can result. Symptoms can happen quickly–within a couple of hours or even sooner. If there are no symptoms in 24 hours, the child should remain fine.”

Luckily, after a few hours under the watchful eyes of doctors, Greysen was cleared to go home.

“So today, I feel crazy anxious, but extremely lucky as I cuddle my tiny guy and obsessively listen for any changes in his breathing,” she shares. “I also really feel the need to spread the word of how dangerous that little bottle all new mommies get at their baby shower or have next to the bath or changing table actually can be.”

This scary story is a reminder to all parents to learn about all the household products that are actually dangerous for baby. And make sure your tiny tot isn’t playing with these seven everyday objects.