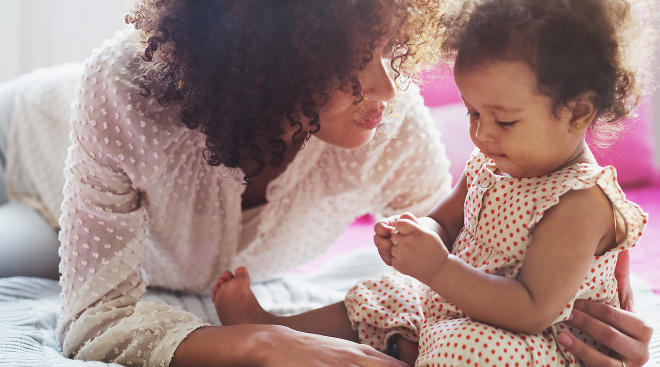 A study from the University of Virginia and the Max Planck Institute for Human Cognitive and Brain Sciences found that a caregiver’s early social interactions with baby directly affect baby’s production of oxytocin—commonly known as the “love” hormone—and, consequently, their behavior.

The researchers found that if the new mom actively talked to, stayed close to and was engaged with baby during free-play, then, a year later, the child’s oxytocin system was increased. This data was confirmed by the child’s nature, which was reported to the researchers by the parents. The study found babies with lower levels of oxytocin were “more temperamental and less well balanced.”

Oxytocin plays a huge role in social interaction and bonding, helping people relate to others and strengthening trust and closeness in relationships. The hormone is often released when people hug or kiss a loved one, earning it the nickname the “love” or “cuddle hormone.” .

In the study, researchers monitored a five-minute free-play interaction between 101 pairs of moms and their 5-month-olds, setting up cameras to record the behavior and facial expressions of both the moms and the babies. The moms were told to play with baby as they would at home. They were given four toys and one infant play book for the session. The researchers then collected saliva samples from each group, doing so again when the babies were 18 months old.

“We were interested in exploring whether the involvement of the mother, in the original play session, would have an influence on the oxytocin receptor gene of the child, a year later," stated Kathleen Krol, a Hartwell postdoctoral fellow at the University of Virginia, in a press release.

The findings prove that, while nature and genetics play a role in who we become as adults, so do very early social interactions we have with our caregivers—and that includes both mom and dad, as both can influence baby’s mental and physical development through changes to baby’s oxytocin system.

It’s important to spend time playing with your little one, even if you can only manage to do so for an hour or two a day. If you’re wondering what else you can do to support baby’s brain development, check out our top tips.

Why It’s Totally Okay to Let Your Child Be Bored (So Drop the Guilt!)

30 Cool Piggy Banks for Kids We Put Our Money on

The Magic of Montessori: Life Changing Tips to Declutter Your Child’s Play Space

7 Ways Montessori Promotes Independence (So Parents Can Work From Home)

These Are Amazon’s Top Children’s Books of 2020

Foolproof Last-Minute Holiday Gifts for Everyone on Your List