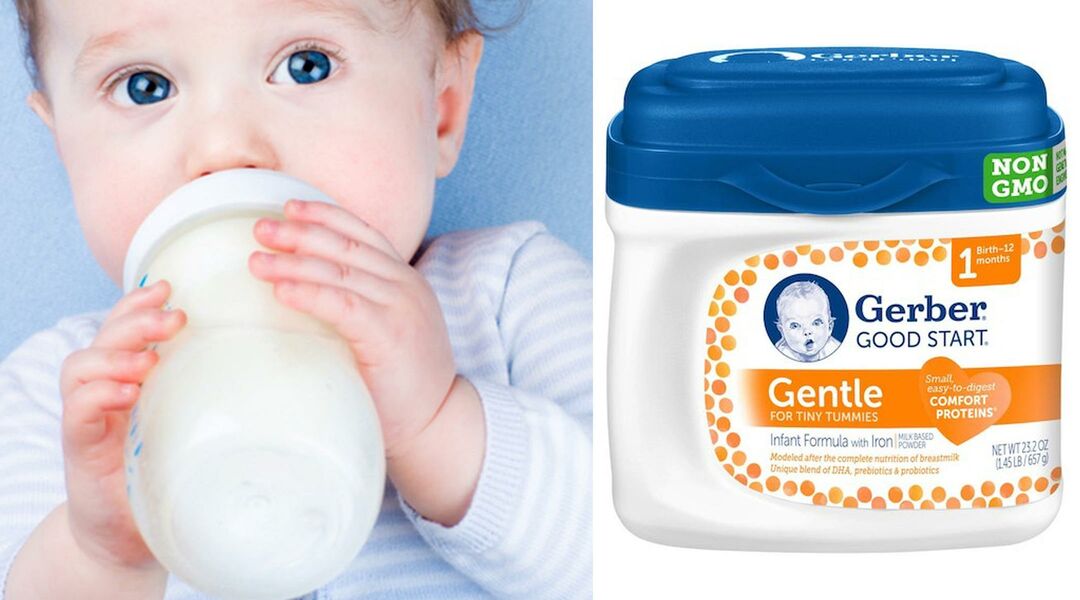 Infant formula is supposed to be a highly-regulated industry. After all, it’s the sole source of nutrition for babies who can’t breastfeed, and a supplemental source for many who can. However, contamination scares from French formula company Lactalis have prompted a closer look at what we’re feeding our babies. Now, Nestlé is under investigation, specifically because of exaggerated health claims and ingredient inconsistencies.

In a new report titled Milking It, the Changing Markets Foundation takes a look at Nestlé formulas around the world (you may be most familiar with Gerber Good Start), comparing over 70 infant milk products in 40 countries for babies under 12 months old. This is what their conclusion boils down to:

“Nestlé is in fact not driven by nutritional science but instead by a sharp and prioritized focus on profit and growth at the expense of vulnerable infants.”

The Changing Markets Foundation explains that something called the WHO/FAO Codex Alimentarius Commission—referred to throughout the report as Codex—sets global standards for formula. While they’re voluntary, they’re the benchmark composition standard, and some countries even use Codex standards as law. Codex says that protein, lipids, carbohydrates, and specific vitamins and minerals are mandatory in infant formula. Other ingredients, like amino acids, DHA and “friendly” bacterial cultures are allowed, but optional. This introduces the report’s first gripe with Nestlé: how they choose to market some ingredients and not others.

“Our scoping research found that the voluntary addition of those so-called (by the manufacturers) ‘premium’ nutrients—particularly DHA/ARA, ‘friendly’ bacteria and non-digestible fibers—is strongly linked to the marketing of the infant milks themselves,” the report says. “On the other hand, marketing claims relating to other substances, such as minerals and vitamins—the addition of which is mandatory, and therefore plays no role in product differentiation—are much less commonly made, despite being nutritionally important.”

Their point: These “premium ingredients” are a marketing ploy. Perhaps even worse, the ingredients are inconsistent around the world.

Take sucrose, for instance. Organizations like the European Food Safety Authority advise against its inclusion in formula, recommending lactose as the preferred carb (unless a baby is lactose intolerant). Some of Nestlé’s infant milks sold in Brazil and Hong Kong play to this advisory; for example, Brazil markets lactose as a premium ingredient, and the Hong Kong labeling states, “No sucrose has been added…for baby’s good growth.” Still, researchers found two Nestlé formulas in South Africa contained sucrose. Similarly, they also found added flavorings in some products and not others, despite the fact nutrition experts advise against any flavorings in infant formula.

“These examples illustrate how Nestlé goes against its own advice in certain markets, underlying a use of nutritional science as a marketing tool rather than a criterion for product formulation in the interests of child health,” the report reads. “If an ingredient (such as sucrose) is not healthy, then it should be in none of their products. Anything other than this approach seriously undermines Nestlé’s commitment to science and reputation as a nutrition provider.”

The report also takes major issue with the way Nestlé formula composition is marketed on the packaging. Codex prohibits companies from making claims that could discourage parents from breastfeeding, including language that compares formula to breast milk in any way. A mother’s breast milk is constantly changing to adapt to a growing or sick baby’s nutritional needs. Formula can’t do that.

“Such compositional limitations are one reason why attempts to humanize infant milks through comparison with breast milk are banned under the Code,” the report says. Yet if you’ve purchased Gerber Good Start Gentle—or another Nestlé formula like Beba, Illuma or Nan—you’ve probably been lured by the a claim like “Our closest to breast milk” or “Modelled after the complete nutrition and gentleness of breast milk for babies.”

And finally, the report calls out Nestlé for “generally phrased, vague claims” with no scientific evidence. Take a look.

A fair question: Why Nestlé? Other formula companies are guilty of vague claims and questionable ingredients, and exaggerated marketing is (usually) not a crime. The Changing Markets Foundation explains the reason for investigating Nestlé was two-fold.

“First, Nestlé is the global market leader, and has the widest geographical reach for infant milk products,” the report says. “Second, Nestlé takes particular pride in its scientific credentials, and openly states that it aims to become the ‘the world’s leading nutrition, health and wellness company’. This report aims to explore the evidence behind those credentials in the context of its infant milks range. It asks: ‘Is Nestlé’s commitment genuine, or is it really a marketing strategy’?”

That answer might be no. Reuters says Nestlé will respond in the next few days.

Q&A: Which Formula Should I Use?