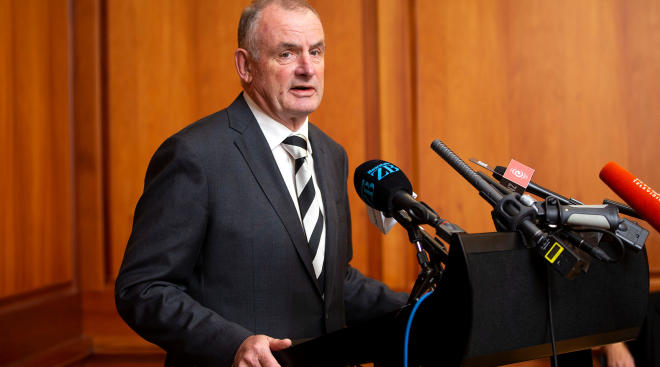 It was anything but business as usual during a recent New Zealand debate in the House of Representatives. House speaker Trevor Mallard presided over the debate accompanied by an adorable sidekick, one of Mallard’s fellow lawmaker’s new baby. Photos and films of the sweet interaction were shared to social media, where they have since received worldwide acclaim.

“Normally the Speaker’s chair is only used by Presiding Officers, but today a VIP took the chair with me. Congratulations Tāmati Coffey and Tim on the newest member of your family,” Mallard writes after sharing a couple of pictures of himself with the baby on Twitter.

Coffey, Labour MP for Waiariki, and his partner, Tim Smith, announced the birth of their son in July. The day of the parliamentary debate marked Coffey’s first day back from paternity leave, according to BBC. A father of three, Mallard helped take a load off the new dad’s hands at work by caring for the child. Seemingly more than happy to step in as babysitter, he’s shown smiling while cradling and feeding the baby boy during the session. The youngster also did his part to weigh in, making a gurgling noise at one point when Mallard announces that one lawmaker’s time to speak in the debate expired.

Others in attendance also enjoyed the adorable addition to the day. “Lovely to have a baby in the House, and what a beautiful one,” says Gareth Hughes on Twitter.

“I’ve felt really supported by my colleagues from across the House,” Coffey tells Newshub. “Babies have a way of calming down the intense environment of Parliament and I think we need more of them around to remind us of the real reason we are all here.”

Coffey is the latest MP to bring his baby to parliament. Jo Swinson, Leader of the Liberal Democrats and Liberal Democrat MP for East Dunbartonshire, attended a debate with her baby last year, and Australian Senator Larissa Waters breastfed her baby in parliament back in 2017, according to BBC. Plus, who can forget when New Zealand’s Prime Minister, Jacinda Ardem, made headlines and history when she brought her baby with her to her debut speech at the UN in New York,.